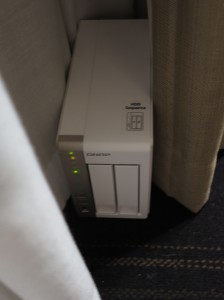 A trend that is showing up with QNAP and some other NAS vendors is to release NAS units that implement 2.5” hard disks or solid-state drives rather than the regular 3.5” variety.

Here, QNAP’s latest 4-disk 2.5” variety known as the TS-451S is able to have the same footprint as a 2-disk unit that uses 3.5” disks. It may be about being able to implement a disk cluster that has some hard disks and solid-state drives or simply being able to gain more shelf space. It is very similar to an earlier Thecus NAS that could run 2 of the 2.5” disks, effectively being a “pocket rocket”.

But let’s not forget that this unit will run QNAP’s QTS 4.1 standard operating system with the ability to download extra function-specific apps. It could become a direction for the likes of WD and Seagate to offer 2.5” hard disks and solid-state drives pitched at these units and allow for the highly-compact units to court a huge range of applications where space is at a premium, including in-vehicle or portable use.