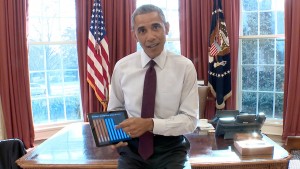 He’s spoken up for Net Neutrality and competitive Internet service

I have previously given a fair bit of covered to the issue of Net Neutrality and competitive Internet service in the USA.

Now the FCC have voted 3:2 to pass rules that place Internet service providers in the USA under the remit of Title II of the US Communications Act. This treats them like regular communications services rather than as information services and proscribes discrimination of data traffic sent to their customers.

It has been part of an ongoing battle by FCC, human-rights organisations, technology lobby groups and Internet content providers against established telecommunications and cable-TV companies to assure a level playing field for Internet-hosted data traffic. This is because of the existence of “over-the-top” TV and telephony services like Netflix, Hulu, Skype and Viber offering services competing with established cable and telephone services.

The rules ban paid prioritisation and the blocking and throttling of lawful content and services and are described as the “bright-line rules”. They also include forbearance so that certain rules like telephone operator service requirements don’t apply to data carriers like ISPs.

But, as I have observed, incumbent telecoms and cable-TV firms along with conservative pro-business reduced-government lobbies have been standing against the Title II rules. The counterclaims offered include increased government regulation of Internet service with the inability to innovate and I would see them being valid as long as sufficient and sustainable real competition exists in the Internet service market.

The other gap that hasn’t been looked at is establishing a mandate for universal broadband access especially in to rural areas where there isn’t the likelihood of gaining decent broadband service. This includes provision of this goal using cost-effective technology.

What then needs to happen is for action to take place to assure real competition for telecommunications, pay-TV and Internet service in the USA and to proscribe redlining of communities that are deemed to be unworthy of decent Internet service. This can be taken on not just by the FCC but by other federal government departments like the Department Of Justice or the Federal Trade Commission.

What will also be interesting to see is whether these rules will withstand a legal challenge that Comcast, AT&T and the like put up in the US Supreme Court.

President Obama speaks out for real competition in US Internet service

New York State to raise the bar for US broadband