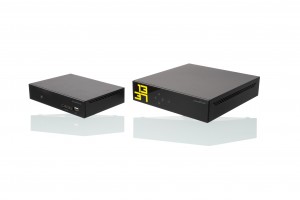 Free have launched into the French market the latest triple-play Freebox. This is not to replace the Freebox Révolution but to be offered as a cheaper hardware option for your high-value have-it-all service that they provide. It is based on a simplified design like the other Freebox products yet is designed to be future-ready.

The Freebox Server Mini is considered a highly functional Internet gateway device which can work with ADSL2, VDSL2 or Fibre-to-the-premises Internet services provided by Free. Like other Freebox gateway devices like the Freebox Révolution, it runs the Freebox OS which has a user interface not dissimilar to a QNAP NAS or a new Linux distro’s graphic user interface. The LAN is based on a 4-port Gigabit Ethernet switch and 802.11n N450 three-stream 2.4GHz Wi-Fi. There is the ability to connect audio equipment so it becomes an audio player in the same manner as the Freebox Révolution Server.

If you want to store data to this device, you would need to use an external hard disk that is connected via eSATA or USB 3.0. This allows for it to be a central “data store” for the home network, including recording TV content from the Freebox Player Mini. As well like other Freebox devices, it has a single-line analogue-telephone adaptor along with a femtocell for mobile phones that are connected to Free’s mobile service.

The Freebox Player Mini is the first set-top box issued by a French telco to have the latest expectations. These include an RF remote which is based on Bluetooth 4.0 Smart technology, the ability to supply 4K video via its HDMI output along with the fact that it runs Google’s Android TV operating system. It also makes this set Google Cast ready and able to be a Chromecast box of sorts.

Another bonus that this set-top box has is voice guidance courtesy of a microphone integrated in to the remote control. There is also an SD card slot so you can quickly show your digital pictures straight from your camera’s SD card “film”.

The price for these devices is EUR€29.95 per month if you are setting them up as one of those legendary French “triple-play” services which encompasses phone calls to more than 100 countries, more than 200 TV channels on the TV, Freebox Replay catch-up TV, or full-on “hot-and-cold” running Internet. The Android-based Freebox Player Mini is available for an extra cost of EUR€2 if it is to be an extra set-top box for a Freebox Révolution setup.

What I see of these devices is that there is a willingness for the highly-competitive French Internet-service market to step forward but stick to commonly-known commonly-available standards rather than head off down their own paths.

Hardware video transcoding to be a feature for NAS units