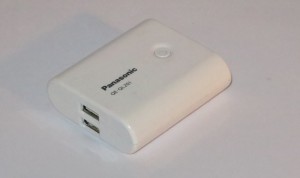 Laptops could be benefiting from external battery packs like this one

Just after Apple had premiered their latest iteration of the MacBook laptop, the computer press have been focusing on this computer being equipped with a USB Type-C connector as its only connector. Subsequently, Google premiered their latest iteration of the Chromebook i.e. the Chromebook Pixel which also has this connection and were making murmurs about this for the Android platform.

Both these computers use the USB Type-C socket as a data / video / power socket and it is an example of things to come for ultraportable notebook computers, because of the low-profile design of these sockets. What is to be the advantage of this connection and the associated USB Power Delivery device class?

Look at what has happened with the smartphones which have come with USB-ended power cables and battery chargers having USB sockets on them. It has led to innovation in how the battery charger is designed because there isn’t any worry about different voltages needed for different smartphones or other gadgets.

For that matter, a highly popular charger type for smartphones especially is the external battery pack which connects to the smartphone’s charging socket. Most of them can be connected to another charger that plugs in to AC power or a car’s cigar-lighter socket to charge up, then they can either charge up the phone’ onboard batteries or provide extra runtime power for that device.

This kind of power universality hadn’t reached laptops yet but, thanks to USB Type C and Power Delivery, it will. These designs will call for a standard fitment and set of power specifications which will open up a common requirement for power supply devices.

The article highlighted the possibility of manufacturers supplying power-supply devices that work with a large number of laptop computers without having consumers worry about whether the power device will work properly and safely with their laptop. They even extended the possibility of external battery packs that are terminated with the USB Type C connector so that one can benefit from longer running time from these batteries.

They also highlighted the fact that Apple would be moving away from its MagSafe power connections just like they have with their Apple Desktop Bus connections. What I see of this as well is that it’s not all about keeping within their own universe but “working beyond” with everyone else. The billion-dollar question yet to be asked is whether Apple will dump the Lightning device-side connection on their iPhone, iPad and iPod Touch devices when they release subsequent generations of these devices, or are this considered by Apple and their fanbois as the “crown jewels” and have to have Apple’s own connections?