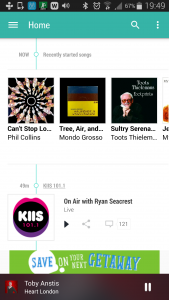 If you have Android Auto, you should get TuneIn Radio | Android Authority

The new smartphone platforms are working together with the TuneIn Radio app to bring Internet radio to the car.

Those of you who may have cottoned on to Spotify or similar online music services may have forgotten about what Internet radio is all about. This is where traditional radio broadcasters run an Internet stream that is effectively a simulcast of what you would hear on a radio that was tuned to that station. In some cases, it may be seen as the “new shortwave” because of the ability to listen to “out-of-area” radio like overseas stations.

The TuneIn Radio app which has been developed for just about all of the desktop and smartphone operating systems has been able to bring the joy of Internet radio to your laptop, smartphone or tablet in an easy-to-find manner. Here, you could be in Australia where commercial popular-music radio doesn’t excel on variety but you could listen to a station like Heart London, known for their large variety of pop music from the flare-flappin’ disco-infused 70s to new, on your smartphone.

In the early days of HomeNetworking01.info, I raised the concept of Internet radio in the car in response to a question a teenager who was about to get his driver’s licence raised when he heard an Iranian station on an Internet radio that I previously reviewed.  There have been some attempts by car-radio manufacturers and vehicle builders to achieve this goal as part of the connected car. Now TuneIn Radio had written in code to their iOS and Android apps to make it work tightly with the Apple CarPlay and Android Auto in-dash infotainment platforms. For that matter, these platforms are available in an aftermarket form courtesy of Pioneer but Alpine and Kenwood are intending to roll their own versions of head units with these platforms out soon.

Owing to the nature of Internet radio, both these implementations wouldn’t provide the same kind of “few-control” experience associated with tuning for new local stations on the AM and FM bands with an ordinary car radio. Personally, I would prefer to have TuneIn Radio give drivers one-touch access to all their favourites whether through “paging” through each station in the favourites or a list of stations on the screen that they can touch. This can provide a similar experience to what most of us have experienced when “jabbing” the preset buttons on the car radio to find what one of our favourte stations comes up with.

At the moment, work will need to be done to allow mapping of hardware controls to CarPlay and Android Auto interfaces so that “up-down” and “numbered-preset” buttons on the dashboard or steering wheel can be of use with these interfaces. This will achieve support for tactile control of music apps using familiar car-audio interfaces.

At least what is coming through is that Internet radio, along with Spotify and similar services, is being valued as part of the connected car in many different ways.

A Surface Book variant is actually a portable gaming rig