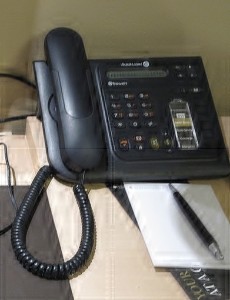 This article has highlighted how the phone in a hotel room has earnt its keep. Primarily, this was seen by a hotel or motel as a revenue-generating device because of the local, long-distance and international calls placed by guests. It is even though guests who wanted to save money used services that allowed calls to be charged against prepaid cards, one’s own telephone account or credit cards; or made a brief call and asked the respondent to call them at the hotel.

This was taken further with guests carrying their own smartphones where they (or their employer / business) picked up the tab for the calls, along with VoIP services of the Skype or Viber ilk that offered voice or video calls for free.

But these phones still earn their place in the hotel room. Commonly they are used to contact hotel services like Housekeeping, the Front Desk or the restaurant to facilitate dinner bookings or in-room dining. For some older people or those at risk of strokes, diabetic comas or seizures, the phone can be used as part of an “are-you-OK” arrangement, something that has been of benefit for me. This also leads to these phones serving as a “preferred emergency contact point” because of it relating to the room you are calling from.

Increasingly hotels are deploying smartphone apps to allow you to facilitate these services in a more “express” manner and these work alongside the apps that run on the in-room iPads. Young people do use these apps but the in-room phone still serves as a fallback if you need to ask further questions or convey further details. this fallback applies if your smartphone’s battery dies or you want to use it for another activity.

But the phone suppliers are realising now that these phones can do more than just be a telephone extension. Traditionally, they offered a phone that has a built-in AM/FM clock radio but they are taking it further by integrating USB charging ports for your gadgets and / or Bluetooth speakers for music playback and speakerphone functionality.

What can be done to improve on these phones?

One way to improve on them in the hotel context is to have a site-configured Bluetooth device identity that reflects the hotel name and your room number. This would make it easier to identify what you are pairing your smartphone to.

Similarly, there will be an expectation for increased synergy amongst all of the technology within a hotel room including the devices a guest brings along with them and this synergy will be primarily room-focused. For example, it could be desired to pair your smartphone to the hotel room’s phone then have your music that you have on your phone play through the TV’s speakers for better and louder sound.

To some extent, USB connectivity can also be about adding functionality to these phones such as serving as an audio device or USB hub for computing devices.

What really is happening is that although it becomes so easy to write off certain technology due to other technology supplanting it, such technology can still serve a complementary role. This is important if we look at the devices beyond what they current do and look at what they can do.

Do we need to patent the style or interface of a device?

Controlling Wi-Fi and Bluetooth on your iOS 11 device