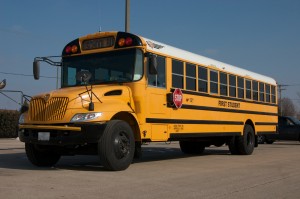 What to do for kids with no internet at home? How about parking a wifi-enabled school bus near their trailer park? | Hechinger Report

Coachella Valley in California is a rural community often associated with one of the trendiest rock music festivals in the USA. But when the musicians and fans pack up and leave this district, it reverts to having the attributes of a highly-disadvantaged rural community based primarily around trailer parks including lack of decent Internet access.

This is a situation that has been found to hold back secondary students who want to push on with their studies especially as today’s method of learning is focused towards online learning. One of many situations was that families were heading out to Starbucks or McDonalds or their schools’ parking lots to use the on-site Wi-Fi public-access Internet service. Another situation was a student staying back late at the school to complete an online assignment because their family couldn’t trust the Internet connection they had back at home.

But the Coachella Valley Unified School District have provided an innovative way of solving this problem by implementing in-vehicle Wi-Fi Internet connectivity in the school buses. Each bus implements a modem router connected to a mobile broadband service and dispersing the Internet access inside the bus and to 100 yards (91.44 metres) from the bus, similar to what some premium bus routes are doing. This network is set up for the school students to use through the use of particular software installed on the students’ tablets.

This setup would work when the vehicle is underway during a school-bus run but the school district wanted to run this setup with vehicles that are parked. They tried it out running the modem routers off the vehicle’s batteries alone but it could run for an hour with the batteries not providing enough juice to start the bus’s engine after that hour.

So one of the teachers put forward a solar-based solution to supply enough power from a roof-mounted solar panel array to run the modem router and in-vehicle network. Here, this didn’t put strain on the vehicle’s batteries thus avoiding the risk of losing the power needed to turn the engine over on a cold morning.

The buses would be parked in the trailer parks or near the communities so that students can wander down with their portable computing equipment to do the necessary study while under adult supervision. For example, if the community has a clubhouse or community hall, the bus would be near that facility.

There are further plans for the Coachella Valley Unified School District to take this concept further such as using donated or salvaged cars for the same purpose or even creating a community-access Wi-Fi Internet service. The usual remarks that I would most likely hear in relationship to enabling a disadvantaged community with real broadband is that such broadband services will end up being used for pornography viewing which would lead on to a downward family-abuse spiral.

Personally, I would also like to see the Coachella Valley Unified School District approach Google and others who roll out competitive broadband service to target the areas in the school district’s remit for competitive real-broadband service. Similarly, the school district could work toward helping the adults in their community by providing onsite public-access Internet facilities like an Internet café or Wi-Fi hotspot in these communities.

Another country hamlet in the UK equipped for next-generation broadband