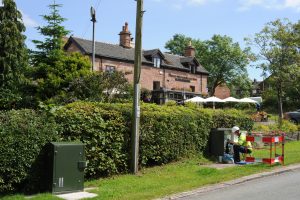 Community, council and BT to deliver FTTP to Cotwalton | ThinkBroadband

A typical UK postcode would covers a small neighbourhood represented by a street or something similar but it would typically cover a rural hamlet or small village.

What has just happened lately is that Cotwaldon, a small hamlet in Staffordshire which is represented by one postcode, was to benefit from improved next-generation broadband Internet thanks to a public-private partnership involving that community. This hamlet was able to only benefit from a very slow broadband Internet connection due to it being an ADSL service provided using a long telephone line which I suspect could be decrepit due to it being poorly maintained.

But what has happened lately was for a community partnership to allow households and businesses in that location to benefit from fibre-to-the-premises next-generation broadband. This was facilitated in a public-private manner through the BT Openreach Community Fibre Partnerships which also worked alongside the Superfast Staffordshire next-generation broadband effort funded by the Staffordshire County Council and the UK Government’s Broadband Delivery UK programme.

There will be similar activities taking place around some of rural UK as part of the BT Openreach Community Fibre Partnerships as part of “opening up” their FTTP effort to be launched next year. This is with their vision of publicly-funded local broadband-rollout efforts engaging with them to facilitate the rollout of next-generation real broadband Internet in to rural communities.

The BT Openreach press release highlighted some usage scenarios where this technology was relevant to Cotwaldon and its peer communities. One of these affected small business which effectively drives these rural communities – a builder who wanted to use the Internet to communicate with their customers and partners. But there were use cases that affected personal lifestyles such as downloading or streaming AV content reliably, or using online storage services as a data backup facility especially with high-resolution photos.

It is anther effort that brings real broadband to rural communities who are likely to be treated as second-class citizens by the telecommunications industry.