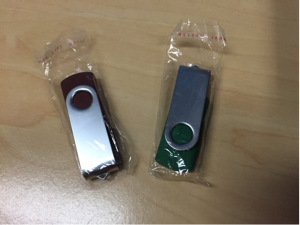 An issue that is being raised concerning data security is people loading data from USB memory keys that they don’t expect.

This has been used as a way to distribute malware to businessmen at conferences because these thumbdrives, like floppy discs and optical discs, have been accepted as a way to distribute conference content or “electronic brochures” and added to participants’ “show-bags” handed out at these events. The typical method of delivering a malware-laded USB stick was to abandon it at the venue, hotel or “watering-hole” bar and it would inspire people’s curiosity to pick up this memory key, plug it in to their laptop and load up what was on the stick.

Newer iterations of the desktop operating systems i.e. Windows or MacOS have made it hard to allow one to run a program off a USB memory key by default. Similarly, most of the desktop security software would implement removable-media scanning routines to automatically check for malware on a USB stick or other removable media. But there have been some USB thumbdrive variants which have had the firmware altered to run keystroke macros or meddle with network settings.

This situation has now been found to occur in a personal-computing context in some of the outer south-eastern Melbourne suburbs like Pakenham. This was where USB memory keys were left on households’ mail boxes and these thumbdrives were full of malware including fraudulent content-streaming offers. Infact Victoria Police even encouraged Australian householders who received these thumbdrives in their mailbox to contact Crimestoppers Victoria by phoning 1-800-333-000 or using the online form.

But the common security advice to deal with USB memory keys that you didn’t expect to receive is not to insert them in your computer. If you do expect to receive one of these sticks such as them being in a show-bag from a vendor or you receiving conference material on one of them, make sure that you have your operating system and desktop security software patched and updated.