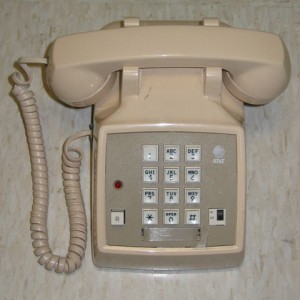 Is the US telecommunications industry heading back to the days of these phones?

An issue that I have been regularly covering is the reduction of competitive telephony and broadband service in the USA. This is thanks to incumbent “Baby Bell” telcos and cable-TV companies effectively paying state governments to pass legislation to proAhibit local governments from setting up their own broadband infrastructure to compete with these established providers.

The FCC had attempted to use its federal mandate to override these laws but these efforts were being struck down thanks to litigation instigated by these established companies. Again this was leading towards a telecommunications and Internet-service environment that is reminiscent of the “Ma Bell” era, with the price-gouging, poor customer service and onerous terms and conditions.

But Anna Eshoo, a Democrat who represents the Silicon-Valley area in the House of Representatives, had submitted a bill to Congress in order to assure the provision of infrastructure-level competition by local governments and communities. Here, this law – the Community Broadband Act of 2016 (PDF) would prohibit state governments from passing the telco-funded legislation that proscribes this infrastructure.

There is some doubt about the proposed legislation becoming law thanks to the US Congress also being subjected to lobbying and graft from big-business interests including the telecommunications and cable-TV cartels. But most of the US’s consumer-advocacy groups are behind the law in order to defend a competitive telecommunications and Internet market.

One major quote that was called out was the fact that the current situation is placing rural communities at a disadvantage because the “Baby Bells” or cable-TV companies wouldn’t either roll out decent-standard broadband or people in those areas would be paying monopoly prices for poor service.

As I have said before, the telecommunications and Internet-service market in the USA would need to be under strong surveillance in the context of antitrust and competition issues. This would include control over company mergers and acquisitions; and even the issue of whether legal action similar to what was initiated in 1974 with “Ma Bell” needs to take place with Comcast, AT&T and co.

MyRepublic launches an NBN Internet plan to game on with

Fiber Corp to offer competition to the NBN in Sydney