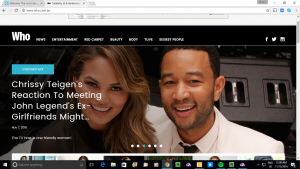 The most dangerous celebrities to look up on Google | BGR.com

An issue that has been raised is that searching for the latest news and gossip about a celebrity can be risky for your computer’s security. Panda Security even described it as being of risk to a business’s computer systems because office workers would do it during slow times in their workday. It is though this activity is still today’s equivalent of looking through the gossip magazines at the supermarket checkout or in the doctor’s waiting room.

This is because the Internet has made it easier to push up “fly-by-night” gossip Websites that are laden with malware and have these advertised.

It is also because there is a weakness that exists in the online advertising marketplace is that ad networks and publishers don’t subject the advertising that comes to these networks to thorough scrutiny on a safety perspective. This then allows online advertising to become a breeding ground for malware with such things as “malvertising” where scripted ads are used to “push” malware on to users’ systems. This is a topic I have raised because I am wanting to see the rise of a quality online ad marketplace that has the same level of respect as the advertising seen in traditional print media.

A similar situation happens whenever a new album or movie featuring a popular entertainer is released because sites and torrent files would pop up claiming to offer the material for free. To the same extent, this could include offers of “exclusive” photo, audio and video material relating to the content or its performers for free. The same thing also can happen with surveillance, personal-album or similar material that features celebrities in compromising situations and ends up being “leaked” to the public arena. Again these sites and the torrent “file-of-files” available to download would be a minefield of malware files if you aren’t careful.

The situation becomes worse during the time surrounding entertainment-industry awards events, the release of new headline content featuring the celebrities or whenever there are major personal events affecting these people such as new relationships or relationship breakups. The articles cited that people involved with the Hollywood entertainment scene are more likely to be targeted with fly-by-night malware sites, malvertising attempts and similar skulduggery. but I also would place at risk of this treatment the British Royal Family or past and present popular Presidents of the United States.

You can engage in the digital equivalent of browsing the gossip mags safely as long as you are sure of the resources that you are heading towards and don’t fall for the bait.

Computer security is about trusting your instincts