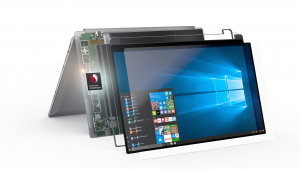 Smartphone Guts Are Coming to Windows Laptops, and It Could Triple Your Battery Life | Gizmodo

Microsoft had made some attempts at bringing Windows to the ARM RISC microarchitecture with a view to bringing forth cheaper computers. But they had failed thanks to silicon based on traditional Intel x86/x64 microarchitecture being offered at very cheap price points and able to natively run a large roster of software already available for that platform.

But they, along with Qualcomn who supply the silicon for most of today’s smartphones, have re-approached this through the vision of an ultraportable laptop computer or tablet that implements the same technology as one of the recent high-end smartphones and phablets. This has been drawn out alongside the recent crop of highly-capable 11”-14” 2-in-1 laptops that are making a strong appeal as a highly-capable alternative to the iPad and Android-based tablets.

But the computers that represent the “Always Connected PC” product class integrate a large battery along with the LTE-based wireless-broadband modem, both of which allow for a long time of computer activity without the need of Wi-Fi or daily charging. These would also support eSIM which allows for over-the-wire provisioning of mobile broadband service, including the ability to provide “international-focused” service for people roaming around the world. HP and ASUS have premiered a detachable 2-in-1 and a convertible 2-in-1 which are based on this technology.

Microsoft is pushing the Always-Connected PC for the workplace with a focus towards a managed computing environment. Here, it is about avoiding the need to connect to insecure public-access Wi-Fi networks or worry about whether you have the laptop’s power supply with you when you head to work or make that business trip.

I see it more as an answer to Apple’s iOS platform, Google’s ChromeOS platform and Samsung’s interpretation of the Android platform where the goal is to cater to a mainstream productivity-focused computing environment for work or school.

Here, the focus would be about interacting with cloud-based business / education software whether as a Web app or as platform-native software or simply working with information using standard office-productivity software, perhaps with some video playback or mobile-grade gaming. I also see this as a way for Microsoft to aggressively compete against the iPad in the household, education and business environment by encouraging its partners to offer tablets and 2-in-1s that have the same operational qualities as that tablet.

But it wouldn’t displace the Intel / AMD x86/x64-based computers which would be focused towards applications where performance is of importance such as serious gaming or photo / video editing. But as for running Windows software, the ARM-based variants of Windows will be implementing an x86 emulation layer that allows 32-bit Windows software to run on these computers. This is while Windows software developers who package software for the Windows Store will be encouraged to deploy code native to x86, x64 and ARM microarchitectures.

The big challenge now is for software developers and games studios to port the software that is on the iOS or Android platforms towards the Windows 10 platforms on all the microarchitectures. It would them make it viable for Windows to continue as a third force for “non-handheld” mobile computing.

Toshiba’s latest “portable-typewriter” laptop to beat according to CNET