Home
Current and Future Trends
What is the “hybrid radio” concept all about? 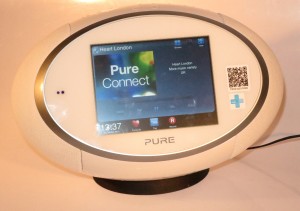 There is some interest in the concept of “hybrid radio” as a possible trend to affect broadcast radio in the online era.

Regular readers of this site will have seen reviews that I have done of Internet radios. These are radios and audio equipment the can pull in audio content via Internet-radio streams and, in most cases, local broadcast radio delivered via FM, AM and/or DAB+ digital radio. This is in addition to access to various online audio services like Pandora or Spotify or DLNA-capable content hosts on your home network.

The Internet-radio streams may be programs only available via the Internet or simulcasts of radio content broadcast in the radio station’s broadcast area using the traditional methods. They are usually selected through a directory like TuneIn Radio, Radioline or vTuner and their appeal has been to allow access to radio content via devices that only have Internet connection like smartphones, or to provide access to “out-of-area” radio content. This latter factor has a strong appeal for expats, language learners or people with a soft spot for a particular city or country including those of us who like a particular radio talent or programme available in that area but not locally.

It is also being augmented through access to podcasts or on-demand audio through the various Internet-radio directories or through online audio services, with most of the broadcasters making their own podcasts or similar content that they produce.

But there are efforts being taken towards improving the user experience for this class of device, especially where a set is capable of receiving content through traditional broadcast radio and the Internet. The typical user experience is to provide Internet radio as its own “band” or “source” on these devices.

The RadioDNS organisation is behind these “hybrid radio” efforts as a way to make the traditional radio become relevant to the Millennial generation who lives by their iPhones. It is also bringing the Internet radio concept towards automotive use, especially in a simplified manner that keeps the driver’s hands on the wheel and eyes on the road as much as possible.

One of the goals is to provide a “single dial” approach for locating radio stations. This is where you can see a list of local or overseas broadcasters and the set tunes in to that broadcast using the best method available for that broadcast.

Here, the set would choose the local broadcast medium if its radio tuner determines that the signal is strong enough for reliable reception, otherwise it would choose the Internet stream. It would also take advantage of the “follow this station” functionality in FM-RDS or DAB+ to choose the closest strongest transmitter for that station, something that would be important for national or regional radio networks with many transmitters or local stations that run infill transmitters to cover dead zones in their area..

There will be the ability to search for stations based on certain criteria like location, content genre, or station identifier, a feature that every one of us who uses a DAB/DAB+ digital, RDS-capable FM or Internet radio have benefited from. But this will be augmented by logo-driven browsing where the station’s familiar logo is shown on the set’s display or station logos appear as part of a station list.

The preset-station concept where you have access to your favourite stations at the touch of a button is augmented by the “single-dial” tuning process. Here, each preset-station space, represented by a button or menu list item, would point to a station and when you select that station, the set would choose the best method of receiving it whether broadcast or Internet.

It could then lead towards the idea of grouping radio station presets in order to suit particular users’ station preferences or occasion-based station lists. An example that comes to my mind where this feature would earn its keep is a close friend of mine who had regularly looked after some school children through the school holidays.

Here, the friend personally liked serious radio content like classical music or talk radio from the public-service radio stations. But when these children travelled with her, they listened to the local commercial (private) FM stations that ran pop music because they listened to these broadcasters when they are at home or in the car with their parents. In this situation, it could be feasible to allocate one preset group to the serious radio content and another to the popular-music stations, then call up this group when the children are travelling with the driver.

Such a feature will be considered highly relevant for automotive and portable receivers because these sets are more likely to move between different reception conditions. As well, it leads towards broadcasting and programming approaches that are totally independent of the medium that is being used to carry the broadcast programme.

A news broadcast could be supplied with a written summary of the key items in that bulletin. Similarly, a weather report could benefit from visual information like a map or a chart that shows what the weather will be like over a time period. Even traffic reports could be augmented with maps that show where the traffic jams or closed-off roads are, giving you a fair idea of where possible rat-runs could be taken.

Talkback and other deep-reporting shows could benefit from links to online resources that are relevant to what is being talked about.  It could even be feasible to “throw” contact details like hotline numbers or studio lines to one’s smartphone using one or more methods like a QR code shown on the set’s display.

Let’s not forget that the “hybrid radio” concept can also be about gaining access to these kind of shows in an “on-demand” manner similar to podcasts. This could even allow a person who heard one of these shows to set things up so that future episodes of the show can be saved locally for listening at one’s convenience. If the station primarily syndicates this content from other producers like podcasters or content-producing organisations for their own broadcast, they could then use the “hybrid radio” arrangement to allow listeners to find the shows as on-demand material.

For music radio programmes, there would be the ability to show the details about the song or piece of music currently playing. Some vendors could take this further by implementing a Shazam-style “buy this” option for the current track in conjunction with one or more “download-to-own” music stores, or to replay the song through an “online jukebox” like Spotify.

There is the ability for advertising-driven radio stations to allow their advertisers and sponsors to offer more than the 30-second radio commercial. Here, they could provide weblinks to the advertiser’s online resources so listeners can act on the advertised offers. This can also extend to online couponing or the ability to book one’s place at a concert or music festival that an artist whose song is currently playing is performing at.

The “hybrid radio” concept could be about simplifying access to radio broadcasts in a media-independent manner then allowing listeners to get the best value out of them.

Chromecast to find its way to your hotel room