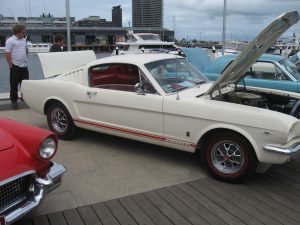 During the heyday of the “good cars” that was represented through the 1960s and 1970s, the major vehicle builders worked on various ways to approach younger drivers who were after something that was special.

One of these was to offer a “pony car” which was a specifically-designed sporty-styled two-door car that had a wide range of power, trim and other options yet had a base model that was affordable to this class of buyer. Another was to place in to the product lineup for a standard family-car model a two-door coupe and / or a “sports sedan” / “sports saloon” that is a derivative of that standard family car and built on that same chassis but known under an exciting name with examples being the Holden Monaro or the Plymouth Duster. This would be available as something that young people could want to have when they are after something impressive.

Both these approaches were made feasible through the use of commonly-produced parts rather than special parts for most of the variants or option classes. As well, there was the option for vehicle builders to run with variants that are a bit more special such as racing-homologation specials as well as providing “up-sell” options for customers to vary their cars with.

The various laptop computer manufacturers are trying to work on a product class that can emulate what was achieved with these cars. Here, it is to achieve a range of affordable high-performance computers that can appeal to young buyers who want to play the latest “enthusiast-grade” games on.

One of the steps that has taken place was to offer a high-performance “gaming-grade” variant of a standard laptop model like the Dell Inspiron 15 Gaming laptop, one of which I had reviewed. This approach is similar to offering the “Sport” or “GT” variant of a common family-car model, where the vehicle is equipped with a performance-tuned powertrain like the Ford Falcon GT cars.

But Dell have come very closer to the mark associated with either the “pony cars” or the sporty-styled vehicles derived from the standard family-car model with the release of the Inspiron G series of affordable gamer-grade laptops. Here, they released the G3, G5 and G7 models with baseline models being equipped with traditional hard disks and small RAM amounts. But these were built on a very similar construction to the affordable mainstream laptops.

These models are intended to replace the Inspiron 15 Gaming series of performance laptops and it shows that they want to cater to the young gamers who may not afford the high-end gaming-focused models. As well, the G Series name tag is intended to replace the Inspiron nametag due to its association with Dell’s mainstream consumer laptop products which takes the “thunder” out of owning a special product. This is similar to the situation I called out earlier with sporty vehicles that are derivatives of family-car models having their own nameplate.

The G3, which is considered the entry-level model, comes with a 15” or a 17” Full-HD screen and is available in a black or blue finish with the 15” model also available in white. It also has a standard USB-C connection with Thunderbolt 3 as an extra-cost “upsell” option along with Bluetooth 5 connectivity. This computer is the thinnest of the series but doesn’t have as much ventilation as the others.

The G5 which is the step-up model, is a thicker unit with rear-facing ventilation and is finished in black or red. This, like the G7 is equipped with Thunderbolt 3 for an external graphics module along with Bluetooth 4 and has the ability for one to buy a fingerprint scanner as an option. Also it comes only with a 15” screen available in 4K or Full HD resolution.

The G7 is the top-shelf model totally optimised for performance. This is a thicker unit with increased ventilation and implements high-clocked CPU and RAM that is tuned for performance. It has similar connectivity to the G5 along with similar display technology and is the only computer in the lineup to implement the highly-powerful Intel Core i9 CPU that was launched as the high-performance laptop CPU as part of the latest Coffee Lake lineup.

All the computers will be implementing the latest Coffee Lake lineup of Intel high-performance Core CPUs, being the Core i5-8300HQ or Core i7-8750H processors depending on the specification. In the case of the high-performance G7, the Intel Core i9-8950HQ CPU will be offered as an option for high performance.

Lower-tier packages will run with mechanical hard drives while the better packages will offer use of hybrid hard disks (increased solid-state cache), solid-state drives or dual-drive setups with the system drive (C drive with operating system) being a solid-state device and data being held on a 1Tb hard disk known as the D drive.

I would see these machines serving as a high-performance solo computer for people like college / university students who want to work with high-end games or put their foot in to advanced graphics work. As well, I wouldn’t put it past Lenovo, HP and others to run with budget-priced high-performance gaming laptops in order to compete with Dell in courting this market segment.