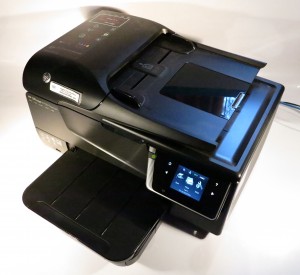 HP to implement a bug bounty program to assure high-quality secure firmware for their printers like thisi OfficeJet.

Over the last few years, dedicated-function devices like printers, videosurveillance cameras, routers and the like have been identified as a weak point when it comes to data security.

This has been highlighted through some recent cyberattacks like the Mirai botnet attack which was driven by dedicated-function devices like videosurveillance cameras running compromised firmware along with recent security exploits associated with home and SOHO routers being able to run compromised firmware. There is also the fact that manufacturers are building the same kind of computer power in to these devices as what would be expected from a regular computer through the 1990s or 2000s. There is also the fact that these devices can be seen as an entry point in to a network that handles confidential data or be used as an onramp for a denial-of-service botnet.

Hewlett-Packard have answered the reality of firmware integrated within their printers by starting a bug-bounty program where software developers, computer hackers and the like are paid to “smoke out” bugs within this firmware. Then this leads to meaningful software updates and patches that are sent out to owners of these devices, typically through an automatic or semi-automatic installation approach. It is a similar practice to what Microsoft, Apple and others are working on to make sure that they are running high-quality secure operating-system and application software.

This has been seen as of importance for printers targeted initially at the enterprise market because they would be processing significant amounts of company-confidential data in order to turn out company-confidential documents. But this approach would have to apply to home, SOHO and small-business machines as well as the larger workgroup machines found within the enterprise sector. This is because these kind of machines can be used by people working at or running a business from home along with those of us in charge of small businesses or community organisations.

By HP setting an example with their printer firmware, it could become a standard across other vendors who want to maintain a culture of developing high-quality secure firmware for their dedicated-function devices. This is more so as the consumer and enterprise IT market raises expectations regarding the software quality and security that affects the devices they use.