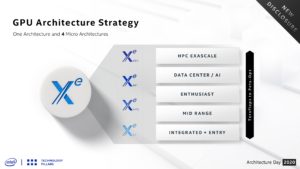 This year, Intel is strengthening their effort to change the graphics-processor marketplace and become a viable third factor. Previously, anything beyond bare-bones economy graphics needs was answered by NVIDIA and AMD with their discrete GPUs. These were typically in the form of a soldered-in graphics chipset installed in a laptop, all-in-one or small-form-factor computer or external graphics module, or a graphics card slotted into a traditional desktop computer or “card-cage” external graphics module.

But Intel has come as a viable competitor to these two established companies thanks to the Xe graphics platform that is part of their Tiger Lake silicon platform. At the moment, it is demonstrated with Xe integrated graphics silicon that performs on a par with NVIDIA’s MX mobile discrete graphics silicon, yielding something that could work well for gaming with a playable experience on Full HD displays or to capably handle most multimedia tasks.

Now Intel has shipped the Xe DG1 discrete graphics chip, also known as Xe Max, which will be positioned as a “step-up” option when it comes to mobile graphics needs, especially with ultraportable laptops. It may also be seen as a “baseline desktop” discrete-graphics option for all-in-one or small-form-factor desktop computers in those markets where desktop graphics performance is expected to be better than mobile / laptop graphics performance. Add to this the ability for vendors to offer “soldered-in” external graphics modules intended to give a Thunderbolt 3, USB4 or Thunderbolt 4 equipped laptop a bit of that extra graphics “pep”.

But Intel is also developing the Xe DG2 discrete graphics chip which offers higher performance than the DG1 and realised this as a working product through an electrical power-on test. This will be intended to be offered “above” the DG1 for those of us wanting more performance and will be based on the Xe-HPG architecture, answering needs like ray-tracing graphics in games. The question about this graphics processor is whether it will be offered as a high-volume high-performance product for “sports sedan” gaming laptops like the Dell G series or for boutique enthusiast-focused gaming computers.

The question that will be raised about Intel’s discrete graphics silicon is whether the goal is to directly compete with AMD and NVIDIA in the performance graphics technology market, thus becoming a significant third player and leading to improved value-for-money in this segment. Or to focus their technology towards particular use cases like mobile and low-profile system designs, graphics processors as ancillary processor uses like in servers, or other particular use cases.