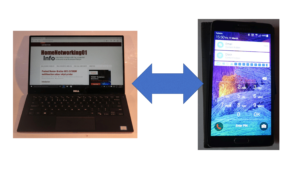 Microsoft is intending to have Windows able to run software written for the Android mobile operating system.

There was a previous attempt in the form of Project Astoria to simplify the process of porting Android apps to Windows 10. But recently the “Your Phone” subsystem offered to people who use certain Android phones the ability to run their apps in Windows. This worked around having Windows 10 working as a graphical terminal for your Android phone in order to run the Android software.

But Microsoft is using Windows Subsystem for Linux, currently used to run text-based UNIX/Linux environments on Windows,  as a basis to run Android software on your Windows computer. Firstly, Android is a Google-based fork of Linux intended for mobile-platform devices and this may make Microsoft’s job more easier.

Here the Android app will be run within an Android virtual machine on your Windows computer. This is in conjunction with WSL gaining support for X11 (X Window) and Wayland GUI subsystems for UNIX/Linux computing so that graphically-rich software for those platforms, including shells like GNOME can run on Windows 10.

There will be a requirement to make the Android app independent of Google Play Services because Google won’t release this functionality to devices other than native Android or ChromeOS devices. But this could be part of repackaging the software for the Windows platform.

This kind of compatibility will encourage Android software developers to write software that takes advantage of devices with large display surfaces like tablets and Chromebooks as well as smartphones. It will also make this software relevant to people who use Windows-based 2-in-1s like the Dell Inspiron 14 5000 or the Lenovo Yoga range.

There will be some app classes that will benefit from being made available through the Microsoft Store to run on Windows computers. Some apps like native clients for video-on-demand services will be about being able to enjoy these online video services on your laptop. The same holds true for sports scoreboard apps and mobile-platform “guilty-pleasure” games. Also there will be the idea of having Instagram, Snapchat and co running on your regular computer which will be valued by those of us who see a social media presence of importance for ourselves or our business efforts. Let’s not forget taxi and rideshare booking apps where there is the desire to use them from a regular computer perhaps to book rides for others.

Another use case is software written to make your Android phone a control surface for the smart home. It is primarily exhibited through “app-cessory” software that is written to convert your smartphone in to a control surface for various devices with the link facilitated using Wi-Fi or Bluetooth. But it can be software written to manage a smart-home platform like Amazon Alexa or Google Home and there may be the desire to have this run on a regular Windows computer.

Microsoft will need to have extra people to vet software that comes in to the Windows Store in order to keep malware out. This is because Google was overwhelmed with Android-based malware creeping in to their Play app store and they had to increase the number of people taking control over what ended up there. This danger will increase especially if it is feasible to “write once run anywhere” for both Windows and Android.

It is part of having Microsoft Windows 10 as the most flexible open-frame desktop operating system thanks to it supporting a wide range of software types: Progressive Web Apps, Win32 native Windows apps, Universal Windows Platform apps, UNIX/Linux software via Windows Subsystem for Linux and, to come, Android through Project Latte.

Having Windows, desktop Linux or ChromeOS on the desktop and Android on the mobile devices could be about building out a computing ecosystem that is totally about flexible open-frame computing.

Midget stereo amplifiers–could they be today’s equivalent of those early low-power “general-purpose” amplifiers?