Proprietary laptop cables could be a thing of the past, thanks to new USB-C spec | Windows Central

Gaming notebooks should get their own USB-C chargers soon – PC World Australia (idg.com.au)

Since I had bought my Dell XPS 13 9300 laptop computer, I had found that the charger that Dell supplied with that laptop was able to charge my Samsung Galaxy S8 Android phone quickly. It is in addition to this charger being an external power supply for use with this laptop when it’s away from my desktop and the Dell WD19TB Thunderbolt dock used as the hub there. This is thanks to both devices implementing the USB-C connection and USB Power Delivery specification.

But if you are using a gaming laptop, you will have found that you have to use a highly-powerful power supply to charge that computer up or run it from the mains. Dell had used some sort of proprietary kludge to allow some of their high-performance business computers to work with their WD-19 series of USB-C and Thunderbolt docks. 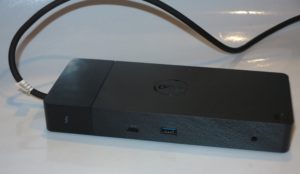 and docks similar to this Dell WD19TB Thunderbolt 3 dock will support that class of computer in a “single-cord” manner independent of whoever manufactures the host computer product.

Now the USB Implementers Forum have revised the USB-C Cables and Connectors standard to version 2.1. This creates an “Extended Power Range” class of cables and power supplies which has been scoped in to the USB Power Delivery specification. It allows the delivery of 48 volts at 5 amps but is required to support 50 volts at 5 amps at the most.

Effectively this is to extend the power supply capability for a USB Power Delivery setup to 240 watts and will apply to all USB and Thunderbolt standards that implement the same physical and electrical connection.

What kind of benefit will this achieve? It will be about high-performance computers like gaming laptops benefiting from a “single-pipe” connection that also supplies the power these computers need. It will also open up the market for cheaper higher-powered power supplies that can serve these computers no matter the power-source kind (AC mains power, DC automotive power or battery packs). This will be facilitated more with the use of GaN power electronics in these power supplies which will allow for highly-compact designs.

Some also see the idea of the USB Extended Power Range cables being able to power computing peripherals like 4K monitors or inkjet printers. In the case of 4K monitors, it may be about reducing the number of power outlets needed to power a multi-screen computing setup where some of the screens work at that resolution.

Could this also open up an extra feature for gaming-ready 4K TVs?

But I also see the idea of home-entertainment equipment like 4K gaming-ready TVs or home-theatre receivers being equipped with USB-C sockets that support PD to the Extended Range level along with DisplayPort alt connectivity.

Here, this would come in to its own where one cable powers a gaming laptop while running video and audio from that laptop to the TV’s screen or, in the case of home-theatre equipment, a connected TV or projector. The benefit here would be a “quick-to-connect, quick-to-disconnect” setup when it comes to using that big-screen TV in the main lounge area for playing games.

At least the USB Extended Power Range addition to the USB-C Cable and Connectors specification will underscore the idea of making sure that the USB Type-C is the universal multipurpose connector for today’s tech life.

For that matter, I had bought the Dell XPS 13 9300 laptop and the WD-19TB Thunderbolt dock at a discount from Dell thanks to my reviewing of some of their computer equipment on this site.

You can have Alexa print documents on your HP printer