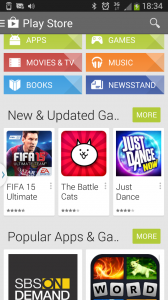 Spotify and Google Give You Choice in Paying Them (droid-life.com)

Apple will allow third-party app stores, because the EU mandates it | Mashable

Thanks to the “Fortnite” saga where Google and Apple were accused of slugging Epic Games with commissions for selling in-app commodities via their mobile-platform app stores, there has been a shake-up regarding how these app stores are run.

This has also been intensified with various jurisdictions instigating work on or passing legislation and regulation regarding a competitive market for online app stores. One of these is the European Union with the Digital Markets Act which targets large online services that have a gatekeeper role, along with the USA with its Open App Markets Act which targets app stores appearing on mobile and desktop computing platforms and other devices like games consoles or smart TVs.

What has happened so far

Google has taken steps to enable user-choice billing for in-app purchases normally made through their Play Store.

Firstly, they allowed people who use Bumble online-dating apps to subscribe directly with Bumble or via the app store. Now they have enabled Spotify subscribers to pay for their subscription either through the Play Store or direct with Spotify. Of course, some online services like Netflix and Britbox allow for direct payment for their subscriptions by requiring you to manage your account through the service provider’s Website.

But Google will implement this feature at the checkout point in your purchase by allowing you to select payment via Google Play or directly with the software developer. When you pay directly, you will see the online service payment user-experience provided by the developer including the ability to redeem their service’s gift vouchers, pay using PayPal or pay using a payment card platform they have business relations with. Or you pay using Google Play Store’s payment user interface that you would be familiar with.

Paying directly would mean that software developer or online service gets your money without having to pay a “cut” to Google for accepting payment via the Google Play Store. As well, the software developer or online service is at liberty to sign up with other payment means like PayPal, other credit cards like AMEX or Discover / Diners Club, or national account-linked payment platforms like EFTPOS, Carte Bleue or EC-Karte. There is also the ability for them to offer gift vouchers that go towards their offerings.

Another benefit that will come about if you pay for a subscription directly is that if you change to a different mobile platform, your subscription is kept alive rather than you having to reinstigate your subscription with the new platform’s app store and payment mechanism.

It also positions the Google Play Store’s online payment arrangement in competition with the software developer or online service thus improving the terms of business for accepting payment from customers. An example of this is both service providers providing a link with payment-anchored loyalty programs as a way to incentivise customers towards payment through their platforms.

Another direction being taken towards prying open the app stores is Apple baking  support for third-party app stores into iOS 17 which is the next major feature release of iOS. This is in addition to offering newer versions of the iPhone with USB-C ports rather than MFi Lightning ports for external connectivity. Here, this is due to intense European pressure to open themselves up to open markets by the European Union. But the support for third-party app stores would also come down to the Open App Markets Act that is being pushed through the US Congress.

Issues to be resolved

One issue that will have to be resolved is how the average smartphone or tablet user can install a competing app store to their device.

This is more about where a smartphone manufacturer or mobile operating system developer can get away with burying this option behind a “developer mode” or “advanced-user mode”. Or it could be about onerous requirements placed on software developers by mobile platforms when it comes to creating or publishing their software such as access to application-programming interfaces or software development kits.

The app stores will also have to be about selling good-quality compelling software and games. This is so they don’t end up as the equivalent of bulletin boards, download sites and optical discs attached to computer magazines where these resources were full of poor-quality software, known as “shovelware”.

Then there is the appeal of competing app stores to consumers and software developers. Personally I see these stores have initial appeal in the gaming sector with the likes of Steam or GOG existing on mobile platforms. Also I would see some software developers operate their own app stores as a way to maintain end-to-end control of their apps.

There are steps being taken by Google and Apple to liberate their mobile-platform software ecosystem even though it is under pressure from competition authorities in significant jurisdictions.

Another effort towards a more secure home-network router