This final instalment of my coverage of the Consumer Electronics Show will be focusing on some areas that have had high media coverage. This are the connected wearable devices that work with our smartphones, the connected home along with car-based technologies. The latter two are underscoring the idea that the online life is more than the home office or living room but more pervasive.

The arrival of hardware and operating-system support for Bluetooth 4.0 Low Energy for smartphones, tablets and laptops has opened up a flood of connected devices that we can wear.

This is primarily in the form of the smartwatch which is today’s connected iteration of the “nerdy” digital watch of the late 70s and early 80s. Some companies like Archos have started to join the smartwatch party by offering one that implements the e-paper display technology for US$85. This is while Samsung and Pebble came forth with newer smartwatch models.

Rather than have a smartwatch like the Galaxy Gear, Casio has gone down the path of premiering a Bluetooth-connected sports watch. Here, this one-time king of digital watches implemented a regular sports-watch design which uses a Bluetooth link to work with a fitness app and support a notification display on the watch. Another company also fielded a Bluetooth-linked notification watch that is equipped with an analogue dial, something that could come about for targeting the “dress watch” segment.

A similar device that is covering an increased amount of floor space is the “fitness band” which is a connected bracelet or wristband that measures physical activity and reports it to your smartphone or other computing device. They have been brought on by the success of the Nike FuelBand which provides this functionality when in use with the Apple iPhone.

LG even has developed the Lifeband Touch which is a hybrid device that serves as a  fitness band or a discreet smartwatch that works as an external display for your phone, courtesy of its touch-enabled OLED display. Herem the Lifeband uses sensors in the form of a 3-axis accelerometer and an altimeter. Razer also premiered the Nabu which is another of these fitness bands that double as a smartwatch.

Archos and Samsung have joined the fitness band party with the latter calling theirs the Galaxy Band to fit in with their Galaxy online lifestyle devices. Garmin even came forth with the Vivofit fitness band that is more about reminding us to be active rather than tracking actual activity. Pulsense even worked on a fitness band that also can “see through” skin to measure heartrate without the need for other awkward sensor requirements. 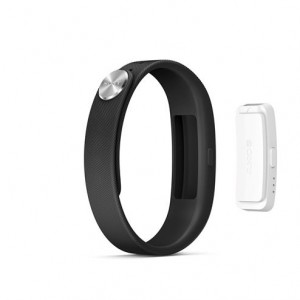 Sony Smart Band – an example of the many connected wearables surfacing this year.

Sony has taken another path through the use of a “Core” wearable device that works with different accessories and works on what they call “Emotion” rather than activity.

Other sports and fitness applications that are being drawn out include a Bluetooth-connected basketball with its own motion sensors to measure basketball technique, LG’s in-ear headset that tracks heartrate, a connected headband with integrated speaker, a heart-rate monitor for swimming goggles along with a brain-sensing EEG headband for games with exercise and an impact monitor for sports injuries.

Eyewear is also becoming an important “connected-wearable” device class thanks to Google Glass with its “augmented reality” function. Epson have answered Google by offering an Android-based augmented-reality glasses system in the form of the Moverio BT-200.

Even the concept of making jewellery connected has not escaped a British chip-maker’s mind. Here, CSR who are known for the Bluetooth aptX audio codec for Bluetooth applications have released proof-of-concept designs where a Bluetooth Smart chipset can be integrated in to jewellery to give it software-driven notification abilities.

But from what I see, I would find that the smartwatches and the fitness bands, especially those that have smartwatch functionality would be the more credible class of connected wearable devices. Similarly, devices for personal healthcare monitoring may earn some credibility with fitness enthusiasts, sports people and those of us who are managing chronic illnesses.

Internet Of Things and the connected home

This year’s CES is showing that this trade fair could follow the same path as the Internationaler Funkaustellung where small and large household appliances acquire show floor space alongside consumer electronics and personal computing. This is being underscored by the “Internet Of Things” and the desire to see the “connected home” come to fruition in the name of energy efficiency, security and convenience.

Samsung and LG have been using their stands to premiere their advanced whitegoods which interlink with their communications and AV equipment in their product portfolios, using these devices as an extra control or monitoring point.

Of course, this is being underscored by the various home devices being connected to your home network via Wi-Fi and working on the “app-cessory” model where you install controller apps on your smartphone. This has been underscored heavily with a lot of LED-based “app-cessory” lightbulbs that are being marketed in the US due to that market moving away from the classic incandescent bulb towards more efficient lighting and the LED lighting can allow for highly-controllable lights that can change colour at the flick of a switch. 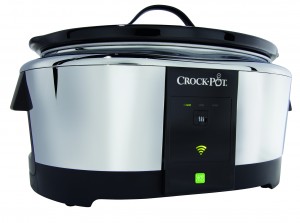 Belkin had shown more of their “Wemo” smartphone-based home-automation subsystem and added LED lightbulbs to this equation. They also partnered with Sunbeam Appliances to premiere a Wemo-enabled Crock-Pot slow cooker that can be managed from your smartphone. As well, they have the Wemo Maker which is a sensor or controller that links garage doors, sprinkler systems and the like in to the Wemo ecosystem.

The Lowe’s hardware-store chain have launched extras for their IRIS home-automation system with leak-detecting smart-shutoff valves, a sprinkler-control system, a garage-door controller, a voice-command interface along with smart-grid compatibility. This latest feature can allow for integration with off-peak tariffs or load-shedding practices that the grid may use.

Things were relatively quiet when it came to the “smart-lock” devices with two such devices being premiered as credible products. One of these was the Okidokeys smart-lock retrofit kit that adds NFC smartphone, touch-card and key-fob functionality to an existing tubular deadbolt. This kit has been based on Openways smartphone-enabled hotel room locks and has been pitched as a “wide-reaching” device while maintaining the user’s existing key as an entry path. Another deadbolt offered by Goji implements an integrated outside display, an integrated camera and implements Bluetooth and Wi-Fi technology.

ADT who are well-known for service-based monitored security have joined in to the connected-home scene while keeping their service-driven business model alive. They have fielded the Pulse home security package which adds voice commands via a smartphone app along with the Canopy smartphone app which offers protection on the go. They also offered extra hardware in the form of remote controls for garage door openers and ceiling fans, along with a touchscreen controller for their alarm systems.

They are still underscoring the serviced-security model even by extending this to your computer and home network by partnering with McAfee Security (now Intel Security) for a home data-security solution. As well, they are working with Ford to provide dashboard integration for your monitored-security solution using the Sync technology that Ford offers.

Technology on the open road

This year, the Consumer Electronics Show has also been been a chance for vehicle builders to show the latest online technology for their vehicles.

Google and Apple have made steps to integrate their mobile operating systems in to motor vehicles and are partnering with vehicle builders to further this integration. For example, Google partnered with Audi to build an Android-driven infotainment system for the car and underscored this with a 10.1” Android tablet that docks in to the centre console of various new-issue Audis to become a display and control surface in that vehicle.This is while Apple had support from Mercedes-Benz, BMW, General Motors and Honda for iOS integration.

GM are underscoring this with some Chevrolet vehicles being equipped with 4G LTE mobile broadband as well as the creation of the OnStar AppShop where you can add extra functionality through apps. They even offered a telemetry recorder app for use with the Corvette Stingray.

Even the chipmakers are cashing in on the connected car with Qualcomm pitching the 602a connected-car CPU while NVIDIA offered a variant of their Tegra K1 for automotive use.

Advanced vehicle techologies were being pitches at this show such as Toyota presenting a concept vehicle that is powered by a fuel cell. As well, Ford integrated a solar panel in to the roof of their C-Max Energi Concept electric car which allows the vehicle to charge itself from that panel to add extra driving range. BMW even put up the idea of a parallel-parking “auto-pilot” for their i3 electric car where you can press a button to start your vehicle parking itself in that shopping-centre car park.

The aftermarket car infotainment scene is still kicking along with Alpine offering the X009 9” navigation receiver that fits in the dashboard of trucks and 4WDs and interlinks with smartphones including having MHL support for the Android phone. JVC also is supplying a double-DIN car stereo with MHL connectivity, touchscreen while app-link functionality and Siri Eyes Free is also appearing on cheaper JVC head units. Pioneer are even offering car AV equipment that “doesn’t miss your smartphone” by offering various methods of connectivity such as AVICSync, MirrorLink and AppRadio.

Sony has also gone about this in a different way. Here, they have a double-DIN CD receiver which works as a smartphone dock. Here, your Android smartphone can be set up with NFC paring and, with a companion app, becomes the control surface for the car stereo.

What I see of the Consumer Electronics Show this year is a strong foothold for connected wearable devices, increased presence by vehicle builders at the show, a blending of computer classes that aren’t really delineated by operating system or display size along with a make or break for 4K ultra-high-definition TV.