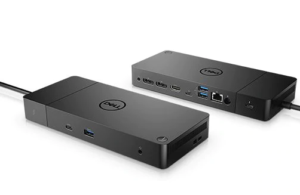 Dell has defined a series of business USB-C docks that can have their host connectivity technology upgraded or replaced by the user.

What are these docks about?

This series of expansion modules, known as the Dell WD19 family have in common video connections in the form of a single HDMI, two DisplayPorts and a USB-C with DisplayPort alt mode connectivity. The above-mentioned USB-C DisplayPort-enabled port, along with another USB-C port located up front offer data transfer and Power Delivery power-source functionality. There are three USB 3.1 Type-A sockets with one up-front along with a Gigabit Ethernet network-adaptor function. As well, there is a basic USB sound module that has a headphone/microphone socket up front and a line-out socket behind, which may suit the use of a wired headset, powered speakers or that old stereo amplifier connected to those old speakers you use for computer sound.

The devices are pitched for business use, especially with large businesses who practice hot-desking a lot, using shared workspace setups where you connect a laptop computer to at least one large screen as well as a full-size keyboard, full-size  mouse and Ethernet network connection.  This leads to separate modules being available for USB-C connectivity, Thunderbolt 3 connectivity and dual-USB-C connectivity depending on the performance needs of the workspace’s user group.

The power available on these units is up to 90 watts for equipment adhering to the current USB Power Delivery specification. But Dell takes this further to 130W for their own products because this specification currently doesn’t address the likes of the XPS 17 which demand more power output. This may be something that will be investigated by the USB Implementers Forum for supporting USB Power Delivery on higher-powered devices namely powerful large-screen laptops or “next-unit-of-computing” desktops.

For that matter, the Thunderbolt 3 variant has another USB-C port that supports Power Delivery, USB-C and Thunderbolt 3 data transfer and DisplayPort alt mode.

If you are buying the docks, you can choose between the different units offering the different host connectivity types and pay appropriately for the connection type. But Dell sells these modules as a separate accessory so you can upgrade your dock to a better host-connectivity type like Thunderbolt 3.

Although this is optimised to work primarily with Dell computers, the WD19 series of docks can work with any computer that has a USB-C or Thunderbolt 3 connection. This is in a totally “plug-and-play” manner without the need to install device drivers.

But it could allow Dell to have a range of business-class docks ready for full-on USB4,  Thunderbolt 4 or any future host-peripheral connection technology. This is with the ability for users to upgrade them to that technology when the time comes.

As well, having the dock part as a separate module can allow Dell to build on this system further. For example, it could also be about creation of a multimedia variant of this dock with a better sound module having line inputs or SPDIF connectivity along with more USB connections. Similarly, there could be a dock with multiple-Gigabit Ethernet connectivity that could appeal to “workstation-class” network computing.

Limitations that are identified

From all of the material I have seen on the Internet about these devices. there are some limitations that show up here.

For example, for the single-USB-C or Thunderbolt-3 connection modules, Dell could fit each module with a USB-C socket for the upstream (host-side) connection rather than using a captive USB-C cable. This could allow the user to use longer USB-C cables thus allowing for installation flexibility. It can also allow the user to replace a broken cable themselves, something that will become real if they frequently plug and unplug their laptop from the dock.

From a video review that I had seen, there could be the ability to support Thunderbolt-level multiple-screen display for three outputs for the Thunderbolt 3 variant. This could work better with the Apple Macintosh platform, but “open-platform” implementations like Windows don’t need to worry about this issue much. But it may not work properly with the modular approach behind this dock’s design.

But the Dell WD19 business USB-C dock family underscores the reality that you have to pay dearly for something that is robust and will last you in to the long term. It can also show that a design platform can be achieved for premium, business and multimedia docks where there is a goal to see them last longer and be future-proof.

Normally I would have a product for a few weeks to be able to test-drive it, but I had a very short opportunity to try out a Cyrus Lyric network-enabled CD receiver at Carlton Audio Visual. The demo unit was intended to be shifted to this hi-fi dealer’s stand at the HIA Home Show. I have given space to this product as another example of its class since it was premiered at the Melbourne Audio & AV Show 2013 at Intercontinental Melbourne The Rialto .

Carlton Audio Visual is one of a few remaining specialist hi-fi and home-AV dealers existing in Melbourne and who maintain a “bricks-and-mortar” storefront where you can actually try out the equipment you want to purchase or specify.

The functionality I was able to try out with this unit was the CD-playback functionality and the ability to “pair up” and play music from my smartphone and the unit was connected to a pair of Monitor Audio floor-standing speakers which demonstrated how flexible this class of network-enabled CD receiver was. I played the Big Break Records CD-remaster of Delegation’s “Eau De Vie” through this system and found that it came across with that same “punch” that was important for popular music, especially funk, soul and similar music. 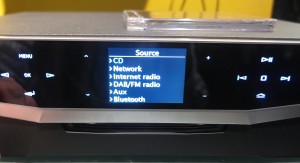 The many functions that the Cyrus Lyric has

As well, I had done some other research and found that the Lyric does well for connectivity with 2 optical and 2 coaxial digital (PCM) inputs for equipment like a TV or set-top box with digital output, or a MiniDisc deck. It can also work as a “virtual sound card” for your laptop computer using a USB Type-B connector, but you also have a line-level analog input and an analog output that can be configured to be a line-level output for a recording device or amplifier, or a pre-level output for a power amplifier or active speakers like the Bang & Olufsen Beolab or Bose Powered Acoustimass speakers.

There is even the ability to have a Cyrus Lyric set up for “2.1” operation with an active subwoofer and while its own amplifier drives a set of speakers that don’t rate well for bass like very small bookshelf speakers or smaller “cube-style” speakers. This means that you can adjust bass volume and cutoff frequency for this setup at the CD receiver’s control panel.

There are some useability improvements that could be provided here. For example, when the Lyric is actually in operation but you want the system not to light up fully, it could “light up” the volume control “buttons” and a “menu/source button” all the time so one can know where to go if you needed to adjust the volume quickly such as to turn the music down when you want to speak with someone or “wind up the wick” for a favourite song.  It is symptomatic of a trend in designing consumer and small-business electronics where you have a dark-coloured control or display panel which lights up items on an “as-required” basis as has been done with pinball machines.

From my experience with the Cyrus Lyric, I do see some good things coming of it being Cyrus Audio’s example for a high-quality network-connected CD receiver expected to last a very long time. I would recommend someone to purchase the Lyric 05 low-powered model along with a pair of smaller bookshelf speakers or for that small apartment if they had their eye on this model. This may also apply with people teaming one of these units with a pair of older speakers that were in good condition. The Lyric 09 would come in to its own with newer speakers that could handle its greater power output.