Ozmo’s WiFi PAN available Q4, is this the end of Bluetooth’s reign of terror? – Engadget

Related Articles in this site

The Wi-Fi Personal Area Network is getting closer

My comments and questions

Previously I have covered the topic of WiFi technology being used as a “personal area network” for a computer, which comprises of peripheral devices like mice and keyboards communicating to a particular computer via the WiFi technology. rather than that technology being used to transfer data between computers and other devices in a local area network. What has happened is that Ozmo have come up with a real chipset for use in these devices that can use this medium as well as run for a  long time on batteries. At the same time, Ozmo had built reference designs of wireless mice and keyboards that use this technology to communicate with their host devices.

One main question that I have about Ozmo’s effort is whether the same technology can be applied to devices that link directly to a Wi-Fi local area network’s access point rather than a particular computer? One main application that I see here with this technology would be Wi-Fi as a sensor / control network medium with devices like those that Ekahau had made as part of their Wi-Fi-driven real-time location technology, such as the pager tag which I had talked about in this site previously. Another application would be Internet radios, Wi-Fi-connected speakers and similar multimedia terminals that would be able to work on batteries as well as digital cameras that can upload to network storage or Internet sites or present to DLNA terminals without a severe penalty on battery life.

Another issue would be for a dedicated-function device like a set-top box or games console to support this kind of technology, whether as part of integrated Wi-Fi LAN functionality or as a Wi-Fi PAN setup as an alternative to Bluetooth or infra-red as a way of connecting peripherals, especially control peripherals.

It would be very interesting to see what comes of this technology once the silicon becomes fully available.

I have been talking by e-mail to Mika Kouhia from Ekahau about the use of their WiFi-based real-time location technology in the typical home or small-business network. The applications that may come to mind here will typically cover an emergency-response / nurse-call system that is an integral part of the at-home care of elderly, infirm or convalescing people; or small businesses, especially those who are partners to large business, who need to track assets in a similar manner to what is done by large organisations.

The main complication that limits this technology is the fact that most of the wireless networks deployed in this space only have one access point, typically the one that is integrated in to a wireless router. You may be lucky to use this technology on a wireless network that has an extra access point such as a wireless router that is repurposed as an extension access point and connected to the main router via a HomePlug powerline link or one of those access points that work with a HomePlug powerline backbone.  On the other hand, you would have to deploy “infrared beacons” around the premises and rely on the Wi-Fi wireless link provided by the router as primarily a communications link.

The infrared beacons work on a similar infrared frequency to the remote controls used to control the majority of TV sets and other consumer-electronics devices in circulation. Thus they won’t interfere with the passive-infrared sensors used in most security systems or automatic “sensor-light” setups because these sensors are tuned to an infrared frequency emitted as part of body heat.

The primary reason for implementing the technology in the home 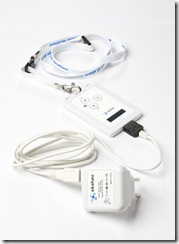 The primary implementation that I was talking about with Mika was to use their T301BD Wi-Fi Pager Tag which hangs around the neck of a person. This tag has an integrated display and two function buttons that also work as emergency-call buttons. As well, if the tag is pulled on the neckstrap, it can initiate an emergency response. The tag supports direct paging with push-button response, which can allow it to work with a “response-check” setup where if the user doesn’t respond within a certain time to a call, the system initiates emergency action. The display could come in handy by showing the person’s name, which would be a good help with people who have memory-loss disorders.

In this implementation, there may be the need to establish Internet access to the pager tag in order to permit this device to work as part of a solution provided by an external service provider. This may involve use of hardware or software on the network that provides at least dynamic DNS functionality and integration with UPnP IGD-enabled routers to provide access to the tag. The functionality could be extended to provide local nurse-call functionality with in-house location display through a local screen and / or Web page available through the home network.

Similarly, the pager tag could work with other technology to assist people who have memory-loss disorders by enabling the use of electronically-generated “reminder screens” for particular tasks. This is relevant to an article that I wrote about in my blog concerning technology that is to assist the elderly in their daily lives. Here, I had talked about a kitchen equipped with various technologies like pico-projection systems, RFID and Wii-style motion sensors to provide reminders through different food-preparation tasks.

How this could be taken further

Ekahau should then consider studying this application as a technology that suits the current home-driven health-care direction.

Here, we are dealing with an older population as people of the baby boom move in to the later years of life and more people live longer. As well, there is more emphasis on home-based health-care so as to provide patients with the dignity of being looked after in their own home environment. This also includes an emphasis on independent living for elderly people, including having younger relatives be part of the older person’s life in a support role.

Similarly, there are disabled or chronically-ill people who want to be in the familiarity of their own home and family and these people can be able to work as carers, whether alone or alongside paid staff members who work on a rostered system.

The supporting software could be integrated in to computing devices that work on any of the common desktop-computing, handheld-computing, set-top box or embedded-device platforms in order to establish an assistive-technology ecosystem in the home.

My comments on this issue

The Ekahau press release that is linked to from this article details the use of a WiFi-based staff badge that can be used to locate particular staff members in the hospital’s psychiatric ward and deliver messages to them.  But the feature that drew me to this device was the remote panic-alarm functionality that sends its signal via the hospital’s WiFi network.

Any panic-alarm or medical-alert system that is deployed in the home typically requires a transmitter and receiver working on a dedicated frequency, in a similar manner to garage-door openers.  If they are monitored by an external agency, the devices then transmit their alert signal to the monitoring station via a dedicated telephone or cellular circuit.

Now there is a different reality being brought about with cost-effective Internet service provided to WiFi-based wireless home networks in many households. This has included the concept of providing telephone and multi-channel television service through the same pipe, all thanks to the magic of IP-based packet networks. The classic circuit-based signalling methods used by these alarm devices are becoming less relevant in the packet-based signalling. Similarly, most users will want to benefit from the infrastructure that is laid down in a home network, such as the establishment of a multi-access-point WiFi network with a HomePlug-based backbone to cover a difficult house.

The Ekahau setup could be scaled back to allow an alarm installer or broadband Internet provider to sell a similar system in to the home. Any moveable sensor like a medical-alert pendant could make use of the existing WiFi network for transferring its data to the monitoring facility. It could then lead to e-mail and / or text (SMS) messaging if the device is triggered. Similarly, the unit could be used to deal with “wandering” behaviour that can be part of dementia-related illnesses by alerting if the person goes out of range of the WiFi network. As well, such systems could support local monitoring through the use of a local server device, thus providing their output through a Web page, platform-specific “widget” or desktop application.

This setup may appeal to broadband providers who want to gain more “average revenue per unit” by reselling basic security services as part of their package. It could also be a way of achieving a legitimate upgrade path for currently-deployed building security systems, especially in the context of the “switched-on” Internet-enabled home.