Wi-Fi Gets Even Better | Wi-Fi Planet

Wi-fi to get a whole lot better | BBC News – Technology

A while ago, I had mentioned in my blog about Intel and Ozmo designing chipsets that support a Wi-Fi (802.11a/b/g/n) personal area network. As well, Microsoft had built support for this kind of activity in to Windows 7 so the operating system can manage these networks if the computer’s chipset has inherent support for this. Now, the Wi-Fi Alliance are defining the “Wi-Fi Direct” standard that allows the establishment of these personal-area networks. They have also said that the “Wi-Fi Direct” personal-area network can be catered for on some existing equipment through the use of a driver or firmware update downloaded from the manufacturer’s site. 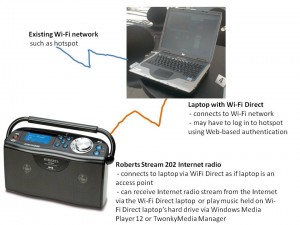 A Wi-Fi personal-area network is based around a computer, typically a laptop general-purpose computer, providing a single low-power Wi-Fi service set for a small number of devices while being able to link with an existing Wi-Fi service set using the same Wi-Fi networking chipset. The computer is essentially acting as though it is a wireless router with a Wi-Fi backhaul.

One main near-term benefit of operating a Wi-Fi personal-area network is to use a Wi-Fi-enabled device that doesn’t have the full screen, keyboard and Web browser, like a digital camera or Internet radio at most wireless hotspots which typically require you to establish your session through a Web page. Similarly, you can do network-based activities like transfer files, make your music library available to your DLNA-capable media equipment or engage in multi-player multi-machine gaming while using a public Wi-Fi network like a wireless hotspot.

The main benefit of this method beyond using the classic “Ad-hoc” mode that is part of the 802.11a/b/g/n standards. The “ad-hoc” setup often provided poor security and was very unstable, especially if it was being used to transfer large amounts of data like files between colleagues’ laptop computers.

This technology has also been designed to suit all classes of network deployment, ranging from home and small-business networks to large corporation and government networks. The needs of a large corporation or government department with sensitive intellectual assets have been taken care of including the ability for the access points in these networks to detect Wi-Fi Direct networks and, where policy dictates, to shut down these networks. There is only one security fear that I have in that the technology could be used to create an “evil-twin” rogue access point at a wireless hotspot. The way I would mitigate this problem would be to limit the power of a Wi-Fi Direct network and give hotspots the ability to detect these networks. Further still, I would support the use of SSL-style verification mechanisms being part of the SSID beacons in enterprise and hotspot networks as mentioned in my article on keeping the WiFi public hotspot industry safe.

Some of the computing press see the technology as a competitor to Bluetooth especially when it comes to linking devices with general-purpose computers. This is although Bluetooth have established small-size low-power chipsets for integration into peripheral devices like headsets and mice. It may also be seen as a chance for companies to work on low-power small-size Wi-Fi radio chips for use in these kind of devices, which can also benefit devices that deal with Wi-Fi on a LAN perspective like Internet-enabled consumer electronics.

Also, if the pundits see that this technology is going to work for human-interface devices (keyboards, mice, remote controls, game controllers, etc) and similar applications, they need to have this concept developed and proven across an IP subnet. This is because Wi-Fi is simply being used as one of many physical network media for IP networks; and there haven’t been any device classes and application-layer protocols established for human-interface devices, sensors and similar applications to operate across these networks.

Once this technology is worked out properly, I would see Wi-Fi Direct being an enabler for network activities involving Internet-based consumer electronics or working alongside a colleague rather than being another wireless medium for keyboards and mice.