I previously reviewed the Brother HL-4150CDN high-speed single-pass desktop colour laser printer and have been looking to review colour laser printers with a similar feature set (Ethernet networking, high-speed colour printing, auto-duplex printing) to this model that I reviewed. The first competing model that came along with this basic function set is the HP LaserJet Pro 400 which I am now reviewing. It is known as the M451dn but is also available as the M451dw which has integrated 802.11g/n Wi-Fi wireless connectivity.

It is equipped with the HP ePrint email-to-print function, yet is able to, like other printers in this class, turn out colour print jobs as fast as monochrome print jobs for this class of printer.

Of course it is also very interesting about the way HP are positioning this printer in a very confusing purchase environment as they are promoting their high-end “OfficeJet Pro” business inkjet printers like the OfficeJet Pro 8600 Series as being as cost-effective, if not cheaper, to run as a colour laser printer. This in fact affects how they position and price the LaserJet printers and the consumables available for them. 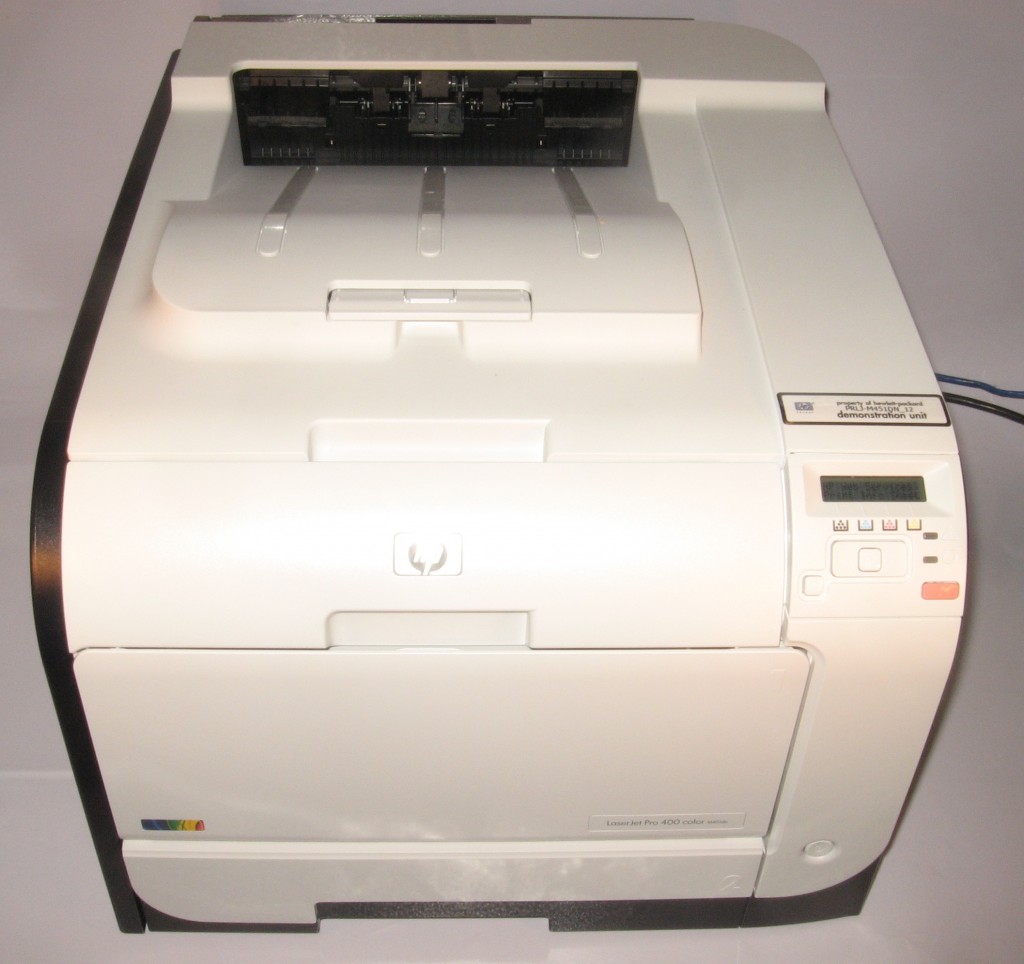 The HP LaserJet Pro 400 Series printer is the first single-pass high-speed colour laser that I have reviewed here that uses the Integrated toner-drum print cartridges rather than a separately-replaceable drum unit. There may be benefits and caveats to this approach such as running costs or design abilities for this class of printer.

Like most of the these colour laser printers, this printer uses a drawer for loading and unloading the colour print cartridges. This makes them easier to replace and the process isn’t very messy as well as avoiding the use of “clamshell” designs with lids that can be hard to open.

The network connectivity works properly for all Ethernet-based wired networks and you could even have it plugged in to a HomePlug powerline network adaptor at the end of one of these networks for a reliable no-new-wires network setup. As well, it is a future-proof network printer with integrated dual–stack support for IPv6. 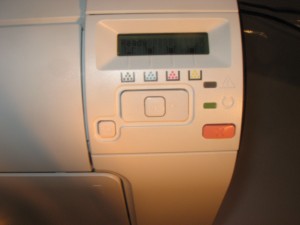 This printer has the ePrint email-to-print functionality which I have given plenty of space to but you need to instantiate and manage this function from a regular computer on the network. It could benefit from having on-off or “reset” functionality managed from the printer’s control-panel menu like on the HP LaserJet Pro M1536.

As well, it can work properly with the HP ePrint Home & Biz mobile app for the mobile platforms as well as having inherent support for Apple’s AirPrint iOS mobile-printing effort.

This printer has a “quick-form” printout functionality so you can print out graph paper, notepaper, music staves and similar ruled paper from the machine’s control panel. It still has the same options that have been available across all HP printers equipped with this feature.

The printer uses the same “Smart Install” feature that the HP LaserJet P1560 and the LaserJet M1212 that I previously reviewed here use. This has the driver held in the printer’s firmware and you install the driver to your computer by pointing to the printer’s Web page or to a virtual drive letter and downloading the software from there. This kind of setup can be augmented through the printer checking for and downloading the latest driver software from HP’s Website at regular intervals so that subsequent users have the latest driver software.

The driver software is still easy to use, using the same “preset” methods as had often been the case with other HP driver programs. Even the printing options for duplex or booklet printing are highlighted with a graphic of how the finished document will come out when printed and how you bind it. 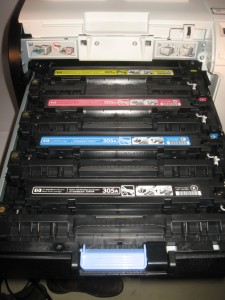 The print speed for the HP LaserJet Pro 400 Series printer is the same high speed for colour jobs as it is for monochrome jobs using the same paper.

The auto-duplex function could be more efficient with any multi-page or multi-copy jobs. It doesn’t match the Brother HL-4150CDN on this aspect where the Brother could effectively process two sides of two sheets at once.

As well, this LaserJet printer also exhibits a registration problem on the page’s vertical axis where the back of the page is printed significantly higher than the front. It may be limited to this demonstration sample but can be of concern with some desktop-publishing tasks where the back of the document has to line up with the front, such as “cut-out” or “odd-shape” projects like tags and door-hangers. But it wouldn’t be of importance when you turn out booklets or regular documents because of the various margins allowed in the layouts.

I have performed a 100-page auto-duplex print run using regular paper and this printer has been able to complete the job reliably which means that it could satisfy heavier tasks more easily.

When it came to printing photos through this laser printer using regular office paper, I was expecting a dark image with poor contrast. But I had seen the HP LaserJet Pro 400 Series turn out images that have the same contrast as a good-quality business inkjet when given plain paper. It tended to be heavier with the green on an image that used a contrasting pale-green and bright-red features while it didn’t run a dominant pink overcast image on a group shot of people. This would appeal to those of us who are turning out quick proofs of photographic material.

The printer could use high-capacity flash memory, preferably the SDHC cards, for holding job queues, especially if it is  expected to be a business workhorse. As well, a feature that a lot of competing dedicated colour laser printers do offer is a USB socket for “walk-up” printing from USB memory keys or digital cameras.

But, as I have explained previously, I would definitely like to see improvements with the automatic duplexer especially in its throughput and its front-back vertical-registration behaviour.

Similarly, I would like to see a menu option available from the printer’s control panel that allows you to turn the ePrint feature on an off from that particular control surface. This would allow you to stop the ePrint service overnight when you close up your premises or suspend use if it if you find that it could be misused. It could also benefit from a “confidential print” option where you have to enter a code at the printer to print out the job.

If you value ePrint email-to-print, prefer an integrated-print-cartridge laser-printer design and have moderate workload expectations, I would recommend you purchase this unit and run it with the high-capacity black print cartridges. Otherwise, I would go for the Brother HL-4150CDN if you are valuing a cost-effective heavy-duty printing machine that excels on double-sided printing throughput.