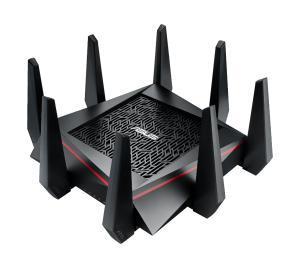 A feature that is appearing at the top-end of manufacturers’ wireless router and access-point lineups, but will trickle down to more modest offerings including ISP-offered equipment is MU-MIMO (Multi-User Multiple Input Multiple Output).

This answers a situation faced with home, business and public Wi-Fi networks where individual users’ bandwidth is reduced because there are more Wi-Fi client devices using these segments.

It effectively provides an effective total throughput improvement where there is at least one MU-MIMO Wi-Fi client device on the wireless network. The trick used here is to use “beamforming”, which is effectively steering radio waves between radio endpoints, to achieve simultaneous AP-client data transfer for up to three client devices.

It is effectively like what an Ethernet switch does for an Ethernet network where it allocates the maximum bandwidth to the network client rather than sharing that bandwidth amongst a group of devices.

Previously, if you had a three-stream access point or router with 3 antennas, a third of the total bandwidth would be offered to the single-stream devices. These devices would also limit the bandwidth offered by the access point for that Wi-Fi segment and share that amongst the other devices. But a MU-MIMO setup would send the needed bandwidth to each device simultaneously, creating a “fat Wi-Fi pipe” for each device.

It also answers a reality where a Wi-Fi network would be serving plenty of legacy devices based on 802.11a/b/g/n or 802.11ac SU-MIMO technology along with the newer MU-MIMO devices. Here, the remaining Wi-Fi bandwidth would be freed up for the legacy devices to share while each MU-MIMO device has its own bandwidth.

But to see some real throughput benefit from a MU-MIMO 802.11ac Wi-Fi wireless network segment, you would need to be using an 802.11ac MU-MIMO client device on that segment. This would appear as devices are upgraded to newer models that have this feature.

A good question to raise with MU-MIMO would be whether clients and access points still benefit from multiple-access-point setups that are used to increase coverage and whether these setups also increase network capacity.

Other than that, it is the sign of things to come for the Wi-Fi wireless-network segment where they will benefit from increased throughput.