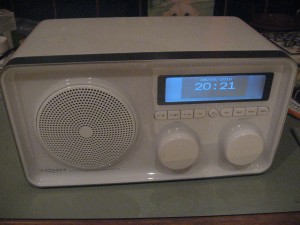 I am reviewing another of the Internet radios that are in that “mantel-radio” form factor like the Kogan Internet radio that I previously reviewed. From what I have noticed, it was as though it was the Kogan radio but without an iPod dock and in a glossy white cabinet.

The set is connected to mains power via a mains cord that is attached to the set rather than the usual AC adaptor that plugs in to the set. This is more in line with the traditional mantel radio or most of the clock radios that are currently ins use and will be likely to benefit people who have to deal with crowded power outlets and powerboards,

The set uses a bitmap LCD display which yields a large clock display whenever it is turned off and provides a useable menu display. The knobs are of an equal shape and all the buttons are lined up under the display in a single row. This may impair useability for older people because the labelling is too small.

On the other hand, the volume control is a real analogue volume control rather than the rotary encoder that I have used on most Internet radios and other recent consumer electronics. This will appeal more to mature people who want greater control of the set’s output volume – I have even heard that a sign of a person’s maturity is knowing that the volume control can be turned down rather than always up!!!! 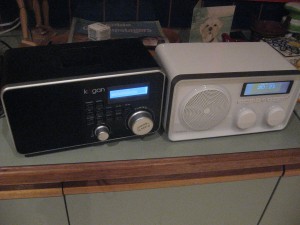 Kogan and OXX Internet radios alongside each other

Like the Kogan table radio, there is an auxiliary input for external audio equipment like MP3 players and Discmans as well as a headphone jack which you can use as an external speaker jack when connected to active speakers.

It also excels on network connectivity through the provision of an Ethernet socket for use with wired networks, including HomePlug powerline networks. The wireless-network connectivity has been improved through support for WPS “push-push” setups as well as network profiles for multiple different wireless networks.

Lately, I had visited another location where this set was in use as a kitchen radio and was setting it up to work with a multiple-access-point wireless network and it shows each access point as a single entity even though the network was set up as an extended-service-set. This is still a problem with the Frontier chipset Internet radios because they are presumed to be kept in a single position rather than moved around the network. As well, the WPS “push-push” setup experience went very smoothly without a problem when I enrolled it with a router that was set up to work as an access point.

There are four preset buttons for each of the operating bands as well as support for integration with the “www.wifiradio-frontier.com” Internet-radio portal. This then allows for a larger list of preferred stations to be kept consistent across multiple sets.

The unit also has improvements in other areas like dead-programme “clean-up” with DAB multiplexes for sets that are moved between towns or whenever the multiplexes are rearranged. Similarly there is also an equaliser function with five tone presets and manual adjustment for bass and treble. There wasn’t a loudness-compensation control on the manual tone adjustment unlike other Frontier radios with similar firmware.

It does work well with DLNA media services, especially the TwonkyMedia Server that is part of the Western Digital MyBook World Edition network hard disk. At the moment, it only works as a media player that can be operated from its control surface. 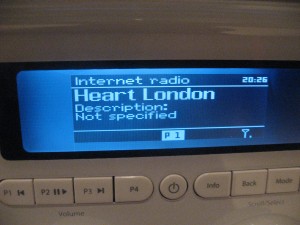 When this set is run at a loud volume, it sounds as loud as the Kogan set, which is loud enough to cut over noisy kitchen appliances for example.

One main limitation that I have experienced is the tendency to work on a small buffer which causes the radio to “start and stop” especially when playing some overseas Internet radio stations. It may be also limited through problems with Wi-Fi networks that may be difficult in some areas. The problem may also become worse as more people “hit on to” Internet radio – the new “short-wave” band, and servers don’t work well for quality of service. Other radios don’t seem to be as sensitive to this problem as much as this model.

A point of improvement that I would like to see would be steps to make the set more ergonomic and easier to use. For example, I would like to make the buttons more prominent so they are easier to find. This is more so for the on-off button and the mode button. As well, the LCD display could be better replaced with one of the monochrome OLED displays to improve on readability, or could be engineered to fill the display panel space more to make better use of that space.

Other than that, there wasn’t any other main limitation with this particular set for its class.

Although there is the limitation with the set working on a small buffer and being more prone to “start-stop” behaviour with Internet radio, it can work well as a tabletop radio / network media player for an office, waiting room, small shop or kitchen. I wouldn’t recommend this set for use in a workshop or similar location because of the glossy finish being more susceptible to damage that occurs in those areas.

I have added some further experience notes about the OXX Digital Classic DAB+ Internet radio since this review was published. This is due to my using a a radio of the same model that had been purchased by someone whose home network I was servicing and optimising.