“Start Me Up” video ad 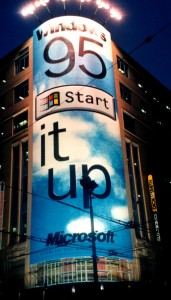 Start It Up campaign billboard for Windows 95

Windows 95 was an operating system that led to a revolution as far as PC-based computing was concerned and was treated as such when it was launched. It actually revised how one thought of the Microsoft DOS / Windows computing platform towards something that was on a par with other computing platforms.

One of the key features that was highlighted was to have the Windows GUI front-end and MS-DOS integrated in to one package. Firstly, you didn’t have to buy Windows as a program nor did you have to type WINDOWS to pull up the graphical user interface. As well, there wasn’t the need to run various menu utilities to provide a user-friendly operating interface where programs are easy to find and run.

Instead, you used Start Menu to find programs and Windows Explorer to know your way around the computer’s file system. There was even the ability to give files and folders a meaningful file name rather than a very short name that wasn’t meaningful at first glance.

Another key feature was to do away with the need to run extra software to add functionality to a computer. Previously, if you were to run a CD-ROM, network abilities or any type of added functionality, you had to run certain memory-resident programs and this became very awkward for most people.

This led to an operating system that was “ready for the Internet and the network” out of the box, thus opening up the possibility for small organisations and households to set up easy-to-administer networks for sharing files and printers, and gaining access to the Internet.

During mid-1995, the Intel-based “IBM-PC” desktop computing platform had been given a major improvement with the arrival of a new operating system from Microsoft. This operating system, initially known as “Chicago” and was to be known as “Windows 4” and “MS-DOS 7” but became known as Windows 95 had yielded many improvements to this platform that it was made increasingly legitimate as an “all-round” general-purpose computing platform that was ready for the Internet.

This operating system was launched with a huge campaign which revolved around the new “Start” button on the desktop and this was enforced with the use of the Rolling Stones smash-hit song “Start Me Up”. The visual element that was also used was the clouds in the sky symbolising a new operating environment for your computer.

How did Windows 95 improve the Intel-based “IBM PC platform”

This typically required users either to run a third-party menu program or graphical user-interface “shell” like Automenu, Microsoft Windows or one that was supplied with network software like Novell; or, if they had MS-DOS 4 or 5, start a DOSSHELL graphical user interface. IBM typically pushed their OS/2 graphical shell as one that was suitable for any of their PS/2 series computers.

Now, Windows 95 integrated the graphical user interface with the MS-DOS operating system and had this running as a default setup. It had led to avoiding the need to remember to run particular programs to use a graphical-user interface.

A lot less to run to add functionality to the computer.

Previously, if you wanted to run sound, advanced graphics or other multimedia, use peripherals like a mouse or a CD-ROM drive or use communications or computer networks, you had to make sure that you ran particular drivers or memory-resident programs. This typically required you to work with the CONFIG.SYS or AUTOEXEC.BAT files to make sure these programs start.

If you wanted to increase memory for particular programs, you had to know how to stop a particular memory-resident program to free up the memory space. In the case of communications, you had to use communications programs which were effectively “terminal emulators” to work with bulletin boards and these programs were the only ones that could control the modem. Similarly, if you ran a network, you would need to run networking software to allow the computer to benefit from the network. Some of these situations even required the location to have a resident “geek” called a system administrator to set up these computers. Even the Internet on a Windows machine behind a dialup modem needed the user to run programs like Trumpet Winsock to establish the connection.

This improvement alone allowed a small organisation to share files or printers between computers that are connected on a network with minimal configuration effort and has opened up the path towards the home network.

With Windows 95, most of these functions were simply handled by the operating system rather than by extra software that had to be started.  This had taken away all of the extra requirements that the user needed to think of to run a highly-capable computer and do what they wanted to do.

Ready for the Internet

1995 was the year that the Internet came to the mainstream. Cyber-cafes had sprung up around town and new businesses called “Internet Service Providers” came on the scene. It was considered the “in thing” to have an email address where you could receive Internet-based email and you also had to know how to surf the Web. The old order of bulletin boards and online services with their “controlled media” had fallen away for this new “uncontrolled media” order that the Internet offered.

Windows 95 was capable of working with the Internet “out of the box” whether through a network or a dial-up service. This was because the operating system had an integrated TCP/IP stack with support for PPP-based dial-up protocols. There was even a basic email client provided with the operating system.

This was a new take on the previous DOSSHELL programs, Windows Program Manager and the third-party menu programs as being a place to find and start programs. Here, the user clicked on the Start button at the bottom left of the screen and found a tree of program names which would represent to software found on their system.

It had been considered easier for most users to start working on whatever they wanted to work on and has become a standard motif for all of the Microsoft operating environments since this operating system.

Windows Explorer and the object-driven view

The file-management functionality was handed over to Windows Explorer which provided for a new way of managing files and objects. It allowed for programmatic views like a “My Computer” view that provided for a simplified shell or an “Explorer” view with a directory tree in a pane as well as an object-driven file view.

This collection-viewing concept had extended to the Control Panel and other operating-system components that used collections as they were introduced in to the Windows platform.

Previously in MS-DOS, you were limited to an 8-character file name with a 3-character extension that was used for defining the file type. Now, since Windows 95, you could create a meaningful file name of up to 32 characters long which allowed you then to identify your files more easily. Thee was a special truncated 8-character version of the file name for use with older programs that didn’t support the new file-name convention.

It became more important as digital cameras became popular because people could name their photos in a way that reflects the content of the picture and also was important as file-based audio storage came on to the scene.

Microsoft introduced the Registry configuration-data store as a way of avoiding the need to maintain multiple configuration files across the system. Here, this store allowed for a centralised point of reference for holding this data that the operating system and applications needed for configuration-reference information that had to be persistent across sessions.

Integration with the 32-bit computing world

This operating system was built from the ground up to be a true 32-bit operating system that was tuned to work with the 32-bit processors that emerged since the Intel 80386DX processor. This would then allow software developers to compile their programs to run their best in a 32-bit computing environment.

This was in contrast to programs like Microsoft Word 6.0 which were compiled for Intel-architecture 32-bit processors but in a manner that was to be compatible with 16-bit processors of the same architecture. As well, most of the MS-DOS operating systems were also compiled for use with the 8-bit “PC/XT” environments and/or the 16-bit “PC/AT” environments. The operating-system limitation then didn’t allow these programs to work at their best even if run on a computer with a 32-bit processor.

This had allowed for a variety of optimised computing setups like true multitasking and multithreading that these newer processors could cater for.

It is like Windows 7 where the operating system has been tuned for a 64-bit computing world and optimised for the newer multicore processors that are part of the Intel-based processor architecture.

Windows 95 had also catered for newer computing design principles such as the “soft-off” principle that was part of portable laptop computers and was to be part of the up-and-coming ATX desktop-computer design standard.  This principle catered for “one-touch” power-off and modem-based / network-based power-on practices which allowed for improved system management for example.

The operating system also allowed for support of various forms of extensability through use of standards, class drivers and similar practices that avoid the need to overload Windows with drivers.

Windows 95 wasn’t just an “ugly duckling” of an operating system but a major turning point for the evolution of the Windows platform. Happy Birthday Windows 95!