This radio that I am reviewing is the top-end network-enabled model of Pure’s popular Evoke series of DAB digital portable radios. All of the models have different functionality but a very similar style, with an oval-shaped accent encompassing the speaker and control area. The lower-end units have a wood cabinet and a plastic front panel which is varied according to the model.

This particular unit has a gloss-black finish with a large yellow OEL bit-map display and knobs for the volume and tuning controls. Other functions are operated using touch buttons that are lit up in yellow where applicable. This is intended to make the set look more classy, especially with the “piano-black” finish. 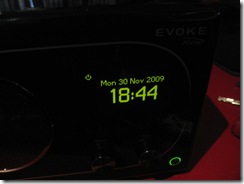 The OEL or “organic electroluminescent” display is based upon the displayed letters and segments needing the power to light up rather than the LCD display being dependent on a backlight to be easily visible. This is similar to what is used on my Nokia N85 phone reviewed in the blog and is very appropriate as a display method for devices that work on low power. I even refer to the OEL display as the “vacuum fluorescent display” for battery-operated devices because of the fact that the display yields the same brightness and contrast as the typical self-illuminating vacuum fluorescent display often used as a user-information display on VCRs, DVD players, home theatre receivers and similar equipment but doesn’t chew through the batteries to achieve that aim.

The Evoke Flow, like the rest of the Pure Evoke range of radios, is capable of operating as a two-piece stereo set when you purchase and use the optional matching external speaker. Similarly, this radio, like the rest of the Evoke range, can be used as a battery-powered portable radio when you buy a Pure rechargeable battery pack from the same retailer that you bought the set. These accessories haven’t come with my review sample, so I won’t be able to assess how it works with these accessories.

As well as its Internet-radio and network media player functionality, this set is also capable of receiving DAB+ digital radio and FM radio with RDS RadioText.

For connectivity, it also has a 3.5mm auxiliary input jack for playing music from an iPod or portable CD player and a 3.5mm line-out jack for use with external amplifiers or recording devices. There is also a 3.5mm headphone socket as well as the socket for the accessory stereo speaker. All these connections are located on the back of the set, in a similar manner to the Kogan and Revo Internet radios reviewed in this blog. I have always preferred these sets to have the headphone jack located on the front panel of the set, or at least on the side, to permit “walk-up” headphone use where you didn’t have to move the set to plug in a pair of headphones which are used on an ad-hoc basis. This is a practice I have often seen with most portable audio equipment I have seen and used through the 1970s and 1980s.

Pure do supply an iPod dock as an optional accessory for this radio but it doesn’t have a power input connector so the iPod can be run on external power while playing through the radio. Instead, I would use the Apple Universal Dock or an iPod dock with a USB, Apple Dock or DC socket so that I can connect an external power supply to the iPod or iPhone that is in the dock.

The set can connect to the home network and the Internet via a 802.11g WiFi network segment but this network can be secured to WEP, WPA-PSK or WPA2-Personal standards. This is the same for other Internet radios, which also means it can’t log in to a “corporate-standard” WPA(2)-Enterprise network or a wireless hotspot that uses Web-based authentication.

An improvement I would like to see on the setup when it comes to enrolling the set with a WiFi network would be to allow it to keep configuration details for multiple networks. This is more so because this radio is an easily-portable design and capable of working on batteries. thus could be taken between locations at a moment’s notice.

It can also stream audio from DLNA-compliant media servers like TwonkyMedia Manager or Windows Media Player (Windows Media Connect) or most NAS units.

The unit has the built-in Internet radio directory but benefits more if you associate it to the Pure Lounge portal. Here you benefit from facilities like persistent Internet radio presets and extra content. The Lounge service also provides background sound-effect loops like waves for situations where a sound-effect loop is needed. Such applications may include having the sound of waves to help you drift off to sleep or the sound of thunderstorms to help in getting a dog used to thunderclaps. This also includes a reference tone set representing the strings of a guitar for use when tuning your guitar.

When you use the Internet radio, you can browse a worldwide directory of all the stations registered with Pure’s Internet-radio directory or use a “form-based” search to narrow down the list. Here, when you touch the “Search” option, you see a form and select the attribute to filter the list by. This can be by “Genre”, “Country”, “Availability”, and “Bit Rate”. Then you press the Tuning knob to set the attribute’s value. After that, you touch the “Go” option to see your reduced selection. This is different to the Kogan and Revo radios where you went through a menu tree to select the Internet-radio station that you want.

Unlike the Kogan and Revo radios, there isn’t a row of preset buttons for allocating favourite stations. Instead, you select the “Favourite stations” which is marked with a heart symbol to go to your preset list and browse through the preset list and press the Tuning knob to play that station. When you listen to a station that you want to add to the list, you touch the “Add to Favourites” option to set it in your preset list.

The set can work as a DLNA music player but you can only play the content by using the set’s controls rather than over the network using software like TwonkyMedia Manager.

FM tuning is based on a “seek by default” method so that when you turn the knob, the radio finds the next strongest signal. The DAB function is based on selecting from a list of stations sorted by alphabetic order. There is a “trim station list” option for clearing up dead station entries, which is handy if you move the set between cities or the DAB multiplexes are being reorganised.

The set sounds more “soft and rich” compared to most small portable radios, including the Kogan and the Revo, but has a similar sound output level. Like the other Internet radios I have reviewed, there isn’t a tone control, whether as an easily accessible control or within the menus.

The OLED display is much more legible than the typical LCD display found on most Internet radios and is a bit too bright for night-time use. There is the option to dim the display or to have the display dark whenever the set is turned off. The clock display is large enough for easy reading across a room. Even if you dim the display, it is still legible, which can be a bonus if you have the set in your bedroom as a clock radio or have it in a hall or other room and still like the clock display to work as a “nightlight”.

The set’s fit and finish represent a high-quality product that is enjoyable to use. The knobs even have a feel associated with you operating a piece of quality equipment. The main limitation with the black gloss finish is that it could harbour fingermarks too easily and you may have to wipe those off frequently.

The telescopic aerial that you need to use for FM or DAB reception is much different from what I have seen in use on most portable radios that I have used. Here, this set, like a National Panasonic RX-C52 “ghetto blaster” that I have had once,  has a dedicated screw for anchoring the aerial. This will definitely make it easier the user to buy and fit a replacement aerial if this aerial is damaged, as is common with a lot of portable radios that I have seen and used. Good marks to Pure for realising what often happens with many portable radios and making the aerial easy to replace on their Evoke radios.

The Pure Evoke Flow isn’t a perfect portable digital / Internet radio and needs a few points of improvement for its product class. One would be for Pure to release a cheaper “junior model” in the “Evoke Flow” line that has a finish similar to the rest of the Evoke series and uses a two-line alphanumeric display rather than a bitmap display.

As far as connectivity is concerned, I would at least like to see the headphone socket located up front or on the side to allow “walk-up” headphone use. For battery use, there could be the possibility of the set working on any of the “regular battery sizes” i.e. AA, C or D through the use of an add-on battery module that takes these batteries, so that one can use these commonly-available “Duracell” or “Energizer” batteries with the radio.

The wireless-network connectivity could be improved through support for WPS “quick-setup” and / or the ability to work with multiple networks to suit its nature as a portable radio. The set could provide information that is necessary for enrolment to the “Lounge” portal on the display through a set-up option.

The set’s “piano-black” look will appeal to people who like a “classy look” for their Internet radio solution. This would typically encompass a lot of office users, especially professionals. It may also look the part with a home office or on a shelf in that classy kitchen. But it can definitely work very well as a “floater” portable Internet radio that can be taken around the house as required because of the light size and integrated handle. The fact that the handle doubles as a snooze bar may make the set appeal as a clock radio, although you have to descend through menus to set or enable the alarm clock, sleep timer or countdown timer.

The set’s display would be suitable for people with limited eyesight and the fact that you use knobs to adjust the volume and select stations may make the set appeal to mature and older users who are more comfortable with using knobs to select stations or adjust the sound.

The main limitation with this set is that it is significently expensive, usually around AUD$400-600 depending on the retailer.