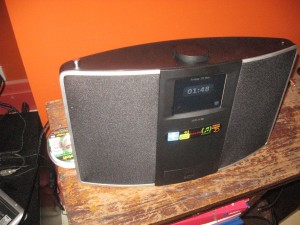 I am reviewing the Revo IKON, which is the first Internet radio that I have reviewed to be designed in a similar manner to a classic boombox. Here, it has been designed with that similar footprint in mind and also is equipped with stereo speakers that are angled outwards.

The unit actually has an oval shape and has a pop-out iPod dock on the front, under a colour LCD touchscreen which is the set’s main user interface. The volume knob and the power button are located on top of the set, although the volume knob is a rotary-encoder type which doesn’t show on the display what volume position you have set it to.

The colour LCD touchscreen is easy to read and the user interface that it presents to you when you select stations or other options is similar to an automatic teller machine that uses a touch-screen. The home menu shows a list of all the sources available – DAB, FM, Internet, LAST.FM, Media Player (UPnP AV), iPod dock and auxiliary input.

It also comes with a remote control which offers volume control, snooze / sleep control, transport control for the UPnP media player function or attached iPods, LAST.FM song voting as well as the ability to turn the unit on and off. You don’t have the ability to change stations or sources from this remote control.

The unit works with DLNA-compliant media servers but you have to use the touchscreen or remote control to navigate the DLNA media server. This is common with Internet radios because Frontier or Reciva, who make most of the firmware for these radios don’t support “three-box” operation using UPnP AV Control Points.

The set supports LAST.FM and can allow users to “scrobble” (expose listening habits to LAST.FM) content from LAST.FM content or from content from a UPnP AV / DLNA media server.

The set has a “clean-up function” that makes it easier to manage changes to the DAB station list, which can be of importance if it is taken between locations or the DAB multiplexes in a city are being re-arranged.

Speaking of the sound, the sound quality is very similar to most of the low-end to mid-range portable radios made through the late 1970s to early 1980s. It can also fill a small to medium-size room with sound in an intelligible manner.

The set can work with WiFi networks that use conventional WPA2-PSK passphrases or can be “bonded” to routers that support WPS “push-button” configuration. This function should be made available not as a WiFi network option but as part of the setup wizard. It can store the parameters relating to four different WiFi networks, which can be useful for home networks with more than one SSID or if you take the radio between multiple locations.

This radio also has an Ethernet socket which adds plenty of flexibility to how it is connected to the Internet. Here, you could connect it to a HomePlug or MoCA “existing-wires” segment using the appropriate bridge adaptor, a WiFi network that it can’t connect to using a WiFi-client bridge or directly to to an Ethernet network like in business premises.

There is only one external output socket in the form of an SPDIF optical socket for connection to a digital amplifier, home-theatre receiver or a digital recorder like a MiniDisc deck. This is limiting as far as outputs are concerned because a set like this could benefit from an analogue output like a headphone jack (to connect to headphones or external active speakers) or a line output jack (to connect to another amplifier or a cassette deck).

One main advantage with this set is the stereo sound provided by the two speaker systems built in to the unit. This is an advantage compared to the Internet radios that I have been reviewing in the blog so far. The other main advantage that this set has is the ability to work with an Ethernet network rather than just a WiFi wireless network, which opens up a world of flexibility.

Other features that I like include the colour display, improved DAB handling and support for stations that present logos as part of their Internet-radio streams.

One main limitation with the Internet radio function is the inability to access the preset-station list from all of the Internet-radio screens unlike what you can do with FM and DAB. This limitation could be rectified through a software update and impairs an otherwise very good Internet radio.

The other limitation with this set is the lack of a headphone jack or line-level output. This also limits the flexibility that the set could offer as far as connection to external audio equipment is concerned.

Other than the few limitations concerning output connectivity and ready access to Internet-radio presets, this radio does have a lot going for it as a general-purpose Internet table radio.

It would work well as a radio for a kitchen, office or small shop, especially if it is used as a direct replacement for an older boombox or iPod dock or as an upgrade from a single-speaker Internet radio like the Revo Domino or Kogan Internet radio.