I am now reviewing the Dell Studio 15 multimedia notebook computer, which is the first notebook computer to be reviewed in this blog. It is pitched as a portable multimedia computer, in an attempt to push in on the Apple MacBook’s territory as part of the recent general-purpose computing system showdown since Apple and Microsoft reworked their respective desktop operating systems last year.

It is worth knowing that if you buy a computer through Dell, you have a large range of options available to you in how you customise your unit. It ranges from processor types or memory and hard-disk capacities to optical drives, screens or batteries, through software even to how you want the computer to look. So it is worth knowing that the computer that you may specify may not be the same as the one that I have reviewed, and I have prepared a table at the end of the review outlining some variations including the unit I have reviewed. 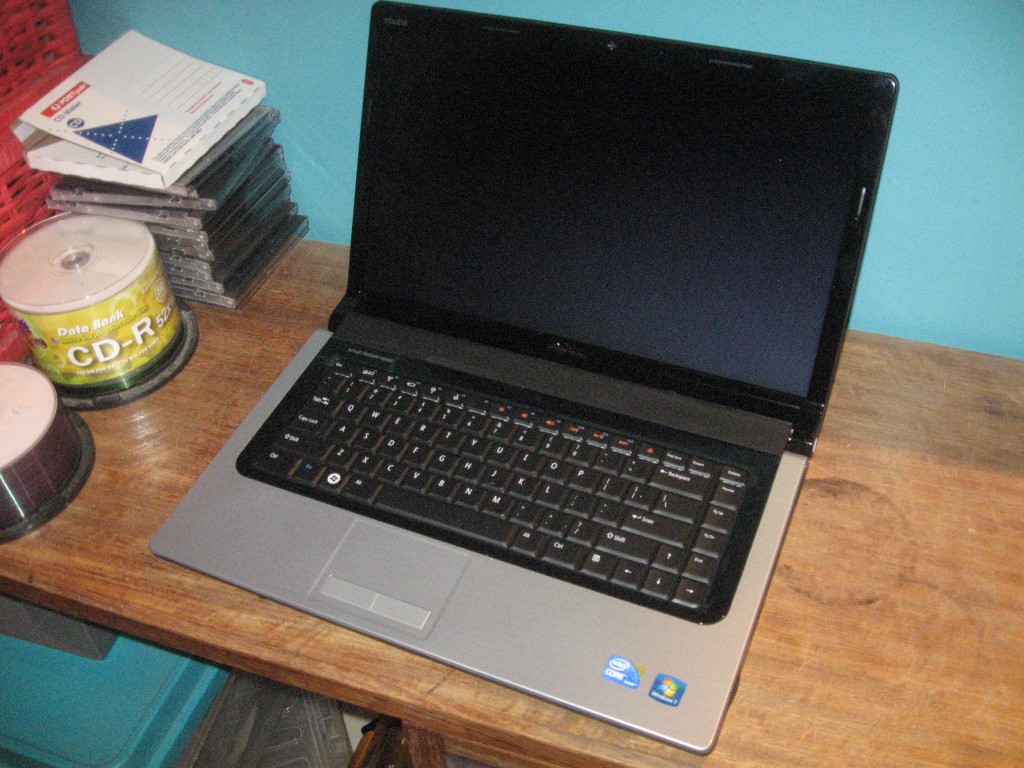 The unit has a glossy piano-black top which can be customised with different colours when you order it through Dell’s website/ The back of the computer is rounded when closed but has the hinges brought forward. On the right-hand side, the hinge pin acts as the system’s ON-OFF switch which will light up in white when it is on.

Like most of the recent laptop / notebook designs made by other manufacturers, Dell has moved away from using latches to keep the lid closed. This has made an accessibility improvement which is a boon for people who may have dexterity limitations.

Therefore, all the connections are located on each side of the keyboard, which has been a departure from the norm of laptop design. Similarly, there isn’t any latches that you need to operate to allow the lid to open, which can be a bonus with older people pr people with dexterity problems.

The computer is based around an Intel Core i5 multi-core chipset which is considered reasonable by today’s standards for a laptop computer. The review system also comes with 4Gb or RAM on board and works to a 64-bit architecture. The unit can be scaled up to 6Gb at $250 extra.

The Studio 15’s keyboard has a regular look, touch and feel, which goes against an Apple-inspired trend of using “chiclet” keys which look like a calculator keypad. This would appeal to those of us who are good at touch-typing. You can have this machine with a backlit keyboard as an extra-cost option, which may be of benefit for people who travel on night journeys.

An issue that may confuse users is the requirement to press “Fn” with the function key to gain access to their regular functionality, otherwise they become system control keys (display, WiFi, speaker volume, etc). This is infact becoming common as the the keyboard area becomes more cramped on these portable computers.

Another thing worth noticing was that you don’t have an ON-OFF switch on the keyboard area or other obvious areas unlike most other notebooks. Here, the switch is part of the unit’s lid hinge pin on the right hand side and is illuminated in white when the machine is in use. 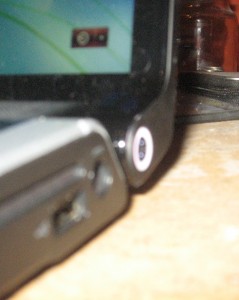 The unit uses a multi-touch trackpad which is highly-integrated with the palm rest below the keyboard. There are only two buttons below the trackpad for use as the equivalent of the mouse buttons. The design yields a dust-proof design which would lead to highly-reliable operation.

The display and graphics subsystem is based on ATI graphics techonology and shows up on an LED-backlit, LCD. You can use an external display that is connected via a VGA socket or an HDMI socket. If you use a DVI display, you would need to use a DVI-HDMI adaptor.

The LED-backlit LCD screen is typical of most LCD screens and there is no colour difference between this display and a regular CCFL display. The main benefit you may have is extended runtime when on the battery and a slimmer lid.

This unit has a 500Gb hard disk but can be ordered with a 640Gb hard disk at extra cost. What impressed me about this computer was that the whole hard disk was prepared as a single logical volume (drive letter) with space set aside for the operating system and supplied applications. 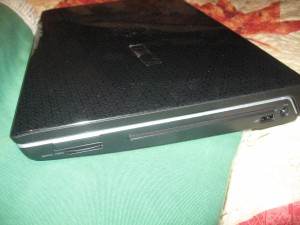 The review sample came with a slot-load BD-ROM / DVD-RW burner which can play Blu-Ray discs and burn to DVD discs. You will save around $200 if you opt for the same computer without the Blu-Ray option, which may be more of concern if you aren’t interested in “future-proofing” this notebook.

There is the feasibility for one to connect an eSATA-enabled external storage device to an eSATA / USB socket on the left hand side of the machine. As well, there is a built-in multi-format memory-card drive for use with digital-camera memory cards.

This computer is well-endowed when it comes to networking capabilities. It can work with 802.11n wireless networks that work on either the 2.4GHz or 5GHz bands and also has integrated Bluetooth wireless support. There is a Gigabit Ethernet port on the left-hand side for use with Ethernet (or HomePlug) )networks.

The sound comes through as being “full and clean”, otherwise it is typical for a laptop.  I had tested the sound by running a DVD of the “Live Aid” global fund-raiser concert that happened in July 1985. It is also worth knowing that the computer is available to order with a Creative-Labs sound chipset if you want that bit more out of the sound.

Sockets on left side including 1394 socket

The computer does well on connectivity by supplying 3 USB sockets with one being an eSATA socket, an IEEE1394 socket, video out via a VGA or HDMI socket, a Gigabit Ethernet socket as well as audio connectivity via a MIC/LINE-IN and two headphone/LINE-OUT sockets.,

This has certainly become a positive highlight for this machine, especially if it is being intended as a multimedia-focused unit.

I had done a “DVD rundown test” on the laptop to find out what the battery lifespan is like under difficult conditions like multimedia activities. This time, I played the aforementioned “Live Aid” DVD straight through and it completed the concert disc which lasted 2 hours, 17 minutes with the wireless-network functionality off. Also, I had run the computer on the default power scheme with the standard battery that came with it and had made sure the battery was charged up. The battery level was at less than 10 percent when measuered with the Windows battery meter when the disc had finished.

I have looked on the Dell Website and they only have a 9-cell extended range battery available either supplied with the system as part of your configuration or as an accessory you can purchase later. Sadly, Dell, like most other laptop vendors, doesn’t supply any DC adaptors which allow you to work with this laptop from a car battery or an airliner’s DC power-supply system. You may have to then look for such adaptors from third-party suppliers like Targus.

The machine doesn’t get hot very quickly and is not likely to burn your knees after a good run of use. This may be typical of most regular-sized mainstream business laptops.

I have created a table with some selected configuration options, especially concerning secondary storage and the price that is highlighted in bold represents the configuration that I am reviewing.

All of these specifications are delivered with Windows 7 Home Premium but I would prefer business owners to look at the Windows 7 Professional which will cost $60.50 extra. Windows 7 Ultimate, which is important if you have sensitive data on your system will cost you $140.80 extra.

I would recommend this machine as a future-proof “work-home” laptop, preferably for those who drive between locations. It would also find that it works well as a desktop replacement for business and multimedia use, rather than intense gaming.

It may also appeal to those of you who want to do multimedia work on a Windows-based portable machine, especially if you have are working with miniDV camcorders or other FireWire-equipped video equipment.