Do you really envy the HP Envy?

I am now reviewing the HP Envy 15, which I have talked about previously in relation to Windows 7, especially if you have noticed the AdSense ads for this computer that appeared on the blog around the time of that operating system’s launch. 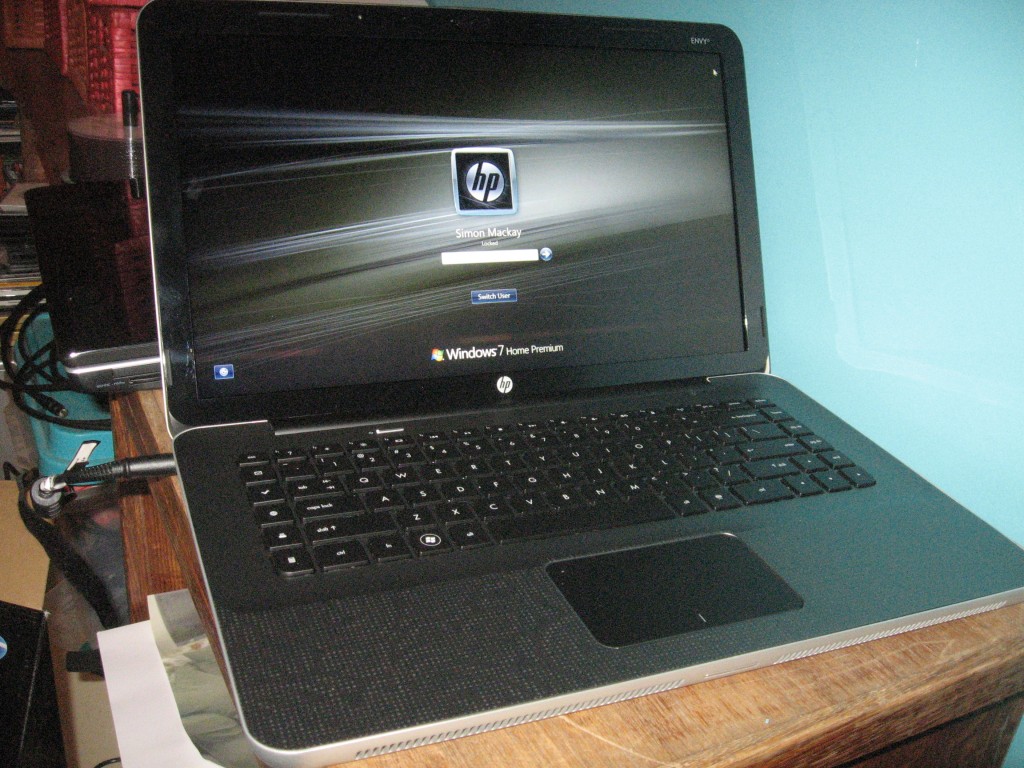 Even from the moment you unpack the Envy from its box, you will notice a look and feel that says the word “deluxe” about it. It was as though I was unwrapping something that was very special like a good watch. You would find the computer itself wrapped in a black cloth bag and the keyboard was covered with a black sheet. Even the cardboard box had the sense of “Black Label” about it.

The computer itself has a “bronze-tone” lid and keyboard escutcheon with a display that is shrouded with a black escutcheon. That same “bronze-tone” is very similar to how the Nokia 6210 mobile phone was finished. There is even a detailed pattern in the perforations on the lid an keyboard escutcheon that reminds me of a pattern associated with satin-finish or flock-finish wallpapers used by some people  to achieve the “manor house” look in their homes. The casing also has a feel that reminds me of aluminium even though it is plastic. 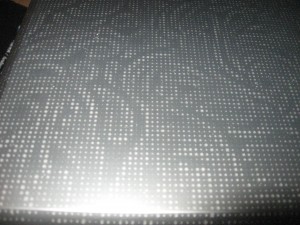 The keyboard has a “chiclet”-style layout which may not appeal to touch-typists and the keys don’t have a “deep throw” that most PC users are used to. Therefore, it will take some time getting used to. This may be an attempt to mimic the Apple MacBook Pro’s keyboard. You also will need to use the Fn key to gain access to the function keys, otherwise these keyare used for managing functions like sound volume, display brightness and media-player controls.

The trackpad looks just like the MacBook Pro’s trackpad, with the buttons being as though they are part of the trackpad rather than as separately distinct buttons. Here, you would use tne area on each side of a white marker on the bottom of the trackpad to select your options.

The computer works on an Intel Core i7 processor and is loaded with 8Mb RAM, which would allow for a high level of performance. This should be considered enough for the kind of performance expected from a deluxe machine.

The Envy has a 640Gb hard disk that is split between 3 partitions – a 580Gb boot partition that is used for programs and data, a 14.5Gb recovery partition and a 99 Mb HP TOOLS partition for HP’s own software.

For removeable storage, there is an integrated SDHC card reader on the front edge of the machine as well as an external tray-load DVD burner that is connected via the USB ports. The external DVD burner, which is finished in a similar manner to the Envy, also has an integrated 2-port USB hub.

The Envy has a 15” widescreen LED-backlit LCD driven by an ATI Mobility Radeon HD 5830 integrated-graphics subsystem. The memory used for this display is 1Gb of main system memory, which may affect system performance. This would be adequate for most tasks and had performed very well during the DVD run-down test with “Munich”.

The Envy also has “up-to-the-moment” connectivity abilities with 2 USB 3.0 sockets, ,1 eSATA socket, an HDMI video/audio output socket and a jack for connecting a microphone or headphones.,It doesn’t seem to work with the new 4-conductor plugs used as part of the OMTP specification for wired mobile headsets.

At the moment, HP has to supply operating software to “open up” the USB 3.0 functionality but Microsoft will rectify the problem by integrating this functionality when they release the next or subsequent service pack for Windows 7.

The Dr. Dre Beats Audio sound tuning primarily adds a 10-band graphic equaliser and balance control  to the sound controls, but the common lack of bass response is still there when you use the Envy’s integrated speakers – the small size and cramped space makes the job harder. 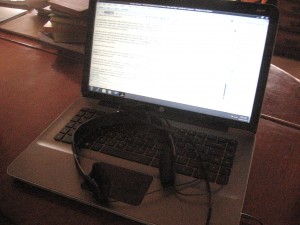 This sound tuning is best enjoyed with good sound equipment or a pair of good headphones in the order of AKG, Bang & Olufsen, Bose, or Sennheiser. Infact the sound comes through clearly with my B&O Form 2 headphones that I am using with this laptop and I would recommend these headphones as befitting the luxury style of this computer.

It may be worth noting that the Beats Audio tuning won’t affect the HDMI digital-audio output path mainly because the device that is used to reproduce the sound will be the control point for the sound output and usually offer better sound reproduction.

I had run a “DVD-rundown” test which measures battery runtime when the computer is playing a DVD. This test has the graphics subsystem constantly working as it shows the movie and als runs the DVD player constantly. Here, I was playing Stephen Spielberg’s “Munich” and had noticed that whether the wireless functionality was on or off, the computer couldn’t make it through the movie. This may also be because of a smaller battery pack built in to this computer and the fact that the DVD is played on an external DVD drive.

Sometimes the “throw-in” software that comes with a name-brand computer may be described as “crapware” can be of high calibre. One example is the MediaSmart Music Player, which behaves properly with UPnP MediaServer setups. Here, it allows you to navigate the MediaServer’s content tree in the same way as you would navigate it using a DLNA device’s user interface.

A major limitation with the Envy’s “thin-and-light” chassis design is that it is simply “cramped inside”. This limits proper cooling which leads to the machine becoming hot after a significant time of use. It also leads to the “Beats Audio” sound-reproduction tuning being off the mark because there isn’t enough room for the bass frequencies to resonate.

What HP could do to “build-out” the Envy deluxe notebook range is provide a larger “mainstream-style” notebook computer with integrated direct-load optical drive (preferably Blu-Ray) and larger battery in to the Envy series in order to set itself up with a worthy competitor to the Apple Macbook Pro computer. The suggested machine would have the same styling and Beats Audio sound-tuning as this machine and could support a larger screen.

I would place the Envy towards people who are wanting the look of one of the “thin and light” Apple MacBook Air computers but want to have something cheaper or stay on a “standards-based” computer operating environment.

Women may like this computer because of its emphasis on aesthetics, especially if they are enamoured by the “old-class” manor-house styling. The “thin-and-light” chassis may not fit in to a handbag but would fit well in a small briefcase or large shoulder bag.

Functionally, I would still class it as an all-rounder for most data-intensive applications. Some multimedia applications may require the computer to be on an external power source. The Beats Audio sound tuning would be justified when used with external sound equipment or good-quality headphones.

Laptop screen protectors and privacy screens–are they worth their salt?