I am reviewing the Sony CMT-MX750Ni Internet-enabled micro music system which is a small-form-factor CD/iPod stereo that can connect to the home network for Internet radio or DLNA-based music playback. It is equipped with a DAB+ digital-radio tuner but there is a version of this system known as the CMT-MX700Ni which doesn’t have this tuner and is available in areas that don’t have Eureka 147 DAB / DAB+  digital-radio services.

From henceforth, I am directing the comments in this review also at the Sony CMT-MX700Ni music system as well as this CMT-MX750Ni, except for any DAB digital-radio comments. 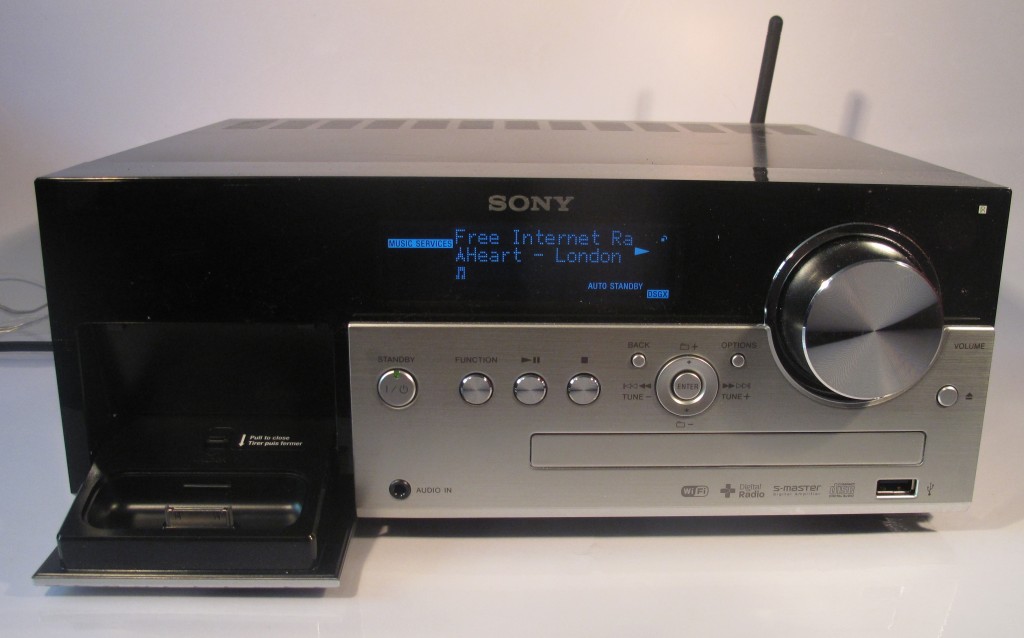 The CMT-MX750Ni can connect to a network either via Wi-Fi wireless or Ethernet. This allows for flexibility with wired and wireless network setups, such as working with highly-reliable Ethernet and HomePlug networks. You need to use the remote for setting up the music system on a Wi-Fi network that doesn’t use WPS push-button setup. Here, you use the numeric keypad on the remote to enter the WEP or WPA passphrase for your wireless-network segment in an SMS-style manner.

Sony has “reinvented the wheel” when determining how the speakers should be connected to the main unit. Here, they have used a proprietary Molex-style plug at the system end of the speaker cords like they have done with their DVD home theatre systems. Personally, I would prefer that they use a two-conductor 3.5mm phone plug, or the older 2-pin speaker-DIN plug, both of these connections can allow for easier-to-replace, easier-to-modify speaker connection. Infact a lot of the music systems that were sold through the 1970s and 1980s with supplied “separate-piece” speakers, such as the “detachable-speaker” boom-boxes have used either the 3.5mm phone plug, 2-pin speaker-DIN plug or RCA plug to provide “plug-in” speaker connections and these have just worked as well for plug-and-play operation.

The speakers are a typical bass-reflex two-way setup but aren’t aggressively styled. One thing I am pleased about these speakers is that they are well-built and the enclosures use an all-wood construction rather than a plastic front baffle which shows the quality behind the system.

You have the ability to perform basic content-navigation tasks using the controls on the Sony CMT-MX750Ni’s front panel but you need the remote control to use this music system to the fullest. The system uses an “Inverse” LCD display as its display. This yields readable text but Sony could implement a monochrome OLED or fluorescent display rather than the LCD which makes it look “cheap”.

Other than that, when you operate the Sony CMT-MX700Ni or CMT-MX750Ni music systems, you find that you are operating a well-built music system. The switches and mechanisms don’t exhibit any sort of tackiness that can be noticed in a lot of bookshelf music systems. The remote control is relatively large and with it you have one-touch access to the sources and main functions as well as being able to do advanced functionality.

The FM tuner didn’t perform properly on the “pigtail” aerial that was supplied with the unit, especially as it was on the lower level of a split-level house. Here, I would recommend connecting it to a better FM aerial like an outside one if you want the radio to work properly in a difficult scenario.

This setup didn’t challenge the DAB tuner with it able to survey the DAB+ multiplexes in Melbourne and provide clear and reliable reception from any program on these multiplexes.

The CMT-750Ni and CMT-700Ni use an iPod dock that drops down from the front panel. This makes it easier to hide the dock if you are not using an iPod or iPhone with it. As well, the iPod or iPhone can lean against the front panel while plugged in without the need to use any dock adaptors. The only limitation with this is that you need to pull back a hard-to-discover latch before you can close the iPod dock.

The front-panel USB socket allows you to play music of a USB memory key, SD card adaptor or smart phone. But it is “live for power” only when system is in operation and supplies the power when you select other sources so you can charge up your Android smartphone or other USB-connected device. This situation is similarly true for the system’s iPhone dock and it could be tempting for users to dock their iPhone in this CMT-MX750Ni’s dock in order to charge even if the system is not playing. It could have the option to supply power to charge devices connected to the USB socket or iPhone dock even when the Sony music system is in standby.

When the Sony CMT-MX750Ni or CMT-MX700Ni plays Internet radio and loses the connection to the station, it doesn’t try to reconnect to the station unlike the other Internet radio products I have used. Here, it just goes back to the main menu and you have to retune to that station, and this can be annoying with over-subscribed Internet streams. Other than, the Internet radio experience works properly as best as the link can allow.

This system works as an audio device in the DLNA Home Media Network. This includes the ability to play audio content that is “pushed” to it from a DLNA-compliant control point like Windows Media Player or TwonkyMedia Controller. It serves this function properly whether you pull the content up using the unit’s control surface or push the content out using a DLNA control point.

There is the ability with these Sony music systems to adjust the tone of the sound system. This can only be done using the remote control and you have to press the EQ button on that controller. Here you have access to bass and treble adjustments but you can also enable a “Dynamic Sound Generator” mode using a separate button. This may add “extra bite” to some recordings but may not yield difference with other recordings and may be about providing “big speaker” sound out of small speakers.

The sound quality is typical for a high-end “micro” form-factor music system but can clip or sound “muddled” around just near the maximum volume point. I have observed this with recent popular RnB music which is tuned for a loud sound with excessive bass but It can “go loud” on recordings that weren’t tuned “loud”, although I have had the CMT-MX750Ni run at “flat” tone settings.

I even ran this system on a DAB+ broadcast of an ABC Radio National program and had noticed that the speech from the show’s presenters came through very clear, crisp and intelligible. This didn’t matter whether it was a man or woman speaking in the show.

Limitation and Points Of Improvement

The “pigtail” aerials (antennas) supplied for DAB and FM use are inadequate for reliable FM or original-specification DAB digital radio (UK, Denmark, etc). As well, these supplied antennas remind you of using the typical clock radio which has this kind of FM aerial and are out of character with this system’s class. It could do better with a “whip-style” aerial similar to what is used for the Wi-Fi network connectivity and could support “single-input” aerial setups through an option.

Other connectivity improvement that It could also benefit from include having a pair of RCA line-input connectors or a “tape-loop” set of input and output RCA connectors on the back of the system for whenever you connect a computer, tape deck or other piece of audio-equipment in a semi-permanent manner. It can also benefit from a headphone jack for private listening purposes. Similarly, it could also benefit from integrated Bluetooth A2DP functionality so it can work with phones and media players that use this medium as a way of transmitting music data. 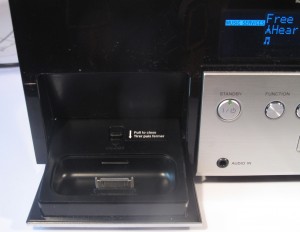 I would also improve the iPod dock so that you don’t have to operate any latches to open or close the dock. As well, I would provide the ability to charge smartphones connected to the USB socket or docked in the iPhone dock while on standby as a user-selected option. This can allow the user to keep an iPhone or other smartphone “topped off” when docked or connected to the system.

Another point of improvement would be to allow the CMT-MX750Ni music system to retry Internet-radio streams if the stream it is tuned to “gives up the ghost”.

I would also like to see the Internet-media and home-network-media functionality implemented into most of Sony’s bookshelf-stereo range and / or for Sony to develop a network-connected CD receiver along the same lines as the Rotel RCX-1500 CD receiver I previously reviewed.

I would recommend purchasing the Sony CMT-MX750Ni or CMT-MX-700Ni network-enabled music systems for use in a small room like a bedroom, den or office. It may work well for use in an apartment’s small living area.

On the other hand, I wouldn’t use this music system in situations where it is expected to fill a large room with music or play in a noisy area like a party or cafe.