I am reviewing the Kingston Wi-Drive mobile network-attached storage unit which works in a similar manner to the Seagate GoFlex Satellite. This is where the mobile NAS works as an access point and storage device for a mobile device like a smartphone or tablet based on the iOS or Android platforms. The mobile clients require the use of an app available from their platform’s app store to be able to function properly. 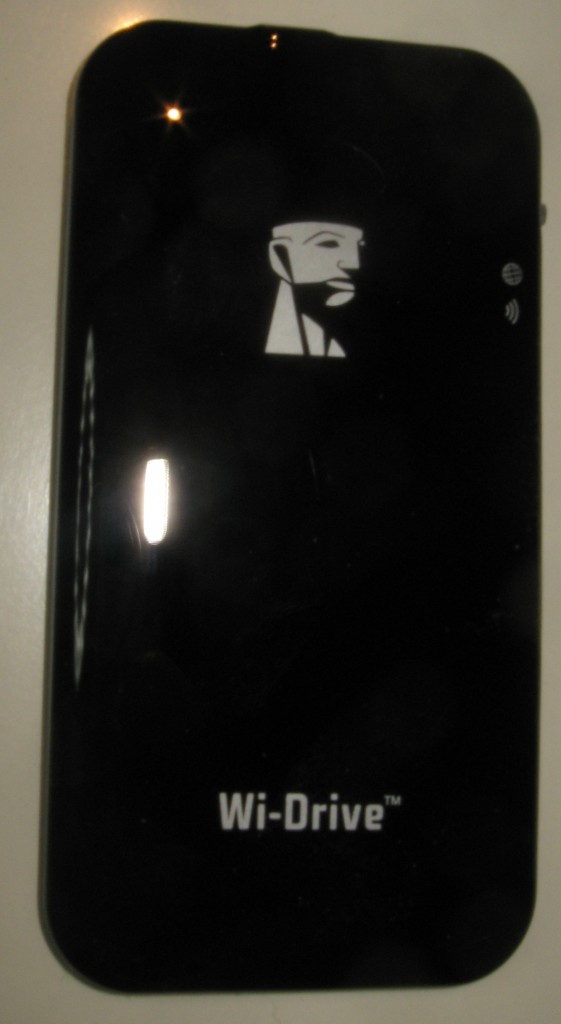 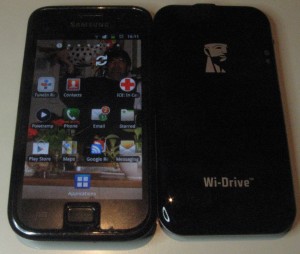 The Kingston Wi-Drive is a small glossy box about the size of a smartphone and runs from its own rechargeable battery when it is functioning as a wireless NAS. This is charged through the USB port, which is also used to connect the Wi-Drive to a computer for transferring files in and out.

When this unit is connected to a computer, it is presented to the host as two logical drives. One is a CD-ROM drive for the unit’s firmware and other essential files while the other is the user storage space. The file transfer speed is typical for a USB 2.0 device which I noticed when I transferred a batch of music files to it to assess multimedia reliability and USB transfer behaviour.

On the other hand, the way the Wi-Drive uses the two logical volumes is a limitation if you want to do something like connect it to a media player that has a USB socket. Some of these devices expect a USB memory key which presents itself as one logical volume to be connected.

The Kingston Wi-Drive NAS presents itself as an access-point for the mobile device, but has the ability to work as a wireless router between an existing Wi-Fi network segment and the network segment it creates. It uses a weird routing setup which is dissimilar to the typical wireless router where you don’t have the ability to pass through ports between client devices and the NAS.

As far as discovering files via the network, it presents a mobile Web page or uses a client app available for the iOS platform or the Android platform to view the files in an interface-native way. The current iteration of the iOS app works in a read-only manner where you can just view files rather than offloading your iPhone’s files to it.

The Wi-Fi functionality works properly with multimedia in the way that it can stream without any jittering or similar problems, which would be important when it comes to playing music or video files. I have observed this with the Wi-Drive loaded with a bunch of MP3s and it streaming to my Samsung Galaxy S Android smartphone via the Wi-Fi link.

The Wi-Drive can work in its network capacity if it isn’t connected to a computer as a USB storage device. This means that it can be connected to a USB battery charger, self-powered USB hub, high-capacity external battery pack or similar device to charge its battery or avoid compromising its battery runtime. It is something I have done with this Wi-Drive where I connected it to a high-capacity external battery pack that I use for my phone so it can run for a longer time.

The Kingston Wi-Drive could benefit from some improvements as far as network functionality goes.

The network setup routine could work well with a proper WPS push-button method when used with Windows 7 laptops or Android mobile devices. It can then create a secure wireless segment out of the box with these devices without the user falling to the default open-network setup which makes the device’s content vulnerable.

Then , it could be able to work as a Wi-Fi client so that it can share its file resources to an existing Wi-Fi network rather than the network it creates. This can be useful if you are using a “MiFi” router as an existing edge for a mobile WiFi network and you want to simply make files available to that network segment, or simply load this device with files from computers on your home network.

It could subsequently benefit from SMB/CIFS network-file-transfer support using Samba. This means that computers running most desktop operating systems like Windows, MacOS X or Linux can discover the NAS and transfer files to and from it like you can with a regular NAS. This could then make the Wi-Drive a useful wireless file-transfer point for a small mobile network.

Similarly, the Wi-Drive could have native support for UPnP Discovery and DLNA Network Media Server functionality. The former function can allow a Windows XP, Vista or 7 computer to discover it and have quick access to the user interface. The latter function can then allow it to be a mobile media server for WiFi enabled media devices like Internet radios that support this functionality and are used “in the field”.

This is important if we move towards Wi-Fi-enabled car-audio equipment and you want to use this as the equivalent of that old glovebox full of tapes or CDs.

Primarily, I would see the Kingston Wi-Drive as a USB flash-drive storage for use with a regular computer. But it also works well as a network-based “file-pickup” for laptops and mobile devices.

If the software was worked further, the Wi-Drive, like other mobile NAS devices, could serve a greater purpose. As well, I would like to see Kingston innovate rather than imitate Seagate.

The Aereo Supreme Court Test–A repeat of the Betamax case