I am reviewing the Western Digital MyNet 8-port Gigabit Ethernet Switch which is an Ethernet switch that is positioned for use as the “central” switch in a wired-for-Ethernet house. This device, which is part of Western Digital’s entry into network infrastructure hardware also has a port-based quality-of-service setup in order to prioritise traffic serving multimedia or IP-telephony devices. 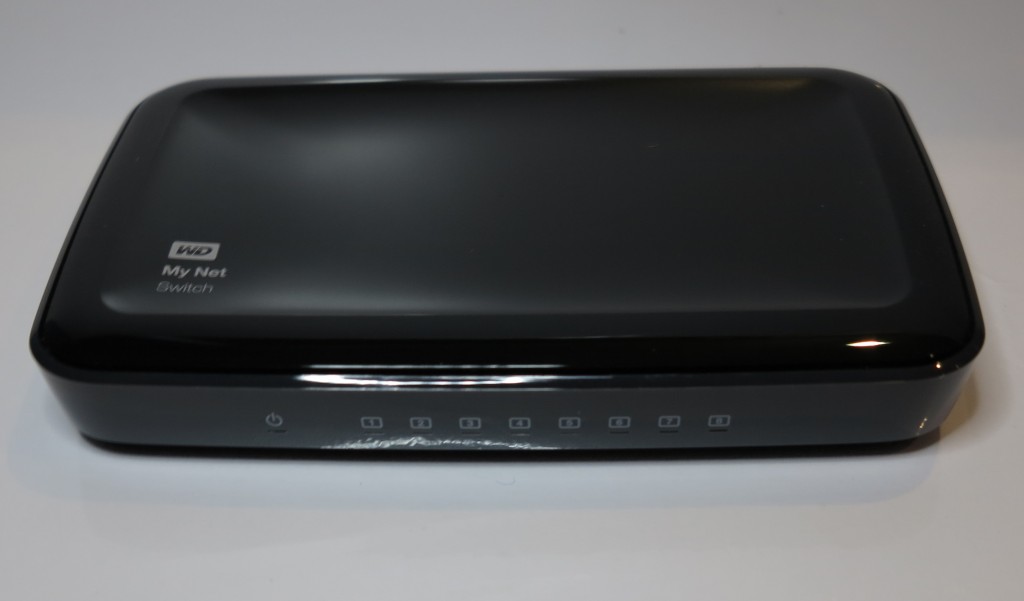 The WD MyNet Switch has a setup routine that is typical for any unmanaged Gigabit Ethernet switch that is pitched at small network use. This is where you simply plug the Ethernet devices in to the switch, then connect it to the power.

But this switch implements a port-based quality-of-service setup with dark-green ports for high-priority traffic, light-green for medium-priority traffic and orange for best-effort traffic. This is to assure that VoIP and audio/video streaming is passed through without any glitches.

In the product documentation, Western Digital recommends that a NAS full of multimedia files or PVR acting as a DLNA Media Server be plugged in to a light-green port and a network media device is plugged in to the dark-green port. This would be of best effect if you were viewing content held on the server without glitches caused by email checks or Web-surfing.

Compared to a lot of Ethernet switches, the Western Digital MyNet Switch has the status lights located up front rather than the lights being next to the Ethernet sockets. This may be a benefit if you have the unit on a desk or mount it to the wall using the keyhole slots and you have the sockets located on the opposite side. Here, you can still troubleshoot the network connectivity and link speed without having to swivel the unit around.

Here, I connected it between a UPnP-enabled printer and my computer then power-cycle the printer to see whether the printer presents itself as a UPnP device to Windows 7. The printer had presented itself properly to Windows 7 as a UPnP device. Subsequently I had plugged my WD MyBook World Edition network-attached storage device in to this switch and kept an eye on the availability of its DLNA server from behind the switch and it was still available.

There is inherent support for quality-of-service prioritising but this is a port-based affair. Here certain ports are coloured in distinct colours for applications where high QoS is desired with some marked as “Low” preferred for LAN, off-ramp and router uplinks. You may have to do things like plug the smart TV or network media player in to the green ports while you plug the regular computer that does a lot of Web traffic in to the orange ports.

There is no quality-of-service pass-through or trunking available with this switch for use with LAN connections. This can be an annoyance if you are trying to prioritise multimedia data across the whole network and is due to the industry not implementing standards for assuring quality-of-service across a logical network.

I would recommend the Western Digital MyNet Gigabit Ethernet Switch as a “central” switch for a small Ethernet network where quality of service for multimedia applications is considered very important such as most home networks. It would also keep the home network “futureproof” for IP-based telephony if the telephony equipment is connected to a “green” socket.