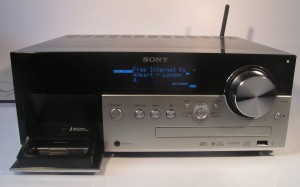 Apple iOS users have had the advantage of also having a USB single-wire or docking connection between their iOS device and accessory equipment, with the ability to channel the sound data, the control signals and power to their device using the same connection. This has built up the iPod / iPhone accessory market very strongly with the accessories allowing the user to start and stop the music or move between tracks and folders on their iPod or iPhone using the control surface that the accessory provides.

People who used Google Android devices were limited to an analogue or Bluetooth audio link between an amplification device and their smartphone or tablet with support for transport control if the phone was connected via Bluetooth. They typically had to run a separate USB cable if they wanted to supply power to the Android device from that accessory.

Now the latest iteration of the Android platform, known as “Jelly Bean” and version number 4.1, supports USB Audio. This is similar to how a USB speaker system or external sound card can work with most desktop operating systems. It can then allow a large manufacturer base to develop “Android-friendly” audio playback equipment like speakers, Internet radios and hi-fi amplifiers / receivers in a timeframe that allows the device to be “ready-to-market” quickly.

What could be looked at

There are some questions I have about this kind of setup. One is whether the USB Audio functionality in Android Jelly Bean can allow for communications audio as well as audio content from the media player program. This would be of importance with automotive applications where the USB Audio link could be used as an alternative to Bluetooth for hands-free telephony in the car.

The other issue to look at is exposing the accessory device’s control surface as a control point for the Android device’s communications and media-playback functions. This situation would be of importance for accessory devices which have other audio or video sources like broadcast tuners, optical-disc players or USB Mass-Storage device connection. In the automotive context, it also extends to nearly all car infotainment setups that allow the user to make or take a call using the controls on the dashboard.

Similarly, MirrorLink or similar techniques culd allow the accessory device to be configured or controlled in an advanced manner using the touchscreen on the Android device. It could come in handy with A/V equipment which may need specific configuration and setup procedures or Blu-Ray players that may expose “second-screen” interactivity functionality on the handset.

At least, Google have integrated commonly-accepted open standards to add functionality to Android in a manner as to rival the established Apple mobile-device platform and stimulate a healthy competitive design environment.