I am reviewing the Toshiba AT300 which is their current-model 10” Android consumer tablet computer. Compared to most other tablet computers, it is available in only one configuration which is a 16Gb unit which works only from Wi-Fi wireless networks. 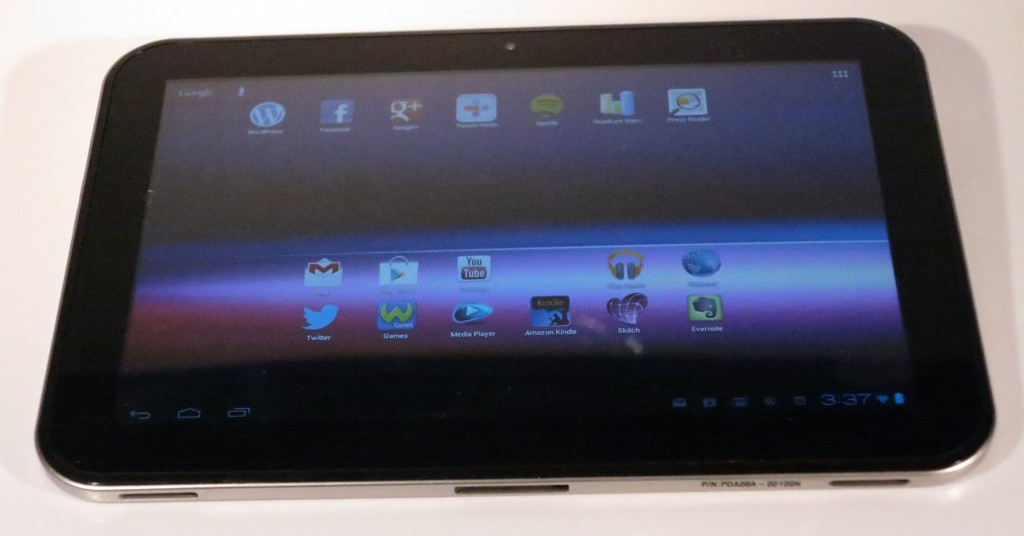 The Toshiba AT300 was well built for a good-quality tablet and had a metal-mesh backing. It was also well finished even though the glossy touchscreen was able to get the fingerprints too easily.

As for temperature control, this unit was able to keep its cool thanks to he mesh backing. This may be important if we see Android apps that work the Tegra 3 ARM processor very hard.

The Toshiba AT300 tablet’s display was very responsive to the touchscreen input, showing the results very quickly and rendering the animations that Android Ice Cream Sandwich put up very quickly. Still pictures come through very crisply with this tablet, making it suitable to use as a photo viewer or digital photo frame for home or business.

For video playback, the display subsystem even shone with the smoothness even when fed the video via an on-demand video service. As I have said before, the glossy display is still prone to be too reflective in broad daylight.

The Toshiba AT300 played some music files from my networl-attached storage device as well as Internet hosted audio like Internet radio and this worked very smoothy. The sound quality was very good when I used the device with  lot of slim devices, audio quality doesn’t make it with the integrated speakers

The Toshiba Media Player app that comes with this tablet is no crapware – it works properly with DLNA media servers as well as content hosted locally on the tablet. I tried this out with music and photos held on a WD NAS that uses the TwonkyMedia Server software as its DLNA media server.

The Toshiba AT300 used a MicroUSB data port but also used a proprietary docking connector for its power supply. This is to primarily work with a tablet dock that Toshiba supplies as an optional extra, where it has an audio output, standard USB connectors and standard HDMI connector.

But the MicroUSB connector could be a data / power port so you can use the standard MicroUSB cable with a charger rather than worrying whether you have the Toshiba cable or not. There is also a microHDMI connector that you can use with a suitable cable to connect to HDMI-equipped external displays.

Like most Android tablets, the Toshiba has an integrated SD card reader which you can use to effectively expand your tablet’s memory. This is also handy if you want to use the tablet to review and edit your images that you just took with your digital camera.

The network performance was very smooth for most activities including video streaming. The unit was also very sensitive for the Wi-Fi reception.

I ran the Quadrant Android performance test and found that this unit comes in at a benchmark of 3985 which works just under the ASUS Transformer Prime TF201 hybrid tablet. This shows that it can come up properly with its peers as far as computing and graphics performance go.

As far as the battery life was concerned, the battery yielded 80% left after I watched one hour of on-demand video via the home network. It was also very frugal with the battery for most other activities.

If Toshiba were to create a tablet that is a viable iPad alternative, they could supply a variant with an integrated wireless broadband modem. On the other hand, this tablet could just be used with the home Wi-Fi network, a public-access Wi-Fi network, a “Mi-Fi” router or an Android phone that supports Wi-Fi tethering. 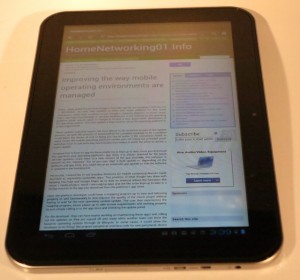 As well, I would like to see this tablet put in the queue for the Android 4.1 Jelly Bean update in order to satisfy newer expectations that would be required of this platform.

This may be a hard decision to call but I would recommend the Toshiba AT300 as a 10” consumer-grade highly-capable alternative to the Apple iPad. This is more so if you value the tablet to he just about up to date on the operating environment and expect it to be used for multimedia, games, email-reading and Web-surfing while in bed or on the couch. Business users could value it for use as part of digital visual merchandising efforts, as a large-screen reference book or quick-view information terminal.

How can we differentiate the Android tablet further?

DLNA-compliant media software for the Apple iPod Touch and iPhone