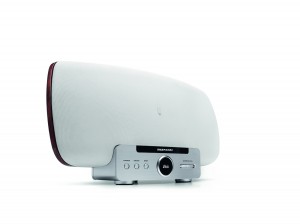 Over the past sixty years and for as long as the existence of the “hi-fi” concept, Marantz has been known for high-quality sound reproduction with unforgettable legends such as those gold-finished hi-fi receivers and amplifiers that appeared through the 1970s. At times, this brand has dabbled in car and portable audio in order to broaden the scope of their name being associated with this high-quality sound.

Now they are celebrating this concept with a tabletop speaker dock that has a name that throws back to their first hi-fi amplifier. This device, known as the Consolette, has been reshaped so there is better stereo separation compared to most single-piece speaker docks, wireless speakers and boomboxes. This has been achieved through the use of a V-shaped back profile and a wooden back as well as the use of specially-arranged speakers. There has been further attention paid towards how the sound is reproduced from that smartphone, DLNA-compliant media server, Internet radio station or other audio device.

Even the aesthetics of this system remind users of the Marantz heritage like tue use of a jog wheel that is similar to the large thumbwheel that you used to tune in stations on a 70s-era Marantz tuner or receiver. As well it could be controlled by a high-quality remote control or an app that runs on your smartphone or tablet.

But the Marantz Audio Consolette has become another representative of high-quality audio for the connected home as I have seen over the last few years and commented on in HomeNetworking01.info. This is where I have seen and, in some cases, heard in action equipment that reproduces music held on a computer, mobile device or network-storage device to highly-exacting audio-quality standards while there are other systems that can do the same job at a cheaper price although not as exacting.