I am reviewing the Pure Jongo A2 Wi-Fi / Bluetooth audio adaptor which connects to one’s favourite stereo system or a pair of active speakers to play content from a computer, network or mobile device. This is achieved through Wi-Fi DLNA technology or through Bluetooth A2DP technology.

It is part of the Pure Jongo ecosystem which has integral support for synchronous playback of network-hosted sources over the same network and is managed via a Pure Connect mobile-platform app for iOS and Android. 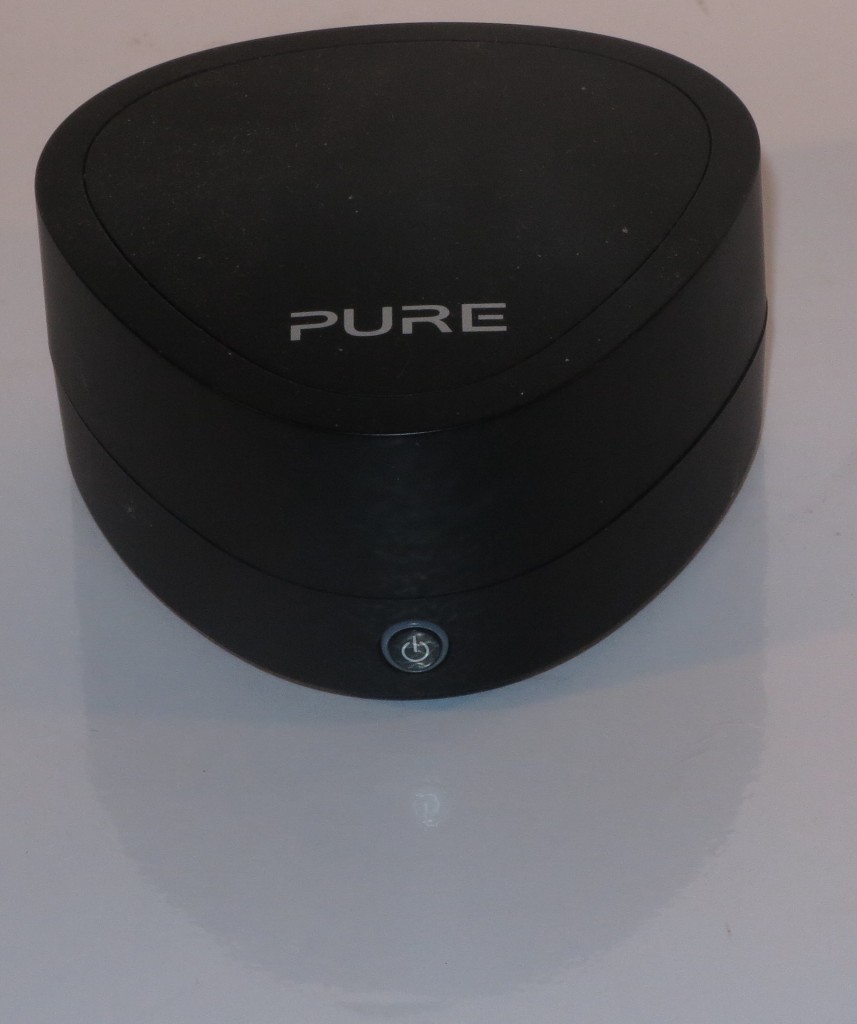 The unit is slightly bigger than a 500g (“pound”) block of butter and is shaped like a triangle with curved sides. There is the ability to style it your way using optional decorative collars available from Pure, but this size also makes you want to take it with you to hook up to any sound system at any location. 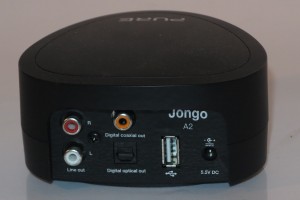 For connectivity, the Pure Jongo A2 covers all bases as far as consumer audio and AV equipment is concerned.  Here, you have a pair of RCA connections to provide a line-level audio connection to any vacant auxiliary or tape input on your sound system. If you are using a digital-analogue converter, a home-theatre receiver or a digital amplifier, you can connect this network audio adaptor to this digital inputs on that component using the coaxial (RCA) or optical (Toslink) connections. This lets you use the better digital-analogue signal path offered by these devices as well as obviating the risk of electrical noise in the signal that can come about with longer RCA-cord analogue connections.

When it comes to the home network, you have the ability to connect to an 802.11b/g/n Wi-Fi wireless segment. This supports WPS push-button setup or you use the “own access point and Web interface” for integrating this device in to your existing small network.

The Jongo plays properly as a DLNA MediaRenderer device where it can reliably accept a run of audio content that it is directed to play via the home network. I had this playing a run of albums through the household stereo system by “finding” the files on my WD My Book World Edition NAS using Twonky Mobile on my Samsung Android phone and using that app to have it play the tracks.

The Pure Connect app provides the multiple-speaker functionality for content held on your device as well as Internet-radio content hosted through the Pure Internet-radio directory service.

As a Bluetooth A2DP endpoint, the Jongo A2 had played its part very well with my Samsung Note 2 smartphone by running the content streamed to it very smoothly even though the phone was two metres from it.

If you do want to make sure that this device works at its best, yielding a clean sound from your existing stereo system, make sure that the Bluetooth output volume for your Bluetooth-capable phone is at 75%. Similarly, bypassing any tone controls on your media player software and adjusting the tone on your stereo equipment’s control surface keeps the setup sounding at its best without the risk of sound that is too much like that pub jukebox.

If you are using a UPnP AV / DLNA media controller or Pure’s Connect app to manage this device, make sure that the output volume is no more than 75%-80%. Personally, I use the volume control on the stereo system to adjust the volume to how I want it to sound at a particular moment.

A teenager who lives with us was very impressed by the fact that the Pure Jongo A2 had “all bases covered” and was not being tied to an Apple-only ideal when it came to audio-equipment connectivity.

As we see the arrival of other services like Pandora and Spotify, the Pure Jongo system could offer app-level connectivity to these services. This can also be augmented by the use of software for Windows 8.1 and Macintosh OS X so that small notebooks, tablets and similar computers based on these regular-computer operating systems can play along with the Jongo ecosystem.

The Pure Jongo A2 could offer integral Apple AirPlay support for those of us who want all wireless-connectivity bases covered in one box. Similarly, Pure could offer a variant of this device that has the ability to stream audio content from another sound system into the Jongo speakers that are on the network, which could please those of you who work with vinyl or other legacy formats or who want to stream the output of a PA system used by a band, MC, DJ or similar user to other Jongo speakers.

As for network abilities, it could benefit from dual-band Wi-Fi connectivity and / or Ethernet connectivity to avoid the problems that are becoming associated with a crowded 2.4GHz band. The Ethernet functionality could come in to its own due to the fact that it would be used with equipment that is normally kept in one place.

I would see the Pure Jongo A2 as a tool to provide an “open-frame” bridge between your smartphone, tablet or laptop with Bluetooth or your DLNA Home Media Network using Wi-Fi. You also can add Internet radio to this mix using the Pure Connect app’s access to Pure’s Internet-radio directory. Even if you do have an Apple AirPort Express in place for AirPlay connectivity, you are able to effectively have “all bases covered” with this device.

The digital connectivity effectively lets you use the better digital conversion circuitry in your home theatre receiver or digital amplifier in a way that the Apple AirPort Express and a lot of other similarly-priced devices don’t..

A Shazam-like service integrated in a set-top box