I am reviewing the Western Digital MyNet Range Extender which is a surprising take for the new crop of Wi-Fi range extenders. This dual-band range-extender has the Ethernet port so it becomes a client bridge for an existing Wi-Fi segment, but it has the ability to work as an Wi-Fi access point for a wired network segment. This means that it can be set up to extend a wireless network’s coverage once you use it with a HomePlug AV kit or an existing wired Ethernet backbone. 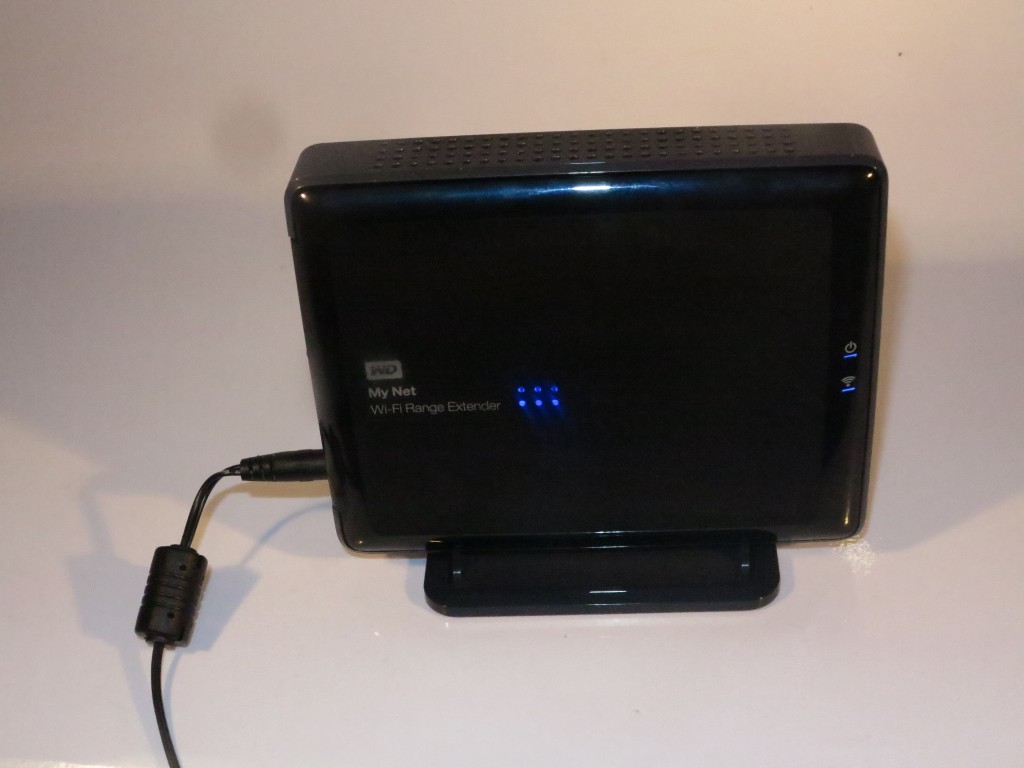 A lot of devices of this class can show their worst side when you are setting them up and integrating them in to your home network. Manufacturers tend to say that they are easy to set up but they can be difficult to set up for reliable operation. 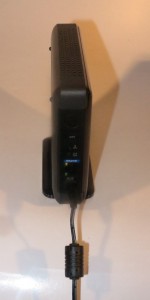 Connections on rear of the range extender – Ethernet connection, band selector and power

The WD MyNet Range Extender is very much close to plug and play installation if you are using a router or access point that works with the WPS “push-to-setup” method for the wireless network. On the other hand, you have to log in to a special SSID to set the unit up for most networks. Don’t expect this dual-band range extender to work like a radio or TV “translator” station where it can pick up on one band and extend the network to another band, like picking up on the 2.4GHz band and repeating to the 5GHz band – it doesn’t support this functionality.

There is the problem of a worrying error message that mentions that the network connection has failed when you are setting up wirelessly even though it can work. Another problem that also worries me is the use of the same SSID and channel for “extending” the network. This can cause problems that lead to this same error message due to a “beat” frequency being created by the range extender or the risk of a data storm being created. As well, I had to configure the range extender so that its “extended” area is identified separately to the main router so as to identify if it is working properly.

Other than that, the use of a signal meter on the side of the WD MyNet Range Extender allows you to determine how strong the signal is to allow for optimum positioning, whether it serves as a range extender or a client bridge.

The WD Range extender also works well as a client bridge for an Ethernet-ended device even while it works as a range extender, serving one or more wireless devices. This is although the manual says that it is to serve on device but if you use a switch with this device, it could be a different case. It is worth knowing that the bandwidth for the wireless cell created by this device is effectively half of what would be normally available from the router but this is more about assuring reliable operation for your network equipment and it would be installed at the “fringe” of your main access point’s coverage.

The fact that the DC power comes in from the supplied AC adaptor as 12 volts 1.5 amps may also please people who may want to use this device in a vehicle or a boat to “draw out” a caravan park’s or marina’s Wi-Fi coverage or feed it to an Ethernet device without the need of an inverter.

On the other hand, I had a fair bit of trouble getting this unit to work as an access point and found that the review sample wouldn’t even obtain the DHCP address and identify itself on to the network. Following the instructions in the online manual was a futile exercise and I would suggest that WD make the job of setting up as an access point an easy effort. For example, the use of DHCP or Auto-IP be implemented properly on the Ethernet connection in this mode.

I used the WD MyNet Range Extender as a “fringe coverage” extender for the existing network and found that it was able to work with my phone when it came to streaming Internet radio at the London-based station’s maximum rate.

I also ran it as a client bridge but it also works as the “fringe coverage” extender and it was able to work properly with an old laptop that didn’t come with integrated Wi-Fi wireless.

Similarly they could have this unit be able to work properly as an access point including using DHCP or Auto-IP setup for integrating itself to the Ethernet segment so you can configure it. It could also support an “access-point” setup mode for simplifying the setup of an extended-service-set where one of the access points is equipped with WPS or you run it as a “client bridge” or range extender and it locks on to the wireless network you intend to “extend”. This issue could be sorted out through a firmware update that could apply to equipment that is in current circulation.

As well, there should be a “client WPS” button so you can quickly enroll client devices to the MyNet Range Extender rather than just enrolling the Range Extender to the host router.

Like most wireless range extenders, the WD MyNet Range Extender would require a bit of work in getting them to extend a small wireless network properly. It works well as a client bridge but the access point function does need more work on it. I would recommend it more as a dual-band client-bridge or range extender for someone who has had experience in setting these devices up.