I am reviewing the Denon CEOL Series music systems and had a chance to review the CEOL but am focusing on the CEOL Piccolo. Both these stereo systems are “three-piece” micro systems with a main unit and two speakers, and can work with Internet radio, Last.FM, Spotify, DLNA Home media networks and music held on USB storage or an iPod device. The larger CEOL system also has an FM broadcast tuner and a CD player whereas the smaller CEOL Piccolo just focuses on the online sources. 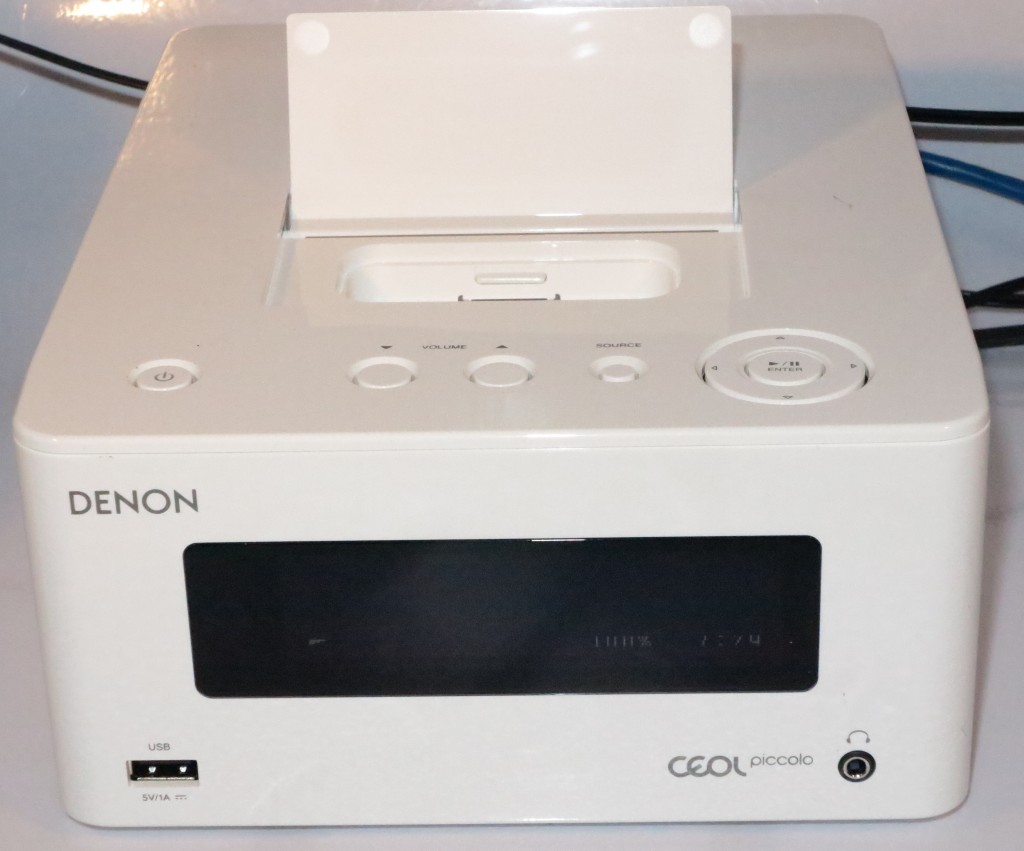 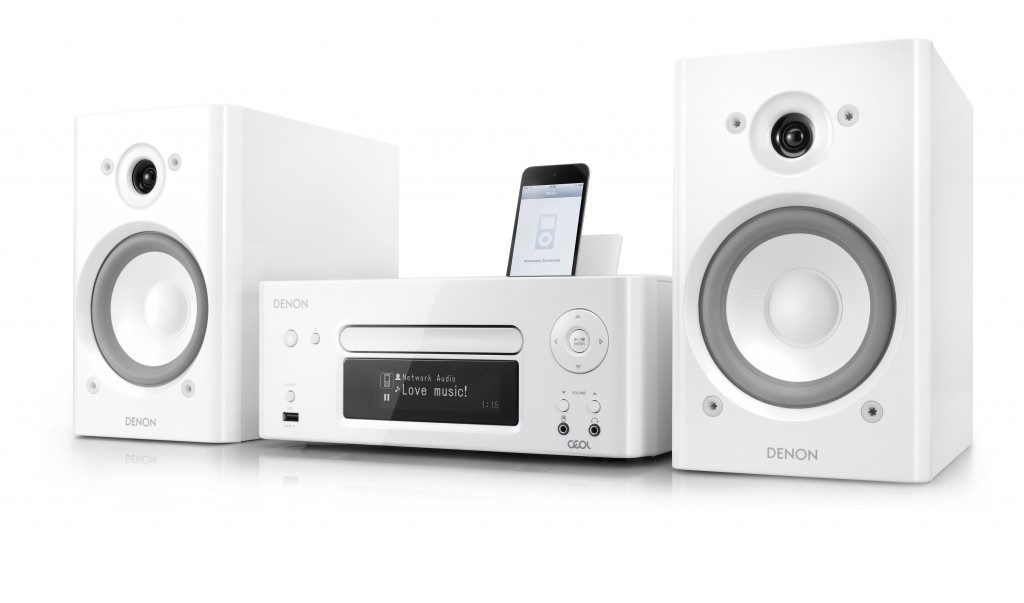 Denon CEOL with CD and FM radio as well

The Denon CEOL stereo systems come with a comprehensive remote control or can work from a Denon smartphone app available through the iOS and Android app stores. But they can be worked from the units themselves, with the CEOL’s controls on the front and the CEOL Piccolo’s controls on the top of the main unit.

The main units in these systems are equipped with a monochrome bitmapped OLED display which is a delight to use. Here, the display is bright and easy-to-read, which I find is important for older people or those of us who don’t have good eyesight. As well, the bright display also comes in to its own if you are one of those people who like that dim lighting for romance.

Both systems are very easy to integrate in to your home network with them running a “quick setup” when they are first connected to AC power. This same option can be invoked through the Setup menu which is selected as a “source” when you use the Source button. They can work with most small Wi-Fi wireless networks that implement passphrase-based WEP or WPA network security.

The Denon CEOL comes with a tacky piece of wire as its FM aerial (antenna), which doesn’t do the system justice. Here, I would like to see something better like the classic “T-wire” aerial like what most manufacturers use for their receivers and tuners or the “rabbit’s ears” aerials that were always used with portable TVs. Even the Internet radios that I have reviewed used that telescopic aerial that most portable radios use as their aerial. On the other hand, I would recommend users connect the CEOL to the outdoor TV aerial or buy an indoor TV aerial like the classic “rabbit’s ears” if they want to use it for FM broadcast radio.

The USB port on both these systems can only supply power to peripheral while the equipment is fully on, which can be a limitation if you wanted to charge that Android smartphone overnight. It supports “remote IOS” behaviour where you can connect Apple iOS devices to this port and they behave as if they are iOS devices connected to the docking connector on top of the console unit. This is important when you use an iPad, iPod Shuffle or any newer iOS device that uses that Lightning connector for power and data connectivity.

The USB connections on both systems can also work with Mass Storage Devices like USB flash drives but can’t support MTP functionality which is important with some MP3 players and newer Samsung Android phones.

The speakers that come with the Denon CEOL systems are very well-built and have that piano-gloss finish. The grille is of an unusual shape but the cloth is fixed to a removable plastic frame.

Of course, they yield a clear tight sound with that proper bass response that can do a lot of music justice. Here, you could notice that punchy sound through the newer dance tracks or hear the whole of the sound mix with clear vocals.

Also, I have found that I could run the Denon CEOL systems to 80% of the volume level before they started to clip and sound awful. At that point, it is loud enough to fill a medium-size room. This shows that they are very capable for a small music system.

The CEOL systems do work well for Wi-Fi network reception if they are picking up a good signal from the access point. They also have an Ethernet connection which would allow them to be connected to an Ethernet or HomePlug AV segment for more reliable operation.

As for Internet media reliability, they don’t handle things well if the Internet media source isn’t working well for quality-of-service, which can happen at peak times for Internet-radio streams. Here, they give up the ghost on the stream and require you to re-select that stream if you want to continue listening to it again. This is unlike a lot of Internet radios that provide a better allowance for failure by having a longer wait time.

The CEOL systems work properly as a part of the DLNA Home Media Network in that they can either pull up content from a media-server device or can accept content that is pushed to them. The interaction for this feature is very quick, including advertising their presence to a control point.

I am finding that it is hard to look for limitations that concern the Denon CEOL music systems, especially for the kind of user that it is targeted at. It works to the DLNA standards and is easy to use from your smartphone, remote control or the unit;s control panel.

Like a lot of these systems, the USB port could have a user-selectable mode which allows “always-on” power so it can charge mobile phones even while it is on standby.

Denon could also supply models in to this series with a DAB+/DMB tuner or HD radio tuner for markets where these digital broadcast systems are in situ. This is because I have noticed the Sony CMT-MX750Ni being able to work with DAB/DAB+ broadcasts.

Similarly, they could offer a variant of the CEOL with a DVD or Blu-Ray player, an HDMI input and HDMI output with Audio Return Channel, and “two-speaker surround”. This would be pitched as an answer to Yamaha’s MCR-755 micro A/V system and build out the “quality” home entertainment system for a dorm room, studio apartment or similar application.

Here, this could be a way for Denon to build out the CEOL range as a series of high-quality micro-form-factor 3-piece AV systems.

I would recommend the Denon CEOL or CEOL Piccolo as an option for any  application where you value good sound quality but desire a music system that doesn’t take up too much space. This could range from something that would work well in that nice studio or one-bedroom apartment in the city to something that could work as a personal music system for that master bedroom or den.

Here, I would value the CEOL for anywhere that you place importance on CD playback, FM broadcast radio or “walk-up” device connectivity. This is important with hotels and serviced apartments who want to have a system that best suits their premium offerings. The CEOL Piccolo would be of importance if you just value file-based audio, online audio services like the “new shortwave” as in the Internet radio or want something for that MP3 player.