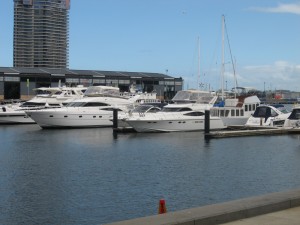 You have that narrowboat, houseboat or large cabin cruiser that has effectively become your home away from home. In some cases, you may be spending a lot of your retirement years on this boat. But what about your Internet connection?

Netcomm have answered this need with their NTC-30WV-02 which is a “Mi-Fi” router that is optimised for the marine life in freshwater and saltwater. It works with most 3G wireless broadband services which will cover most inland freshwater and 60km off the Australian coast. That figure may be accurate for the East of Australia and similar coastlines that have many towns and cities and use the 800Mhz and 950Mbz spectrum for 3G wireless broadband.

For the LAN side of the equation, it uses 802.11n dual-stream MIMO for the Wi-Fi segment and 10/100BaseT Ethernet as its wired segment. This is being pitched not just for smartphones, tablets and laptops but also for network-capable navigation devices that will start to exist on the bridge of many pleasure craft.

Both sides of the equation are serviced by proper user-replaceable dipole aerials (antennas) which have a greater chance of yielding better 3G and Wi-Fi performance than the typical “Mi-Fi” router with its integrated aerials. It also could mean that a boatie could install stronger 3G aerials on this 3G router to satisfy more reliable performance when the anchors are up or they decide to

The same device also has a socket where you can connect a standard telephone handset or analogue / DECT cordless base station so you use the 3G connection to make and take calls on the boat. This can make things “sound normal” if you want to contact someone on land or they want to contact you out on the water because of the mobile number associated with the SIM card associated with your service.

This modem would come in to its own with “shared” and “family” data plans that cover multiple devices and use a large data allowance. But it can come in handy with “high-end” data and mobile plans that have higher data capacity if this is your sole connection like, for example, a retiree who lives out on the water.

The device can connect to a 12VDC 580mA (peak-demand) power supply which would apply to most of the “live-in” boats.

What I would like to see for this device is some support for WPS-PBC connectivity such as a membrane switch or terminal block so one can add on a “WPS PBC connect” button. Here, this can provide the quick wireless-network enrolment for devices and software that support it like Windows 7/8 computers, Android phones and most consumer electronics.

Similarly, this unit could be in a good position to support the new Wi-Fi PassPoint standards for hotspot login especially on the WAN side. Here, this function, along with a “range extender” or Wi-Fi to Wi-Fi routing function would team up well with the increasing number of marinas that are offering complementary Wi-Fi hotspot service as a service to the boaties who moor there. These features could cut out the extra hassle required with logging in to the Internet service whenever they arrive and tie up; and could allow for seamless cost-saving handover between Internet services.

Who know what this device and others like it could offer to the pleasure-boating community who work the coastline or inland waterways of many different countries in their vessels.

A major update for inSSIDer