I am reviewing the Marantz Audio Consolette speaker dock which is the first item issued as a tribute to Marantz’s 60th anniversary as a major force in hi-fi sound. The name came about from the first product issued under this brand which was an amplifier which was about top-notch record reproduction and mono hi-fi sound.

Here, we are talking about one of a few top-shelf speaker docks or network-enabled single-piece audio systems that are all about top-notch sound reproduction/ 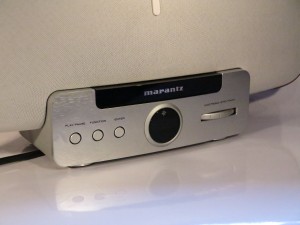 The Marantz Audio Consolette has been designed as a high-grade hi-fi system with a timber back panel that is effectively curved amongst other symbols of elegance.

There are the elements of style that are very consistent with some of the high-end Marantz amplifiers, tuners and receivers over the years, such as a large thumbwheel for tuning and a porthole style presentation for power / tuning-aid meters found on these components.

Here this is reflected with a large thumbwheel that serves as a volume control or selection control as well as a “porthole” display for showing the unit’s operational status including the current time. 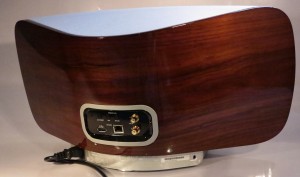 Rear view with wooden back

There are six power amplifiers integrated in this unit (3 per channel) and these are arranged in a combination of a bi-amplified and a bridged setup. For each channel, one 25 watt amplifier looks after the middle and high frequencies while a pair of 25-watt amplifiers bridged to work as a 50-watt amplifier handle the bass frequencies. This makes sure that this unit can provide a clean and meaty sound as well as not “running out of steam” when it is taken to higher volume levels.

The Marantz Audio Consolette follows the trend for most network-based audio equipment when it comes to network setup. Here. the device becomes its own access point and Web server during the setup phase to obtain Wi-Fi network parameters for non-WPS networks and you have to associate a smartphone, tablet or laptop that is equipped with Wi-FI to this access point and open a Web page hosted on the device’s Web server to determine your Wi-Fi network’s credentials. 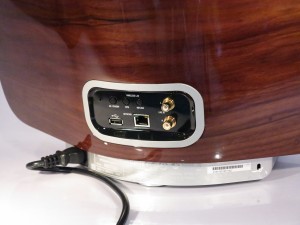 You can also connect this unit to an Ethernet network and the line-in connections for existing hi-fi components are infact gold-plated RCA sockets rather than the typical 3.5mm mini phone jack.

Pushing on the Marantz logo bar under the speakers yields a 30-pin dock for Apple iPhone and iPod devices that are suitable equipped such as the iPod Classics, the iPhone 4S and the iPhone 3GS. You may have to buy a Lightning-Connector adaptor to use this connection with newer iPhones or iPads.

If you are using the Internet radio function, you would need to use Marantz Consolette app to find the stations you are after but can use this to allocate them to the presets that you can use to directly access them on the remote control.

There is the large thumbwheel on the front of the unit for adjusting volume or selecting options and sources. But you can also operate this unit with its supplied infra-red remote control for source selection, track navigation and other basic tasks. Here, the remote control has that metallic feel that is all about quality equipment.

The Marantz Audio Consolette speaker dock does sound very clear with most sources and yields a very tight bassline that doesn’t dominate even with the latest dance tracks, which I had observed with a few of the Hed Kandi dance tracks.

I was able to get this speaker dock to 80%-90% of the volume level before it started to clip and sound awful, which shows that the amplifier array including the BTL-bridged power amplifiers makes for a very powerful system. This would make the Consolette be able to fill larger rooms like dining rooms or small lounge areas with good-sounding music and could satisfy party needs or even challenge the Sonos as a music system for that small café or bar.

As far as the home network was concerned, the the Marantz Audio Consolette worked well even on the “edge” of the Wi-Fi network segment, staying associated with the the Wi-Fi segment. When it cam to streaming Internet content like the Internet-radio channels, it kept the stream going and didn’t “give out” even in worse conditions.

Personally, I would see this system equipped with Bluetooth A2DP wireless audio for environments which don’t represent the typical small network such as business networks or resorts that implement Wi-Fi hotspots which require Web-based login.

As well, the Marantz Audio Consolette could benefit from access to Spotify and related services from Android and other devices or simply from the unit’s control surface.

To satisfy the newer network trends, this could benefit from dual-band 802.11n Wi-Fi networking as we see a move away from the crowded 2.4GHz band for the small Wi-Fi wireless network. The RCA connections can be complemented with a 3.5mm stereo jack for walk-up connection of smartphones, laptops and similar devices.

Similarly, Marantz could also provide the ability to operate Internet-radio and DLNA media player functionality using either the controls on the unit or the remote control rather than you using a smartphone app to perform these tasks easily.

I would position the Marantz Audio Consolette for a person who wants a single-piece speaker dock / Internet radio for an iOS device or for a small network that has DLNA-based media sources but places high value on the sound quality.

Here, the Audio Consolette could come in to its own with the trend for downsizing to the many city apartments or simply for use as something that can earn its place on the dining-room sideboard as a secondary music system.