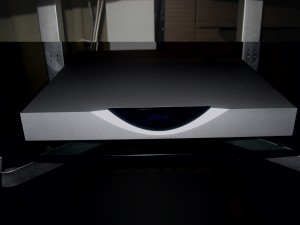 As I saw in the Australian Audio & AV Show 2011, there has been interest in the idea of high-resolution file-based audio as a way of conveying music that is fit to play on the latest high-end amplifiers and speakers. Equipment like the Naim NDX or Linn DS series of network media players where playing 192khz 24-bit FLAC files was second nature were being exhibited there.

Lately, Sony used the Internationaler Funkaustellung 2013 trade show in Berlin to premiere a series of hard-disk media players and music systems which are about reproducing these digital-audio files, alongside digital-analogue converters and Walkman portable media players that work with the high-resolution audio files.

Some of the recordings available in this form are either copies of the high-grade studio masters associated with new recordings or remastering efforts of classic recordings like Miles Davis’s “Kind Of Blue” or Pink Floyd’s “Dark Side Of The Moon” where the reference recording was the classic open-reel mono or stereo tape or PCM-701ES / PCM-1630 videotape (a digital recording made using a PCM adaptor and videocassette recorder) that the recording studio turned out as a master. It is an attempt to raise the standard of high-grade audio recording and reproduction above what was acceptable in the late 70s and early 80s.

Typically these files are delivered as WAV waveform files or losslessly-compressed files to the FLAC or ALAC standards. In some cases, efficient lossy formats like WMA or AAC may be used for this kind of recording. The specifications for most of these “master-grade” recordings are stereo or, in a few cases, multichannel 24-bit files with 88.2, 96 or 192 khz sampling frequency.

Downsampling and conversion for less-capable equipment

Some of the setups that I saw were based on a DLNA-based home network but the problem with most of the media servers out there is that they could only work reliably with equipment that provided inherent support for the FLAC, ALAC or similar files at the high sampling frequencies. This would typically be relegated to the high-grade equipment that would serve the main lounge area and is part and parcel of the functionality offered by most network-capable home stereo systems but there is the reality that you may use cheaper equipment for casual listening such as in the kitchen, bedroom or den.

One main feature that I would like to see would be to have DLNA media servers which are supplied with network-attached-storage units support downsampling to “CD-grade” quality for the cheaper equipment such as most of the network speakers. This could be to make available a stream that is a 16-bit 44.1khz or 48khz PCM or MP3 format for this equipment. These streams are exposed and discovered according to UPnP AV standards in order to provide best-case listening according to the equipment’s capabilities.

It is something that is part of the TwonkyMedia Server software but not all NAS devices implement the software or carry through this functionality even though were as seeing a lot of these devices have the processing power of an 2009-era netbook.

As well, if these servers offer DLNA-assisted “syncing” of music files to automotive or portable devices, they could perform the downsampling to this grade during the file transfer process if the user so wishes.  This is more so as these devices become part of the home network when it comes to handling digital content.

As for the PCM-grade WAV file which is a common carrier for linear PCM audio, this doesn’t support any metadata in its current form. Of course, this format is highly cherished by people who value high-quality sound reproduction but you work around this either with a file-folder structure that represents your content or a sidecar file which carries the full metadata.

This could be helped through the implementation of the ID3v2 in-file-metadata standard for WAV and similar PCM files. Here, you avoid the need to kludge with folder structures and don’t need to reinvent the wheel when it comes to recording and replaying WAV files.

The high-resolution audio file formats will be of interest to serious video hobbyists and people who make money from film or video projects. Here, recording equipment that exploits these formats will need to work with standard SMPTE time-code data in the files along with exchanging the timecode through a small network including a Wi-Fi Direct segment.

This is important as we see the “prosumer” photography and video equipment that is valued by the hobbyists, the small-time wedding / corporate videographers and community TV groups become increasingly equipped with WI-Fi networking abilities. Additionally some of the video projects encountered by these people like weddings are anchored around musically-rich content such as live music performances, religious services or reception dances and the high-resolution audio files could do justice to this music.

This has to be easy to implement for the serious video hobbyist or small-time operator who is starting to get to grips with the concept. For example, an audio-recording device connected to a mixing desk to record a presentation or wedding could serve as a time-code master while two or more cameras with on-camera audio are used to capture video but referring to that time-code signal as their time-code.

As we see serious hi-fi buffs, people involved with the recording and reproduction of music and video content, along with musicians and music historians become aware of these high-grade file formats for sound data, the issue of backwards compatibility and searchability of content on the network domain will become real as these formats evolve.