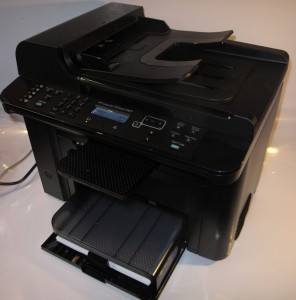 HP have now cottoned on to the NFC “touch-to-print” model that Brother was involved along with the Wi-Fi Direct “own-access-point” printing model to allow people with mobile devices to print from their own devices without using the business’s main network.

But this is not about junking a perfectly-good printer that is still giving sterling service for your organisation. Instead it is in the form of a black box that connects to recent-issue compatible HP business printers, some of which I have reviewed here such as the Colour LaserJet Pro CM1415fnw multifunction printer, Colour LaserJet 400 Series printer, the LaserJet M1536dnf multifunction printer and the OfficeJet 150 mobile printer.

This device is in the form of a black box that connects to the printer’s USB port, has NFC “touch-and-go” print for Android and Windows 8, as well as the Wi-Fi Direct / own-access-point functionality which works with HP ePrint and with Apple’s AirPrint systems. HP’s larger “workhorse” printers and multifunctions have a similar option but this is in the form of a module that is installed in the existing printer on site. The device, known as the 1200w Mobile Printing Accessory is to be normally offered for USD$50 / EUR€36 but initially offered for USD$40/ EUR€29. 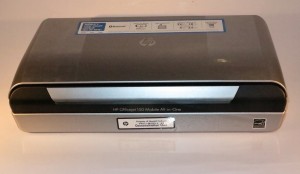 The idea would be that if you aren’t keen on having clients or business partners marauding on your business network when they need hard copy from their mobile device, you have them use the separate printing network for their quick-run printing needs.

As for the OfficeJet 150, this accessory would allow one to create a “back-of-the-van” mobile office around their smartphone or tablet especially if the effort is to do away with the regular computing environment on the road. It is because the iOS and Android platforms with the HP-supplied or platform-native printing apps are intended to work with a Wi-Fi wireless network segment rather than the Bluetooth or USB connections this printer natively supports.

This concept of offering the add-on devices can be seen as a way of effectively extending the life of most devices that are expected to put in a long service life and keeping their relevance to current needs and should never be tossed aside by device vendors.

What is this about “cyberflashing” and how to prevent it?