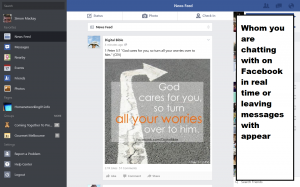 Those of you who like using your Sony VAIO Tap 20, HP x2 Series, Sony VAIO Duo 11 or other Window 8 touch laptop to stalk on Facebook can now do so using a Facebook client that is written to be part of the operating system’s Modern user interface.

Here, you have a 3-pane dashboard with a presence list of the friends you interact with on the right-hand side, the News Feed in the centre of your screen and the grey “selection” menu on the left. The right hand top corner has a one-touch access point for status updates, pending friend requests and conversations that are taking place. There is the same ease in which you can browse what is available, including photos whether as a screen show or as a tiled arrangement.

I have even browsed through various photo albums in a “slide-show” view and the viewing experience comes across very smoothly. For example, when a photo initially appears, you see it looking soft and less detailed but it arrives with more detail coming through. There is the ability to zoom in on an image as well as flick through the slideshows.

Even mouse users, which covers most desktop users, are cared for because you can still use your rodent to scroll up and down using its thumbwheel. The thumbwheel works properly with scrolling the various columns for the News Feeds, the chat you are having, the presence list and the like independently – it depends on what you are actually hovering over. If you flip through photos in someone’s album, you can use the thumbwheel to “speed” through them. Using the SHIFT key with the thumbwheel allows you to detail in and out of the photos.

Its behaviour through a conversation is as expected but I would like to see a “typing” indicator so I can know if they are typing a reply at a particular moment.

This is certainly an application that appears to be mature from the start rather than one that is bug-ridden and failing too frequently. Give this a go on your Windows 8 laptop as something to work the Modern UI with.