I am reviewing the Denon UrbanRaver AH-C100 in-ear stereo headset which is the cheaper in-ear model of the UrbanRaver series of bass-enriched headsets. These are intended to appeal to people who value the in-ear style of headphones or like their portability compared to a pair of over-the-head headphones.

The Denon UrbanRaver AH-C100 headset works as expected with most devices no matter whether they have the headphone jack or the full headset jack. 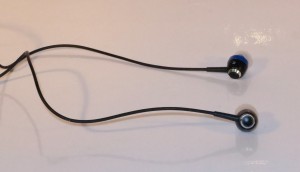 Earpieces for the Denon UrbanRaver headset

This may be a subjective remark but the Denon Urban Raver AH-C100 can be difficult to wear especially if the headset ear-adaptors that come with it don’t suit your ear canals. Once in place, they don’t cause any fatiguing even for a long journey.

Like a lot of in-ear headsets and earphones, the quality of the sound for the Denon Urban Raver AH-C100 headset is totally dependent on the earbuds fitting in your ear properly with the supplied ear-caps in place. I even tried using these earphones without the ear-caps in place as if you were to use them like earplugs but I didn’t get the full desireable response from them.

There is the tight bass response that is identifiable with the UrbanRaver headphone lineup but you still hear the “rest of the music” in the songs such as the vocals and melody-bearing or harmony-bearing instruments.

As for non-music content, there is the clear dialogue, and the tight presentation of sound effects coming out of the headphones which makes them work appropriately for private viewing of videos or private gameplay.

I have taken a call using the headset and can hear the correspondent’s voice clearly and they could hear me clearly.

I have used these headphones during a train journey from Ballarat to Melbourne using a Vline “Vlocity” diesel railcar train. These have a similar engine noise level to most transit buses or coaches as heard from inside the cabin. Here, I was able to hear the music material from my Samsung phone at a reasonable volume without the engine noise competing with the sound.

Motorcyclists who are most likely to buy headsets like this due to them being able to be worn in conjunction with their helmet may appreciate the noise reduction because they can hear what’s going on around them but not as much the noise from the machine under them.

There could be further work done on making the Denon UrbanRaver AH-C100 headset fit for most people especially if it could serve also as an “earplug” headset for colder climates.

As well, like with most of the headsets I had reviewed, a break-out plug and/or USB communications audio module would be nice to have to make these headsets work well with online gaming environments. This is more so with “gaming-rig” PCs or console audio adaptors that aren’t likely to have the four-conductor jack.

The Denon UrbanRaver AH-C100 headset comes across as a compact in-ear headset that you can stow away but need to make sure it fits properly every time you wear it for best bass response.

Here, they can come in handy for cyclists and motorcyclists who value using a headset in conjunction with their favourite helmet as they ride their bike on longer distances or want to keep on touch through that bike ride.