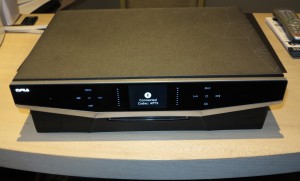 Previously I had reviewed the Rotel RCX-1000 as a network-capable CD receiver capable of high-quality sound from CDs, FM radio, DAB+ digital radio, Internet radio along with access to content held on one or more DLNA media servers. This, along with the Naim Uniti and a few others, was the kind of CD receiver you could pair off with a set of high-quality speakers of your choice, be a pair of new small bookshelf types that are on sale at the hi-fi store or that pair of good bookshelf or furniture-piece speakers that you had dusted off after finding them in your Dad’s garage.

This follows on from the music centres and casseivers of the 1970s and early 80s along with the steady run of high-grade integrated audio systems that Bang & Olufsen turned out i.e. the Beocenter 7000 series LP/cassette systems, the Beocenter 9000 series CD/cassette systems along with the Beosound 9000 6-CD system. This was also augmented with the Proton AI-3000 CD/cassette music system which came on the scene in 1988 and the arrival of the Bose Lifestyle music systems in 1990 and followed on with the Onkyo FR-435 CD/MiniDisc music system of the late 1990s.

Now Cyrus have launched the Lyric “full-width” CD-receiver range to the Australian market. This system which was premiered at the Australian Audio And AV Show which was held at the Intercontinental Melbourne The Rialto hotel, is one that follows from this lineage of integrated audio equipment that is about top-quality sound. Here, this unit can play CDs or tune in to FM, DAB+ or Internet radio broadcasts or stream in content from your NAS or PC-based network media server. It also uses Bluetooth with aptX to stream through content held on your smartphone or effectively work as your laptop’s sound-card. Here, I had seen the advance-preview sample in full-flight playing content from a smartphone via Bluetooth and driving a pair of newer “furniture piece” speakers that were being demoed at the show.

Even the way the product was styled eschewed various conventions like the classic “box with knobs and buttons” approach. Rather this used a touch-panel with a colour LCD screen for local control across the top half of the front panel along with a neatly-disguised CD-loading slot. This is similar to how the Bang & Olufsen Beocenter 9000 series was styled with a dynamically-lit-up touch panel below a large aluminium panel that had the CD and cassette bays hidden under doors that slid away.

This is definitely a sign of things to come for “integrated” lifestyle audio solutions that can work with any regular speaker, yet lead the way to a neat sound system that puts up some high-quality music.

Microsoft’s XBox One to satisfy the games-console reality

What is this private cloud functionality being touted with NAS devices?