I am reviewing the Rotel RCX-1500 network CD receiver which is one of the first “big-set” hi-fi units that I have reviewed that can do proper Internet radio and benefit from the DLNA Home Media Network. Previously I have been reviewing Internet radios that are mainly “small-sets” which are table / clock radios or portables and are intended for use as secondary or auxiliary audio devices.

This unit is infact a CD receiver, a class of “single-piece multi-function” hi-fi music system which continues from where the music centres and casseivers (receivers with integrated cassette decks) of the 1970s and early 1980s left off. Here, some of these units were equipped with the functionality and quality of modest separate-unit hi-fi systems yet they offered this in a single box, which you could just hook up a pair of speakers to. The manufacture of high-sndard pieces of this class of equpment had diminished through the late 80s. This is although Bang & Olufsen were consistent in this field at a premium price and a few other manufacturers like Proton, Bose and Onkyo were releasing in to their model ranges  one or two receivers with integrated CD, tape or MiniDisc transports that weren’t just second-rate music systems.

Then there had been a slow but sure renaissance in this class of good-quality integrated-function hi-fi equipment as the trend for “downsized” living especially in “executive” city apartments became more intense. This is where most of the good hi-fi names ran with at least one CD receiver in their line-up that didn’t come with a set of substandard speakers and this Rotel RCX-1500 that I am reviewing is one such piece of equipment.

This unit was tested with a pair of Cabasse Antigua MT30 bookshelf speakers connected using premium audio cables. These speakers were also on loan from the distributor so I can review this unit properly. They are built using an orthodox two-way driver arrangement and use a bass-reflex enclosure and can work with amplifiers that have a minimum power output of 75 watts and maximum of 500 watts. As far I was concerned, these speakers worked very properly with all kinds of music and could yield a decent sound for their size. 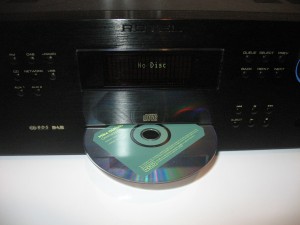 It is also worth knowing that this CD receiver has a pair of pre-out connections so one can connect it to a more powerful and better-sounding power amplifier or a pair of active speakers like an active subwoofer or some of the active speakers like B&O’s Beolab range or any of the Bose Powered Acoustimass speakers.

It can connect to your home network via Wi-Fi or Ethernet using supplied network-adaptor dongles. The Ethernet option can also allow it to be used with a HomePlug AV network segment using an appropriate “homeplug” adaptor and I would recommend this as a “no-new-wires” option for connect this CD receiver to the home network.

This functionality allows this CD receiver to provide Internet radio or work with a DLNA-compliant media server that is on your home network. The only limitation with this function is that it doesn’t work as a MediaRenderer which means that you have to select your network media using the Rotel CD receiver’s display.

The tuner is “up to the minute” with broadcast radio in Europe and Australia by supporting FM RDS as well as DAB+ radio. There are two antenna connections for both FM and DAB but you can choose to use the FM aerial for DAB. It came with two aerials – the typical “T-wire” for FM and a small whip one for DAB. With this one, it was able to pick up Melbourne’s DAB multiplexes reliably as long as it was near a window.

But I would rather that this unit be connected to an outdoor aerial especially for FM reception so it can provide clear signal reception. You may also be able to use a digital-optimised Band III aerial for better DAB+ reception especially on fringe areas.

You can connect an iPod or iPhone to the front USB socket using the data cable supplied with your Apple device and the sound that is played off the iPod will be converted to an analogue form using the Rotel receiver’s internal digital-analogue converter. As well, this same socket is used for playing music held on USB memory keys.

The CD player is a slot-load type that performs as expected for a decent-standard player. It can play the regular CDs or file-based MP3 discs and gives “best-case playback” for any CDs recorded with the HDCD mastering technique. This does yield to high-quality sound from these discs.

As for connection of external equipment, this is feasible with a line-in connection in the form of RCA connectors or SPDIF digital in the form of coaxial or optical connectors. There isn’t a line-out connection that is independent of the volume control for use as a recording connection, which may limit this unit’s utility with cassette or MiniDisc decks.

It is also controllable by a supplied remote control which has a numeric keypad for direct access to 30 presets in each of the radio bands – FM, DAB and Internet. As well, this remote also allows for direct access to tracks on a regular CD and is a preferred control surface when you are searching content on a well-stocked media server or using the CD receiver’s setup menus.

This unit’s amplifier is engineered for sound quality. Here, the volume control is a motor-driven potentiometer managed through the control on the front or the remote control. There aren’t any tone-control options, which may please audio purists who believe that tone adjustment affects sound quality.

The display is the white bright fluorescent display but uses four lines of text. This also works with the menu-based operation for advanced functions.

The sound quality for the Rotel RCX-1500 CD receiver is what you would expect for equipment in its class. This is even so with the Cabasse Antigua speakers that I am testing this unit with.

It comes across as being tight and good across all frequencies. This means that it gives all the instruments in a sound recording a proper chance rather than sounding like the old pub jukebox. This has come across so well with well-recorded rock like Peter Gabriel’s “1 – Car” album which was considered to be in the same league as Pink Floyd. Here, you still had that “punchy sound” while hearing the vocals and other instruments.

This system was even performing well with classical music especially as I was playing through a recording of Beethoven’s Violin Concerto which was done with “period” instruments. Here, the combination of this CD receiver and the Cabasse speakers shone through the whole of this popular concerto and was clear with all of the instruments.

As for handling the audio codecs, this amplifier answers the requirement for handling properly-encode music properly especially if you use the “maximum” throughput settings for the codecs like 320kbps MP3 or 192kbps WMA.

Limitations and points of improvement

The network connectivity could be improved on by not requiring the user to deal with easy-to-lose dongles. This is more so with Ethernet as most Internet-enabled hi-fi components and TVs use integrated circuitry with an Ethernet socket on the back.

As well, the Rotel could benefit from WPS setup for Wi-Fi wireless networks especially as most current-issue routers implement this easy-to-use setup method.

An improved version of this unit could support a proper tape loop and a phono input for use with a turntable especially as a lot of the older people may keep records or tapes lying around and could benefit from a simplified system with these inputs.

This is one network-enabled CD receiver that I would recommend for people who have a pair of good-quality bookshelf or “piece-of-furniture” speakers that they wish to keep going but want to benefit from newer sources like music held on their home network or iPod; or Internet radio. I would also consider this unit as a the core of a simplified music system if they want to choose their own good speakers.

This unit, along with the Cabasse Antigua speakers or bookshelf speakers of a similar standard, would be an ideal simple music system for use in an apartment or small house by people who place high value on music. It is especially more suitable with older retired people who are moving towards smaller flats or retirement villages.