I am reviewing the Braven BRV-X outdoor Bluetooth speaker which is effectively the “out-and-about” equivalent of the Braven 710 Bluetooth speaker. This unit is designed for rugged outdoor operation and even has a sound-optimisation mode for use when outdoors and you want to cover a large area. As well, it has the ability to charge other devices, mostly smartphones, Mi-Fi routers and the like, from its own battery as what most of the Braven speakers could do.

The Braven BRV-X Bluetooth speaker is designed from the outset to be rugged and suitable for use outside. It is housed in a rubber enclosure with a metal perforated grille and some rubber pads act as the speaker’s control surface. The screw cap, which reminds you of a jar’s cap protects the sockets on the back of the speaker from water and other contaminants. These lead to another Bluetooth speaker that excels when it comes to build quality. As well, they supply a carry strap which you thread on to the speaker to make it easy to carry. Unlike the Braven 710, this unit is charged using a supplied “wall-wart” power transformer rather than being connected to a computer or USB charger. 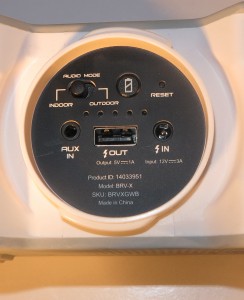 The unit is easy to set up and integrate with your phone, tablet or computer. Here, you can pair your Android or Windows NFC-capable device to the speaker using NFC-based “touch-to-pair” setup. On the other hand, you would have to pair Apple devices and other devices that don’t implement NFC by holding down the PLAY button until you hear a distinct tone before scanning for it using your device and the speaker will show up as “BRAVEN BRV-X” on the device list.

Like other Braven speakers such as the previously-reviewed Braven 710, you can pair the BRV-X with another Braven speaker to establish a wirelessly-linked stereo speaker pair for better stereo channel separation. As well, it can work as an external battery pack for most smartphones, “Mi-Fi”devices and the like, whether to offer “boost-charging” or extended run-time. This has the same power capabilities like the Braven 710 previously reviewed.

The Braven BRV-X speaker does sound clear but doesn’t come across with tight bass even for today’s bass-heavy popular music. It can be set for indoor or outdoor operation through a simple two-position switch. When set for indoor operation, it can come across as being a bit rich for bass while the outdoor position gives a brighter sound, apparently to cover a larger area.

Rubberised control buttons for your smartphone, tablet or laptop

I can adjust the speaker to just about the maximum level before it sounds awful but this would cover a small room or be good enough for listening while you are close to that speaker. Most likely, I would say it comes across as sounding like a lot of mid-sized portable radios commonly available during the 1970s or like a lot of the Internet radios previously reviewed on this site.

As I have said with the Braven 710, this could be released as a variant with an integrated radio tuner to serve as an FM or, perhaps, DAB+ digital radio.

Braven could implement an easy-to-attach carry-strap setup to improve on the useability of this unit with its carry strap. This could be achieved in a similar manner to the way the seatbelts work in your car where they clip in to place but are released when you push a button on the buckle.

I would recommend the Braven BRV-X Bluetooth speaker as a unit that would appeal to those of us who engage in a lot of outdoor activity and want to see it as a Bluetooth answer to the typical small portable radio that ends up being used outdoors.