I am reviewing the Sony VAIO Fit 13a convertible Ultrabook which converts between a 13” “portable-typewriter” notebook computer and a 13” tablet, which is something I am starting to see for this class of computer.

It is one of the few 13” highly-portable notebooks that is in a convertible form-factor where it can become a large tablet or media viewer. Here the screen folds over a hinge that is positioned in the middle of the lid to convert to these different form factors – as a laptop, tablet or a presentation viewer with a kickstand.

Some of you may find that a 13” tablet device as being too unwieldy when used in that form but I usually think of these devices as being the size of an A4/Letter-sized notepad or notebook or a placemat and still easy to stow in that shoulder bag. For example, the large screen area comes in to its own when viewing photos or videos or simply lounging on the couch browsing Facebook. In some cases, this large size also appeals to “head-to-head” situations where two people are viewing something on that screen like some photos or social-media chatter.

Of course, these convertible notebooks still earn their keep when you are typing up those notes in that “second-office” café while the barista is making that latte or cappucino on the espresso machine or as you type up that magnum-opus while you are on that long flight with it sitting on that economy-class tray table. 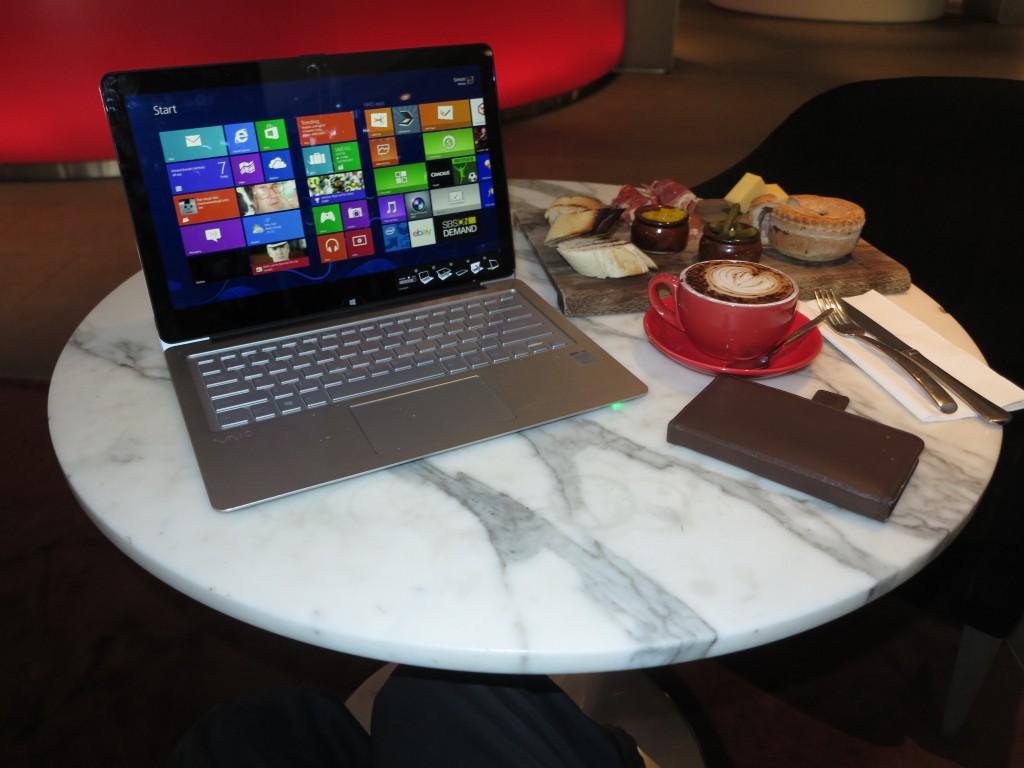 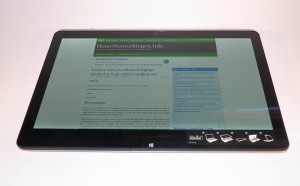 Set up as a tablet

The Sony VAIO Fit 13a is a well-built convertible notebook but for first-time users, the method to convert between notebook and tablet use can be daunting. Here, you have to flick the RELEASE-LOCK lever under the screen to the left and twist the screen at the top with both hands to make it become a tablet. Then you have to pull the screen up at the top to fold it to a conventional notebook. 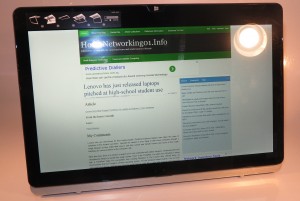 Set up as an image viewer

Even though I had used this on light tasks, there wasn’t any overheating going on with the VAIO Fit 13a although it felt warm underneath during some network video watching. There is some venting on the left side of the keyboard and any unoccupied sockets are forced in to service as vents. Personally, I would have some perforation underneath the keyboard to improve the ability for the notebook to cool itself. As well, the use of an all-aluminium lid and aluminium all over the keyboard surface also allows for better temperature control. 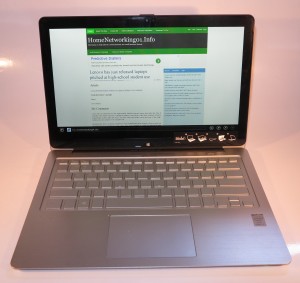 As a laptop conducive to typing

The keyboard is a full-width illuminated keyboard that is conducive to touch-typing. It has a proper feedback that makes you feel sure that you are typing the right characters and your hands aren’t “crunched in” which works well when typing up a large amount of content.

The trackpad works as expected and I haven’t even noticed it “jump around” when doing a lot of typing and can serve its role as a fine-level navigation tool while the touchscreen works well for coarse navigation and quick function access with recent software.

The NFC sensor is at the foot of the trackpad which is at the right place for sharing contact detail or Web links between your Android smartphone and the VAIO Tap 13a. This is also conducive for touch-and-go paring of small Bluetooth accessories like headsets but may be too awkward for pairing to larger equipment that implements “touch-and-go” Bluetooth setup like most of Sony’s newer audio equipment.

The Sony VAIO Fit 13a’s display was very responsive both with regular computer work as well with multimedia activity such as watching online video from SBS Australia. There is still the issue with the display being glossy which may annoy some users and is common with most consumer-targeted portable computers.

The audio subsystem is typical for most laptops where you don’t have the ability to hear the full range from the sound. This may be good enough when you are close to the screen but wouldn’t be good enough to fill a room. I still would recommend using a pair of headphones or external speakers when you are after the good sound.

The Sony VAIO Fit 13a has 128Gb of solid-state storage which would be enough for “second-office” work or short trips and may satisfy longer trips when you use auxiliary storage like a NAS or USB hard disk. It is still very quick and responsive but the capacity wouldn’t have me use it as a main or sole computer.

This is augmented by an SDXC card slot which comes in to its own when you “develop” your digital pictures from your digital camera or camcorder or show these pictures to a group of people.

Left hand side with power and audio sockets

There are two USB 3.0 peripheral sockets along with a headset jack and ah HDMI port for connecting external devices. It also connects to your network using 802.11a/g/n dual-band Wi-Fi technology, but you would need to use a USB Ethernet network adaptor if you are connecting to an Ethernet or HomePlug segment.

It also has Bluetooth with NFC functionality for “quick pair-up” with some newer  devices or transfer of data like contact details or Web links to and from newer Android and Windows phones.

I could use the Sony VAIO Fit 13a for a long time on most regular computing activities and even watching a 45-minute online video show from SBS Online had the battery to 50% capacity from full charging. This means that the VAIO is taking advantage of the current generation of Intel chipsets to work properly as a portable computer.

Other people who have seen the Sony VAIO Fit 13a in action have been impressed with certain features like the convertible form-factor and the large-screen tablet size. This is more so with people who are used to ordinary 10” tablets like the Apple iPad or not seeing much of the touch-enabled convertible notebooks.

For example, a waitress who works at a downtown (CBD) hotel restaurant which is used regularly as a “second office” during the day was impressed with the VAIO’s convertible design. This is something she doesn’t come across as often – she mostly sees the typical laptop or iPad-style tablet used by customers using the restaurant and bar as that “second office”.

Sony could offer a premium variant with an Intel i7 processor, 8Gb RAM and/or 256Gb solid-state drive as a deal-making option, especially if they want to use this model to court those of us who live out of our suitcases.

As well, the VAIO Fit 13a could be delivered with Windows 8.1 out of the box rather than users having to download the updates to bring it up to date to the newer Windows version. I would also look at improving the DC socket so it feels less fragile to use when connecting your charger to the VAIO.

The NFC chipset could be duplicated at the top edge of the keyboard to cater for “pairing up” with fixed equipment like Bluetooth speakers or stereo equipment whether the VAIO is set up as a tablet or a laptop.

I see the Sony VAIO Fit 13a convertible notebook as a viable contender to the market when it comes to the so-called “traveller’s computer” or “second-office computer”. This is more so in both these cases when you you want to view or show video or photo material on the go such as showing that presentation to the client over that latte or viewing that movie on the plane. It is more augmented by the fact that this computer works with a median performance requirement such as an Intel i5 processor and 4Gb of RAM.

It would also work well for those of us who like the idea of the tablet but want the proper full-size keyboard offered by the 13”-14” “portable-typewriter” notebook that is conducive to comfortable touch-typing for creating plenty of text-based content.